Dual Eligibles are individuals qualified to receive both Medicare and Medicaid benefits. Medicare is always the first payer of the two, and Medicaid is used for supplemental coverage, premium and cost-sharing assistance, and payment for services not covered by Medicare.[1]

In 2008 there were 9 million dual eligibles[2] and 9.6 million in 2010;[3] that number will continue to increase with the expansion of Medicaid through the Affordable Care Act (ACA) and the increase in the American population over 65 years of age. 59 percent of duals are over the age of 65 and therefore qualify for Medicare based on age rather than health status.[4] One-half of all dual eligible have three or more chronic conditions, two-thirds are women, and 56 percent have yearly incomes below $10,000.[5] This population is more likely to report fair to poor health, mental and functional impairment, and is thirteen times more likely to live in long-term care facilities than non-dual eligibles. [6]

Medicare eligibility requires beneficiaries to meet one of the following three criteria: be 65 years of age or older, have exhausted their Social Security Disability Insurance (SSDI), or have end stage renal disease or amyotrophic lateral sclerosis (ALS).[7] In 2008, dual eligibles comprised 19.5 percent of the total Medicare population, and resulted in 31 percent of total Medicare spending.[8] The average Medicare spending on dual eligibles is 180 percent higher than spending for the general Medicare population, totaling $132 billion in 2008; most of this spending was on dual eligibles over 65 years old.[9]

The ACA included a number of reforms in the way dual eligibility is managed. It calls for the creation of a Federal Coordinated Health Care Office (FCHCO or Duals Office) with the purpose of ensuring that dual eligibles and beneficiaries have access to all available benefits, and to help states, Medicare Advantage plans, doctors, and other interested parties to better align benefits.[16] The ACA also called for a Center for Medicare and Medicaid Innovation (CMMI or Innovation Center) to test payment and delivery reform models to lower costs.[17]

The ACA contains provisions eliminating Part D cost-sharing for duals who would be institutionalized but-for home and community-based services programs, and created an optional program for states to develop Health Homes for dual eligibles with multiple chronic conditions.[18] The purpose of the program is to have optimally integrated care for beneficiaries of the two programs. The ACA incentivizes creating these homes with a 90 percent federal match rate.[19]

To meet the ACA’s goals, the Department of Health and Human Services (HHS) has created the Duals Office and Innovation Office, as well as begun moving forward with demonstration projects in 26 states experimenting with different methods of increasing program integration and minimizing program costs for dual eligibles.[20] The biggest hurdle experts are anticipating in the demonstration projects will be reconciling federal and state interests in the two programs with surrendering control to states, private contractors, or insurers who will manage the programs.[21]

The demonstrations projects differ widely by state, but most utilize capitated managed care models where insurers compete to insurer/manage care for the dual eligible population. Some states have fee-for-service models with similar bidding structures.[22]

The relative success of these projects is still unclear, but more were initiated in 2014 and it is likely the trend will continue in the upcoming years.[23] 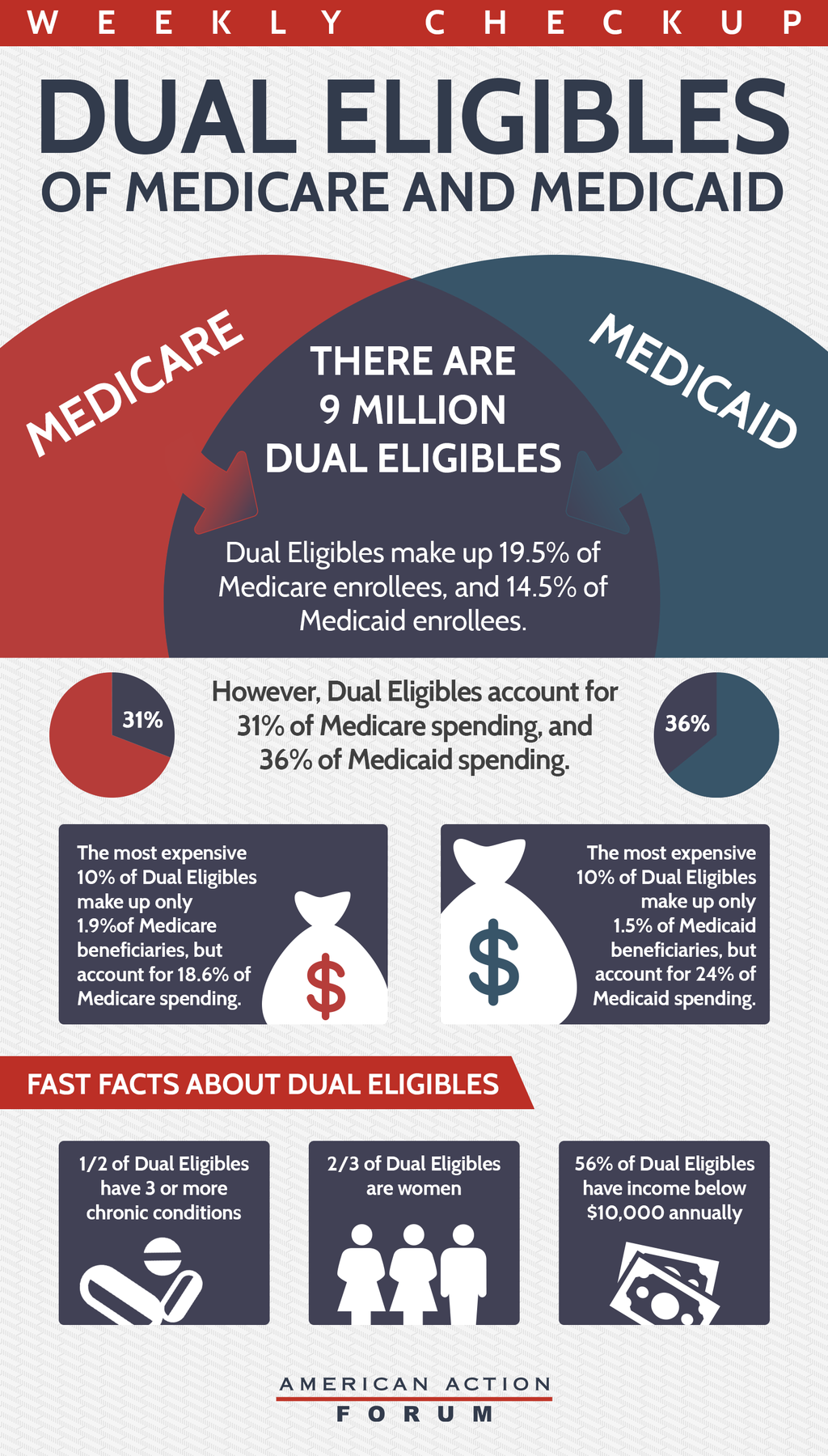 [14] Commission on Medicaid and the Uninsured, The Diversity of Dual Eligible Beneficiaries: An examination of services and spending for people eligible for both Medicaid and Medicare, Kaiser Family Foundation (Apr. 2012); http://kaiserfamilyfoundation.files.wordpress.com/2013/01/7895-02.pdf.

[20] Drew Altman, Pulling it together: Duals: The national health reform experiment we should be talking more about, Kaiser Family Foundation (Jun. 01, 2012); http://kff.org/health-reform/perspective/pulling-it-together-duals-the-national-health/.