This week the Social Security and Medicare Trustees released their annual reports on the relative health of the nation’s entitlement programs (check out AAF’s analysis here). There has been a fair amount of buzz in recent weeks regarding the reports’ tardiness—and whether the administration was delaying their release to avoid broadcasting Medicare’s pending insolvency while congressional Democrats are seeking to massively increase Medicare spending. Of course, now that the numbers are out there, the fight to spin them begins. Putting aside that noise, however, here is the utterly unsurprising takeaway: Medicare is rapidly running out of money to cover program costs.

According to the Medicare Trustees, the Medicare Trust Fund, which covers hospital services, will be exhausted in 2026, and incoming revenues have long been insufficient to cover expenditures. Some are spinning this as good news, considering worries that the COVID-19 pandemic could have accelerated the timeline. Focusing on that silver lining appears to be an attempt to obscure the looming thunderclouds, however. In 2018, 2019, 2020, and now 2021, the Trustees have told us the same thing: Medicare will run out of money in 2026. The situation is real, and the figures are clear—it’s not a recurring typo, or even right-wing fear mongering (the current Trustees are all Biden appointees). The only thing that’s really changed is that the insolvency date is now a year closer. Unfortunately, that’s how calendars work.

AAF’s Jackson Hammond and Gordon Gray provide all the details here, but let’s look at some highlights (or more appropriately, lowlights) from the report. Medicare’s revenue in 2020 was $430.3 billion, but the program spent $925.8 billion for a total shortfall of $495.5 billion—for which my as-yet nonexistent grandchildren will surely one day receive a bill. Medicare’s 2020 cash shortfall represented 16 percent of the federal deficit last year. In fact, year-over-year Medicare shortfalls now account for nearly a third of the federal debt. While progressives want to lower the Medicare eligibility age and add coverage for vision, hearing, and dental, it would take a 32.6 percent increase in the Medicare payroll tax just to cover last year’s Part A shortfall for existing benefits, and Medicare premiums would have needed to be $4,797 higher per beneficiary in 2020 to cover the Part B cash deficit.

The looming Medicare crisis has many authors, and the program’s dire outlook has been clear for years, but previous administrations and Congresses have simply looked the other way. As Hammond writes, “The Obama Administration oversaw a $2.4 trillion cash shortfall over 8 years (2009-2016), while the Trump Administration oversaw its own $1.6 trillion Medicare cash shortfall.” President Biden is on track to continue the trend with the Trustees projecting a nearly half-billion cash shortfall in his first year. President Biden may not be responsible for the current predicament—or rather, considering his decades of service in the Senate and as vice president, not solely responsible—but if he secures a second term, he will be the one left holding the bag. One would think this would make him a little more concerned with addressing the problems, rather than exacerbating them.

Sticking our collective heads in the sand and wishing Medicare’s solvency issues away won’t fix anything, and progressive efforts to expand the program will only accelerate the program’s collapse. This week, the Trustees reminded us that Medicare’s day of reckoning is coming—and it’s one year closer.

The 2021 Medicare Trustees report, finally released on August 31, provides a clear picture of the Medicare program’s fiscal state. As my colleague Christopher Holt explains above, Medicare is in dire fiscal straits, with an ever-growing financial shortfall. This shortfall is simply explained: Medicare expenditures outstrip program revenue almost every year since 2009. The chart below illustrates the yearly income and expenditures every 10 years for Medicare since 1980. Unsurprisingly, there has been an explosion in both. Some efforts have been made to address Medicare’s revenue problems, including legislation passed in 1993 removing the maximum amount of income that could be taxed for the Hospital Insurance trust fund, increased funding transfers by the Treasury from general revenues to the Supplemental Medical Insurance trust fund, and increased premiums for beneficiaries. Additionally, taxable income has grown over time. Expenditures, however, have increased even more rapidly as health care costs have gone up significantly since 1980, along with the number of Medicare beneficiaries. 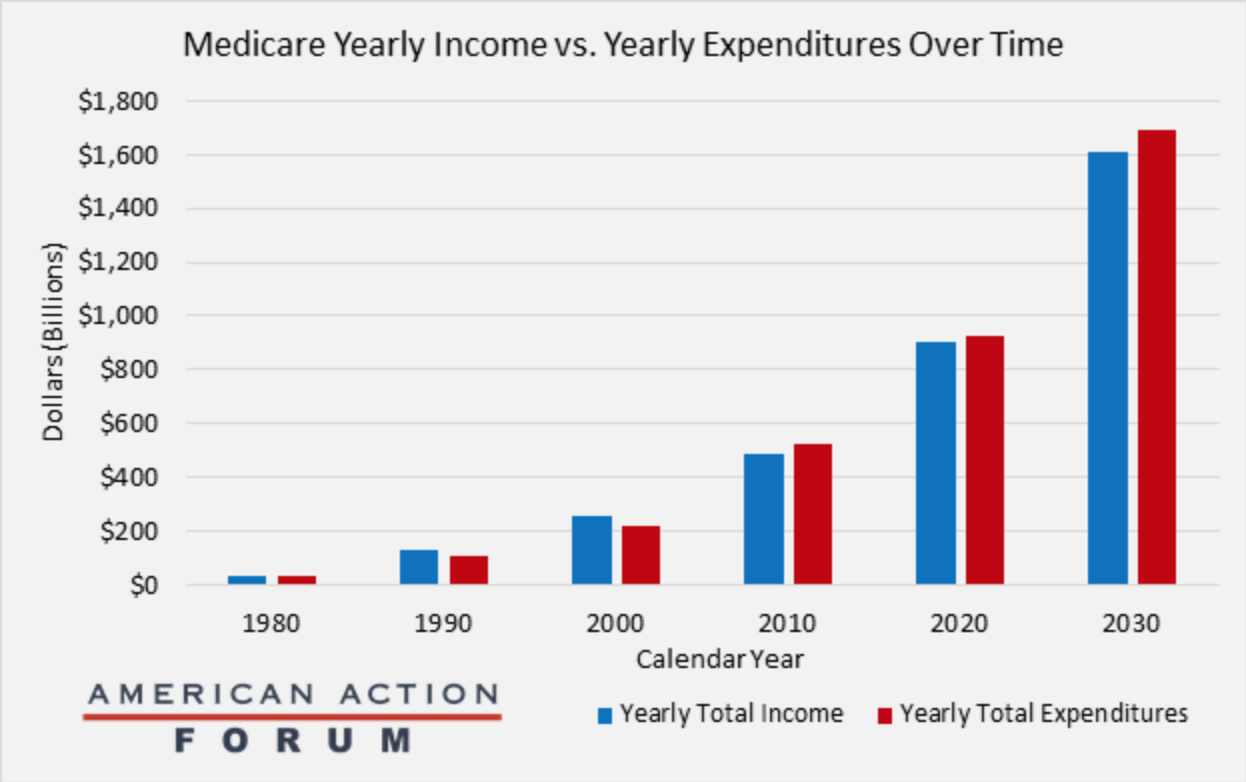