On Monday the American Action Forum’s (AAF) Center for Health and Economy (H&E) released our cost and coverage estimates for the proposed Build Back Better (BBB) legislation’s non-Medicare proposals, and on Tuesday the Congressional Budget Office (CBO) followed suit. Based on the two cost analyses, making permanent the American Rescue Plan Act’s enhanced premium tax credits and closing the Medicaid coverage gap would cost between $553 billion and $831 billion over 10 years, and would result in between 3.9 million and 7 million people gaining health insurance coverage at the end of 10 years. The most obvious takeaway is, that’s a huge amount of money to cover a not-huge number of people. A less obvious—but important—takeaway is that that the BBB also results in a significant amount of disruption for people who are already insured.

The topline numbers are relatively straightforward. H&E projects the provisions as currently drafted will cost $831 billion and will lead to a reduction in the number of uninsured of 7 million in 2031 relative to current law. CBO shows lower total spending levels—$553 billion over 10 years—and around 44 percent fewer individuals newly insured, 3.9 million in 2031. Both H&E and CBO expect that increasing the size of the premium tax credits and expanding eligibility for them on a permanent basis will cost about $209 billion, but the two scores differ more substantially on the Medicaid provisions, which account for the bulk of the cost and enrollment divergence between the two scores.

Those differences are largely the result of different baseline assumptions about future state actions on Medicaid expansion, and how the cost and covered lives resulting from the policies should be counted relative to the baseline, rather than disputes over how much the provisions themselves will cost. For a more in-depth discussion of those modeling assumptions, check out the latest edition of AAF’s podcast, The AAF Exchange.

The most notable takeaway from the topline numbers is simply that—when accounting for proposals to provide Medicare coverage for vision, dental, and hearing services—the reconciliation bill as currently drafted likely includes more health care spending than the Affordable Care Act (ACA) did in its first 10 years. But while the ACA has led to roughly 30 million more people receiving health coverage, these proposals aspire to cover no more than 7 million, and perhaps quite a bit fewer.

A second, less obvious point comes from a careful examination of CBO’s analysis. Much of the impact of the reconciliation bill is directed at moving people from one source of insurance to another. For example, CBO anticipates that the number of people receiving coverage through the ACA’s exchanges will increase by 3.6 million, but only 1.4 million will have been previously uninsured, and 1.6 million will arrive there after having lost their employer-sponsored insurance (ESI) because of the legislation. And for legislation supposedly aimed at helping the poor and vulnerable, CBO surprisingly projects that 65 percent of those who gain subsidized exchange coverage under the law will have incomes above 400 percent of the federal poverty level.

Turning to Medicaid, CBO expects Medicaid enrollment to increase by an average of 4 million annually  between 2022 and 2031, but only around 2.3 million of those people would be gaining coverage; the rest would be moving into Medicaid from either the individual market (roughly 700,000 individuals who would have been almost entirely subsidized) or ESI (a little over 1 million individuals who either lose their ESI or elect to enroll in Medicaid instead).

Congress and the White House will have to scale back these proposals to some degree in order to reach an agreement that can become law, but as currently drafted the BBB reconciliation bill would likely spend more than the ACA to insure between 4 and 7 million previously uninsured people, while causing substantial disruption to insurance coverage for millions of people who are already insured. These are the sort of outcomes one should expect when policymaking is driven by ideology rather than common sense.

Last week, the American Action Forum’s Center for Health and Economy (H&E) reported that health insurance provisions included in Build Back Better (BBB) legislation—specifically, making permanent the expanded American Rescue Plan Act’s enhanced premium tax credits, providing new reinsurance funding, and closing the Medicaid coverage gap—would reduce the uninsured population by 7 million in 2031 relative to current law and would cost taxpayers a total of $831 billion from 2022 to 2031. Stephen Parente and AAF’s Christopher Holt dive into the details here. Of the $831 billion total, the proposal to make permanent the enhanced premium tax credits and related individual market policies would make up $209 billion, and proposals to close the Medicaid coverage gap in non-expansion states would cost $622 billion. Proposals to close the Medicaid coverage gap would initially extend (from 2022 to 2024) individual market coverage to the 2.2 million people in non-expansion states who are not eligible for Medicaid and are below 100 percent of the federal poverty level; in 2025, these individuals would be transferred into a newly established Federal Medicaid Program. This phase-in is demonstrated by the change in funding in the chart below. The H&E analysis was based on legislative text from Senate and House committee markups released in September, but as it has become increasingly clear that the final package will need to be scaled back significantly, it is unknown which provisions will be cut from the final text. 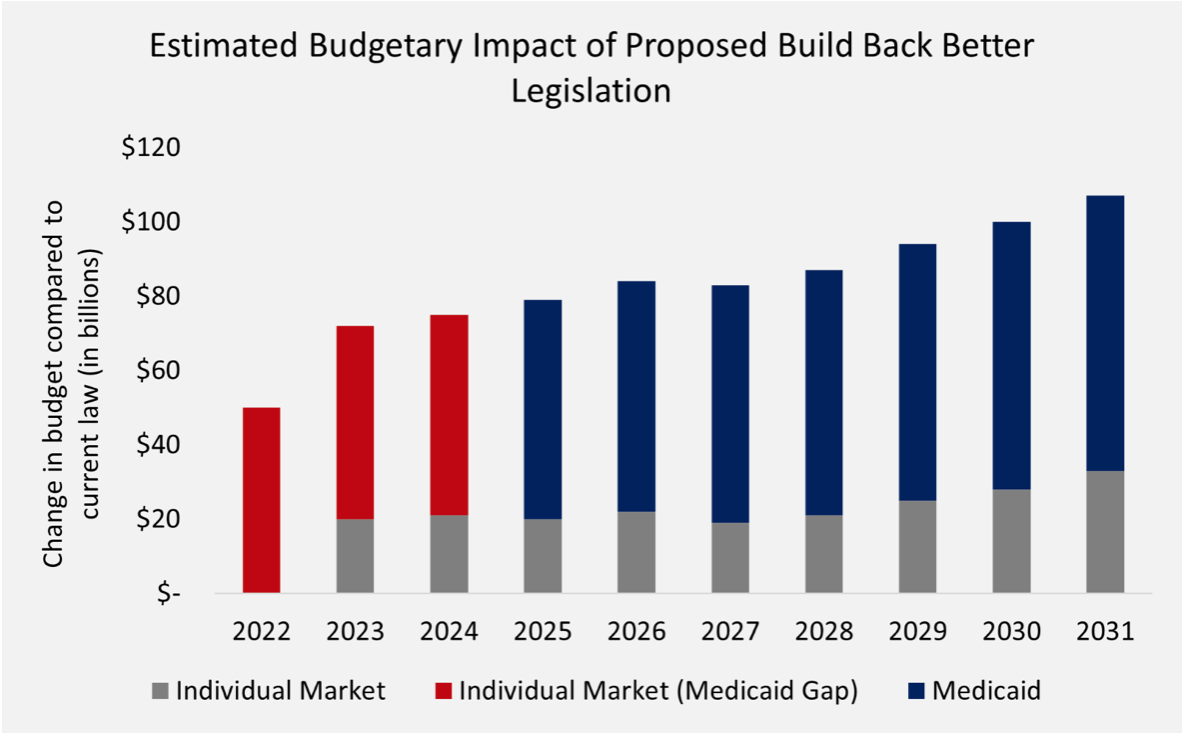 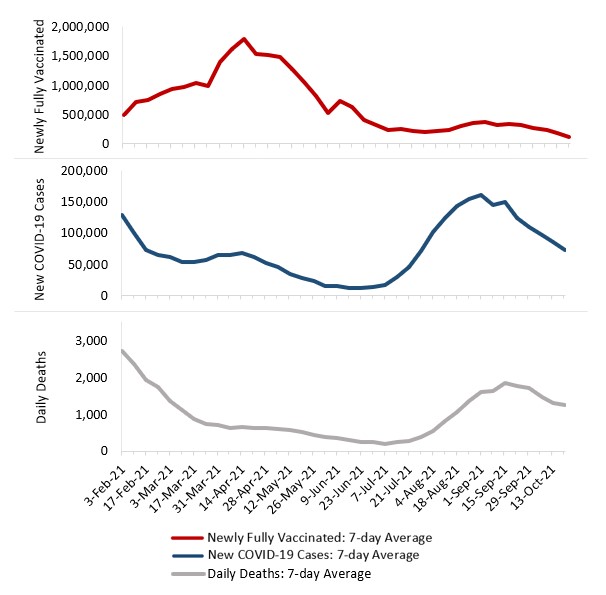