Where, Oh Where, Will ARPA-H Go?

Have you heard of the internet? What about GPS? Autonomous vehicles? How about the computer mouse? All of these inventions (and a lot more) were originally projects at the Defense Advanced Research Projects Agency (DARPA), the wildly successful government research agency that was founded in response to the Soviet launch of Sputnik. DARPA was invented to take high-risk, high-reward ideas and turn them into immediately usable discoveries. Now, President Biden wants to use this model for health initiatives to find real, actionable treatments and cures for deadly and rare diseases.

To that end, Congress has crafted H.R. 5585, the Advanced Research Project Agency – Health (ARPA-H) Act, and has proposed funding in both the House and Senate fiscal year 2022 appropriations bills. The House legislation, however, would make ARPA-H a stand-alone agency in the Department of Health and Human Services, while both the House and Senate appropriations bills would place the agency under the National Institutes of Health (NIH). The placement of the agency has turned into a fight on the normally bipartisan issue of medical research funding. The president has repeatedly stated he wants ARPA-H at NIH, and so has his new science advisor, former NIH Director Dr. Francis Collins. But why does it matter?

First, the arguments for placement at the NIH: The NIH is the nation’s premier health research agency and has contributed greatly to biomedical and scientific research. The agency has the legal and administrative infrastructure necessary to host ARPA-H already in place. It is also a well-known entity with routine bipartisan support in Congress (more on that later). Putting ARPA-H under the NIH would theoretically allow ARPA-H to build on the work at NIH more effectively. At first glance, it makes sense to house our next big health research agency under our nation’s most prestigious health research agency.

But if ARPA-H was just another targeted research agency, we wouldn’t need a multi-billion dollar funding package for it. In fact, we probably wouldn’t need it at all – Congress could just tell the NIH to take bigger risks in its research. As a quick reminder, the NIH does basic research to lay the groundwork for a wide variety of health fields; in essence, the research that other research is built upon. But ARPA-H is not intended to be just another research funding scheme. It is designed to produce tangible outcomes from its research projects. It takes massive risks or there’s not much point in having it. Part of the reason the NIH can’t take such risks is its grant structure: A peer review committee is set up with outside experts to decide if a project has merit. These experts are often the people who came up with the  “conventional wisdom,” and approach projects with the question: “How is this relevant today?” In the “Mean Girls” world of academic cliques, people without the right connections or background may not be high on the grant recipient list. Moreover, these peer review boards are far more likely to fund ideas that they’re already familiar with, ensuring whatever new information comes out of the project is less likely to be groundbreaking. Fortunately, ARPA-H would be set up with a project-management-style system, which – if given independence from political and bureaucratic red tape – prioritizes the ability of a project manager to find and lead innovative projects over subject-matter expertise. That “if” part is important.

Four of the five witnesses at a recent House Energy and Commerce hearing all agreed (with the fifth being simply non-committal): The culture at NIH is slow, cautious, and relies on the conventional wisdom. If you’re looking for an agency to take big, bold risks in research, that’s the exact opposite of the culture you want. To give us things like the Cancer Moonshot championed by President Biden, ARPA-H needs a far less risk-averse culture than the NIH can provide.

Additionally, the bipartisanship enjoyed by the NIH has come under fire in the last two years. Senator Rand Paul’s infamous exchanges with Dr. Anthony Fauci, nominally about the NIH’s involvement in coronavirus research in Wuhan and generally about the handling of the pandemic, point to many Republicans’ exasperation with the health establishment. To quote one Senate GOP aide: “…Republicans in the House worry ARPA-H will become another slush fund for Fauci-minded scientists — unchecked scientists who will use more government money just to curate their public image rather than get results.” So tying ARPA-H to an agency facing increased scrutiny over its funding choices is not likely to help its cause.

ARPA-H, if done right, is the exact type of initiative America needs to remain the world leader in biomedical research. But to do that job right, ARPA-H needs to be given a clean slate without being weighed down by the current cultural and political pitfalls at the NIH. Without it, this new body may not  give us the groundbreaking discoveries of the future.

The Centers for Disease Control and Prevention (CDC) released a report this week describing maternal mortality rates in the United States in 2020. Overall, 861 women died of maternal causes in 2020 and the maternal mortality rate was 23.8 per 100,000 live births—the highest since the CDC implemented its Pregnancy Mortality Surveillance System in 1987. Consistent with previous trends, non-Hispanic Black women of all ages remained at the highest risk of maternal mortality (55.3 deaths per 100,000 live births) compared to all non-Hispanic White women (19.1 per 100,000) and all Hispanic women (18.2 per 100,000). For women of all races and ethnicities, those aged 40 and older had a significantly higher mortality rate compared to younger women with 107.9 deaths per 100,000 live births in 2020—a rate 7.8 times higher than that of all women younger than 25 years. Within each race, maternal mortality rates increase with maternal age, as seen in the chart below. When comparing across races, however, non-Hispanic Black women younger than 25 years had a higher mortality rate than that of both non-Hispanic White women and Hispanic women aged 25-39 years. Amid stalled legislation for sweeping health care reforms, these trends demonstrate a continued need for targeted proposals to improve maternal care and expand data collection and review in the United States, especially for the most at-risk populations. 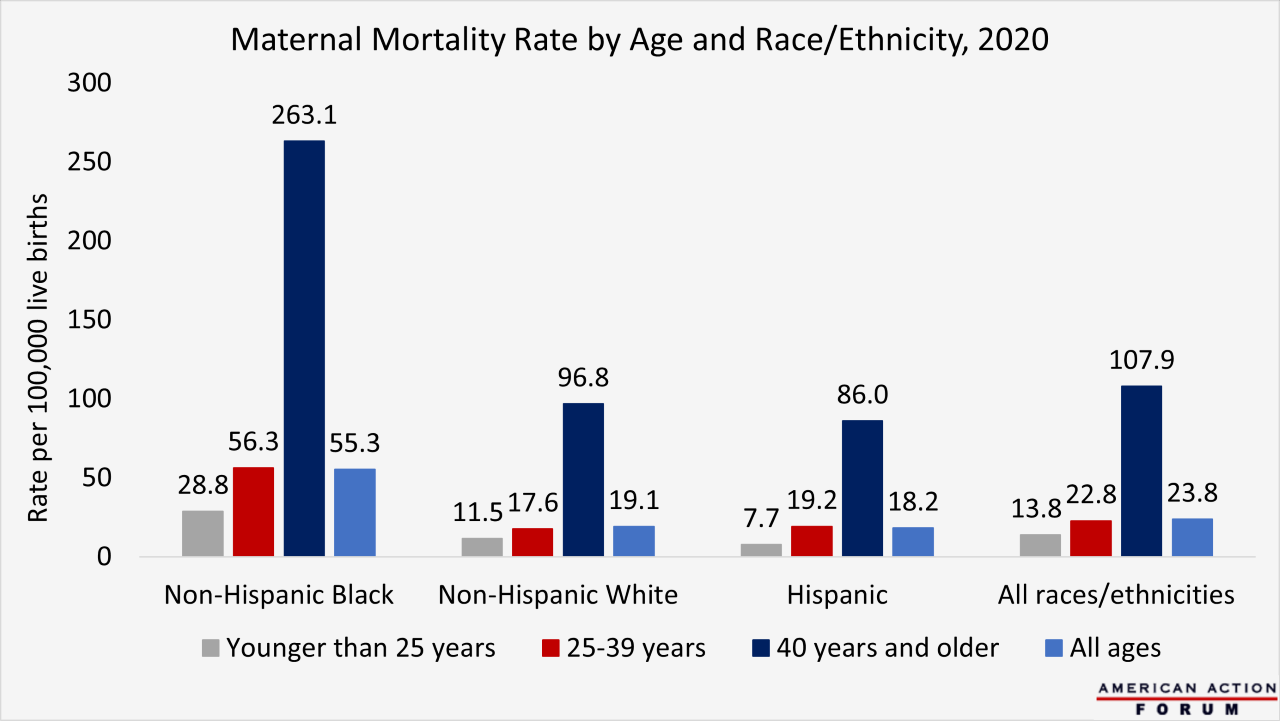 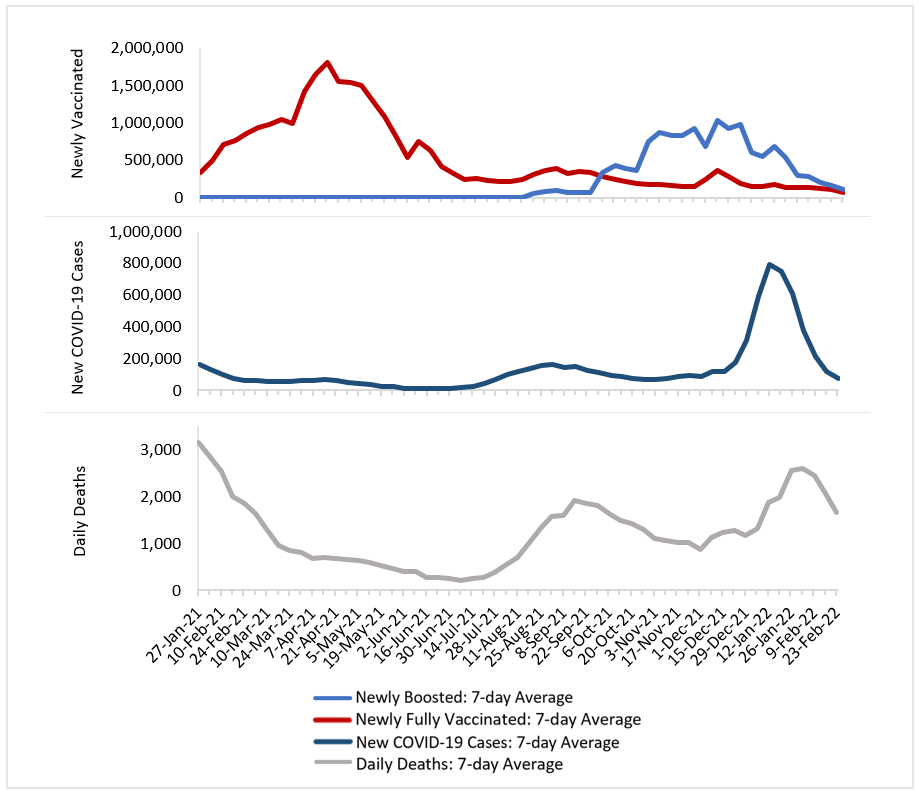