Some Depressing Stats to Start Your Week

Eakinomics: Some Depressing Stats to Start Your Week

Today’s effort to fulfill my obligation to find the dark cloud for every silver lining is to draw your attention to the recent paper on maternal mortality by AAF’s Tara O’Neill Hayes. When I read it, I was genuinely shocked that “The U.S. maternal mortality rate has significantly increased from 7.2 deaths per 100,000 live births in 1987 to 16.7 deaths per 100,000 live births in 2016.” These data are from the Centers for Disease Control (CDC); other studies put the maternal mortality rate (MMR) as high as 23.8 in 2014. Regardless, the United States has one of the highest MMRs in the world, and roughly 60 percent of these deaths are preventable.

Hayes points out that “Among 2,990 pregnancy-related deaths observed in a recent CDC study, 31 percent occurred during pregnancy, 36 percent occurred on the day of delivery or within six days post-delivery, and 33 percent occurred one week to a year postpartum. As these numbers imply, a range of reasons contribute to maternal mortality in the United States.” Among those reasons is the fact that one-third (up by 500 percent from the 1970s) of American mothers delivers their babies via cesarean section (C-section), compared with roughly one in five women worldwide.

In addition, access to insurance (which affects both prenatal care and the likelihood of a C-section) contributes to the U.S. MMR, as does the rising age of pregnant women. But one of the most striking features that sticks out in the data is the differences in MMRs across races and ethnicities. (See chart, reproduced from the Hayes paper.) 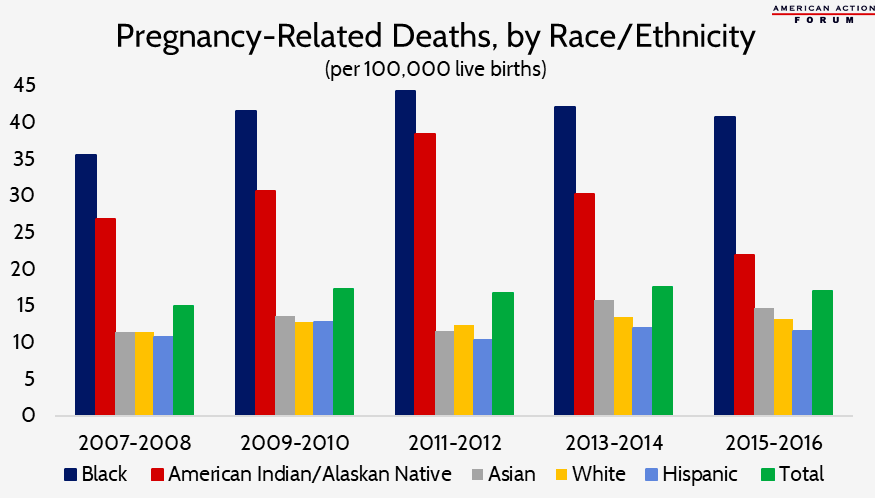 It is depressing — as promised — but not hopeless. At a time when the policy world is filled with radical promises of sweeping health care reforms, it seems like a no-brainer to focus some attention on a targeted problem like the MMR. Hayes argues, “A good place to start for improving maternal mortality would be to increase monitoring of and adherence to safety recommendations and best practices developed by the Joint Commission or the Alliance for Innovation on Maternal Health Program, which the American College of Obstetrics and Gynecologists and other provider groups created.” This effort could be paired with the implementation of the Preventing Maternal Deaths Act of 2018, which provides federal grants to states for investigating the deaths of women who die within a year of pregnancy, supporting state maternal mortality review committees that collect and report standardized data on maternal deaths to inform quality improvement efforts.

Reclassifying gig economy workers to employees would impact over 13 million workers who produce over $1.6 trillion in economic output.