President Obama signed executive orders (13,563 and 13,610) as part of an effort to “eliminate red tape.” Federal agencies were told to “modify, streamline expand, or repeal” existing regulations. The recent “retrospective reports” from the administration reveal that executive agencies have added more than $14.7 billion in regulatory costs and 13.4 million paperwork hours. Too often for this administration, regulations are regularly expanded and rarely repealed or modified.

The American Action Forum (AAF) reviewed the most recent publicly released plans from cabinet agencies. These “retrospective reports,” mandated by Executive Order 13,610, are supposed to contain ideas that will streamline or eliminate redundant regulations. Instead, they are frequently filled with rules that impose new costs and are tenuously related to “retrospective review.” AAF found:

As with virtually every report, there is one agency that shines by reducing burdens and one that imposes a majority of the costs under the guise of retrospective review. This update lacks the former, but HHS fills the void of the latter. The agency is responsible for 81 percent of the net cost increase and 32 percent of the net paperwork surge. HHS had five rulemaking updates that quantified costs, but only one actually reduced burdens.

Incredibly, the “Medicaid Mega Rule” was contained in the agency’s review report; the measure adds $3 billion in long-term costs and more than 1.9 million paperwork burden hours. As AAF detailed here and here, the paperwork section of the proposal spanned more than 125 pages and it would micromanage and restrict many aspects of Medicaid. Yet, somehow, it is viewed as a deregulatory measure. If a $3 billion revamp of Medicaid is “retrospective,” then virtually every new rulemaking should fit that moniker as well.

HHS also included “Head Start Performance Standards” in its retrospective plan. Admirable on its face, this administration’s proposal actually adds $928 million in annualized costs and more than 470,000 paperwork burden hours. According to the agency’s own math, it could also result in 1,400 to 4,400 teachers losing their jobs and more than 12,800 students losing services.

The Department of Education takes the undistinguished silver medal, planning to add $1.4 billion in net burdens and seven million paperwork burden hours. The agency quantified three new rulemakings and none reduced costs or paperwork. The largest imposition, a measure for “Unified and Combined State Plans,” strangely does not address how the proposal is supposed to streamline the regulatory system to implement the directives of the executive orders. In Education’s update, they merely state, “Estimates of the costs and benefits of these proposed regulations were set forth.” They were, to the tune of $1.4 billion and 2.3 million hours. After including the controversial “Gainful Employment” rule in previous reports, it appears the administration wants to double-down on onerous new regulations masquerading as regulatory cuts.

Below is a snapshot of just how much of a burden HHS and Education plan to add compared to other agencies (The blue bar represents costs, with the red bar representing paperwork.) 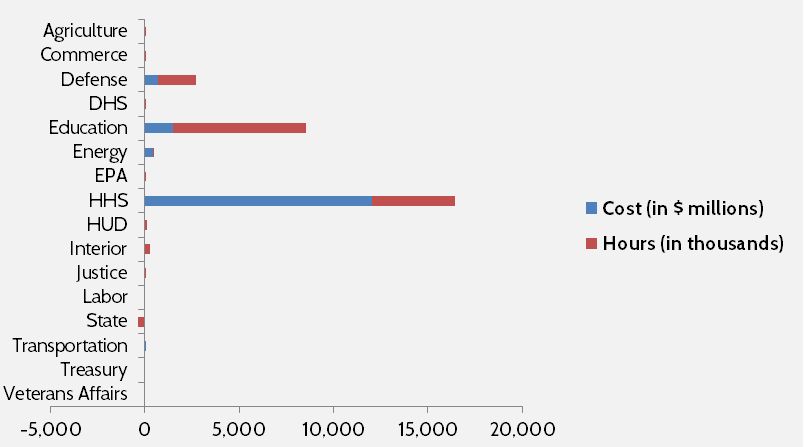 Did the administration manage to eliminate any red tape from these latest reports? Yes, but these measures were outliers and hardly the norm. Surprisingly, EPA proposed net cuts of more than $5 million. Amending its lead-based paint programs could save $9.8 million.

If there were any clear leader, the Department of State didn’t propose any regulations that would increase costs and put forward three rules that could eliminate paperwork. Combined, the agency plans to remove more than 380,000 hours of paperwork. In its past four reports, the Department of State has cut paperwork every time. However, its cuts are dwarfed by the millions of hours of additional paperwork from other agencies.

A Culture of Retrospective Review?

For example, many agencies recycle past rulemakings from one report to the next. On average 86.6 percent of the regulations contained in the most recent report were listed in past reports. See below.

The administration might defend this record, noting that rulemakings can take many years to complete. True, but some agencies aren’t proposing any new initiatives and the average agency report contains just three novel regulatory reforms. With all of the problems at the Department of Veterans Affairs, it couldn’t manage to develop a single new reform initiative?  The Department of Energy, one of the most active regulators in the federal government, proposed just one new measure that doesn’t even cut costs or paperwork? This culture of retrospective review is little more than an attempt to promote additional regulation under the veil of “eliminating red tape.”

Out with the old, in with the new. This might be a sensible aphorism to use when cleaning out the regulatory thicket, but instead this administration has simply piled new rules on top of old. Despite, the Department of State’s efforts, the administration has added approximately $14 billion in costs from its most recent “retrospective reports.”