August: The Dog Days of Regulation?

Last week, Congress left town for its traditional, month-long August Recess. Meanwhile, the Environmental Protection Agency released the final version of its burdensome “Clear Power Plan,” and the Securities and Exchange Commission finalized its less-covered, yet still consequential, “Pay Ratio Disclosure” rule. Last August saw two major final rules hit the books with more than $11 billion in combined total costs. Is there any cause for concern that, while Congress is away, the agencies will play? Certain data trends seem to suggest “yes.”

Highlighting only a handful rules from year-to-year largely leads to only anecdotal evidence. What about broader trends? Using the Government Accountability Office (GAO) database on major vs. non-major rules, one finds that general trends over the past decade (across two administrations) do suggest that August is an abnormally active month for regulators. First, in terms of major rules, there have only been two years since 2005 when August did not exceed the average rate of the other months: 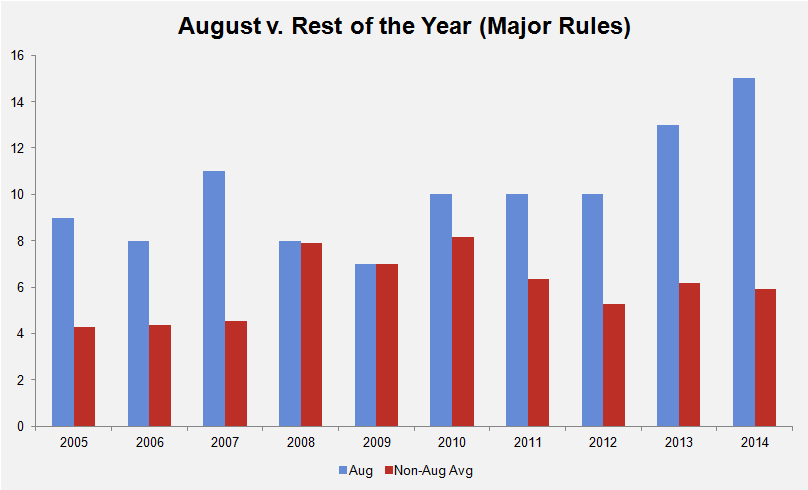 The only years when August did not outpace its fellow months were 2008 and 2009. Even then, they were roughly equivalent. The phenomenon known as “midnight regulation” – where an administration rushes certain rules between the election and the next administration’s inauguration – likely accounts for the relative parity in those years. It is also worth noting the steady increase in August major rule publications starting in 2012.

While major rules naturally account for the most substantial economic effects, their actual volume is a minute percentage of the overall regulatory picture. The following uses the same GAO data to illustrate the trends across all final rules published in a given year: 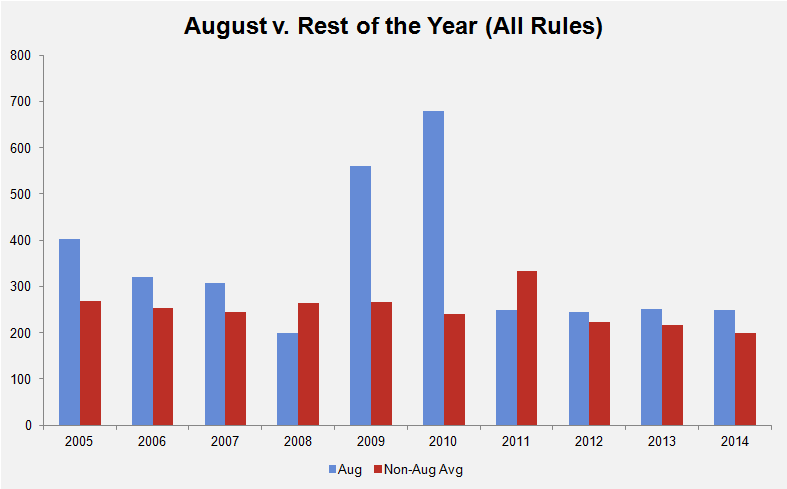 Although not as pronounced as the major rule data, the overall picture suggests there is still a general trend towards more activity in August than other months. It is also difficult to say with much certainty why 2009 and 2010 were such outliers. For 2009, it could be that many of the then-newly inaugurated Obama administration’s freshly proposed regulatory priorities simply came to fruition naturally and coincidentally in that August. The 2010 spike could largely be due to some of the provisions of the Affordable Care Act and Dodd-Frank, both enacted earlier that year.

The above data establishes that there is, in general, some measurable increase in rules published in August relative to other months. The next step is to examine the impetus for this increase. Each spring and fall, agencies are required to include their regulatory plan under the administration’s Unified Agenda. These timelines show when agencies plan to finalize particular rulemakings.

The following graph illustrates the overall trends in entries for more than 400 major rules in the “Final Rule” stage (this also includes “Interim Final Rule” and “Final Action” designations) in Unified Agendas from spring 2005 to present: 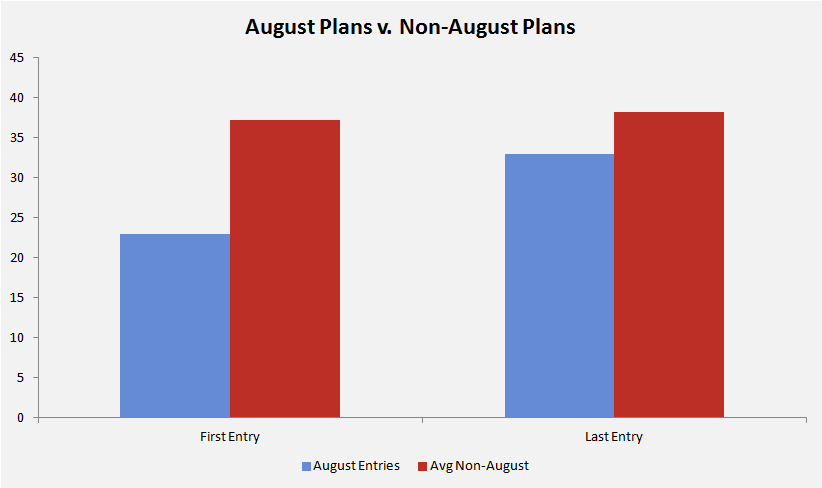 There are two sets of data because many rules, for various reasons, tend to have entries in multiple Unified Agendas. This examination looks at the first time an agency plans on finalizing a rule and the last time it plans to do so. The former serves as a sort of primary, preliminary plan whereas the latter is generally a more accurate prediction.

Neither instance has August as a month when regulators plan to finalize more rules than in other months. However, it is worth noting the relative increase in that dynamic from the more speculative “First Entry” to the more definitive “Last Entry.” Perhaps as agencies get closer to finalizing a rule they are able to more readily zero in on a certain timeframe. Or perhaps it’s a coincidence outside of agency control. In a way, the absence of a clear uptick in planning for August makes the previous data on actual publication trends more intriguing because it suggests that there shouldn’t be the uptick in activity that the data represented.

Congress has traditionally left D.C. in August to avoid the area’s often oppressive summer heat and humidity. Yet, the work of government continues with executive and independent agencies promulgating new rules. Recent overall trends suggest that regulators actually do take the legislative branch’s summer absence as a time to issue major rules. Although there does not appear to be an easily ascertained reason why regulators in recent years have increased their volume in August, it does highlight the importance of consistent review and oversight of the regulatory state.