It is no secret that we are in the midst of a sluggish recovery. Some have even dubbed it the worst on record; one largely characterized by weak job growth, nonexistent wage growth, and an average GDP growth of only 2.1 percent. It has also not been easy on the average American. A Pew Research poll from last year found that 26 percent of those surveyed felt the economy was not recovering at all. So, more than six years after the depths of the Great Recession, how does our recovery stack up against the rest?

Since World War II, the United States has experienced 11 economic recessions and recoveries as defined by the National Bureau of Economic Analysis. The chart below examines GDP growth, concentrating on the last 3 years of each recession and six years after the start of each recovery. All values were transformed into real, 2009 dollars and indexed to the worst (trough) quarter of that recession. That way, each recovery starts from an index of 100.

The American Action Forum (AAF) averaged GDP growth indexes for each Post-World War II recession and recovery excluding the Great Recession. When the current recovery is compared to this average, it is clearly substandard. Twenty-five quarters into this recovery, real GDP growth totals 14.2 percent. The average recovery, however, brought 25.5 percent growth during the same period of time. 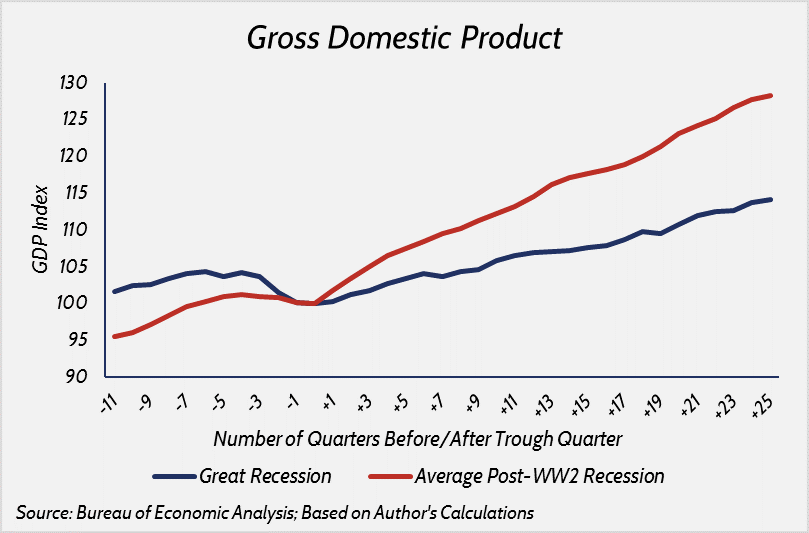 Consumer Spending is another popular way to gauge economic conditions. When personal consumption expenditures are similarly indexed to the worst quarter of each recession (below), our shoddy recovery is even more apparent. The current recovery has only produced a 14.9 percent increase in consumption, compared to an average consumption increase of 25.1 percent. 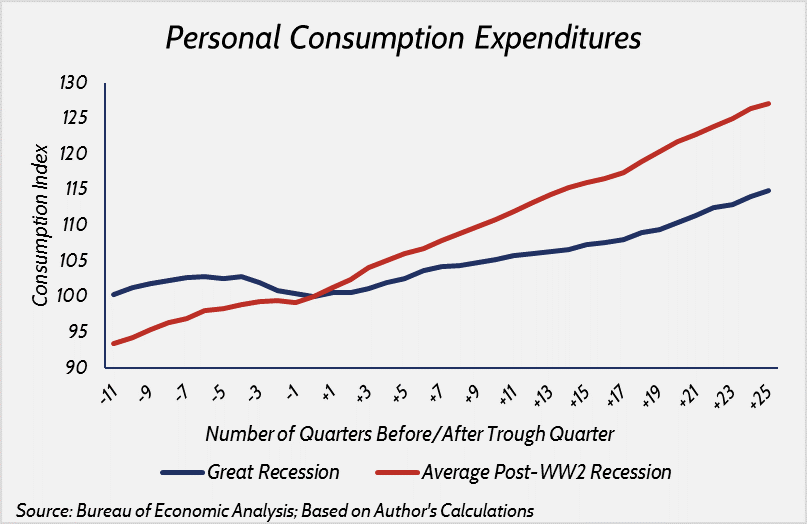 Another prevalent question is how women have fared since the Great Recession. The administration has been touting its achievements on this front, citing job creation and dropping unemployment numbers for women. Others argue that job losses from the recession have primarily occurred in fields that are disproportionally made up of women. Which is it? 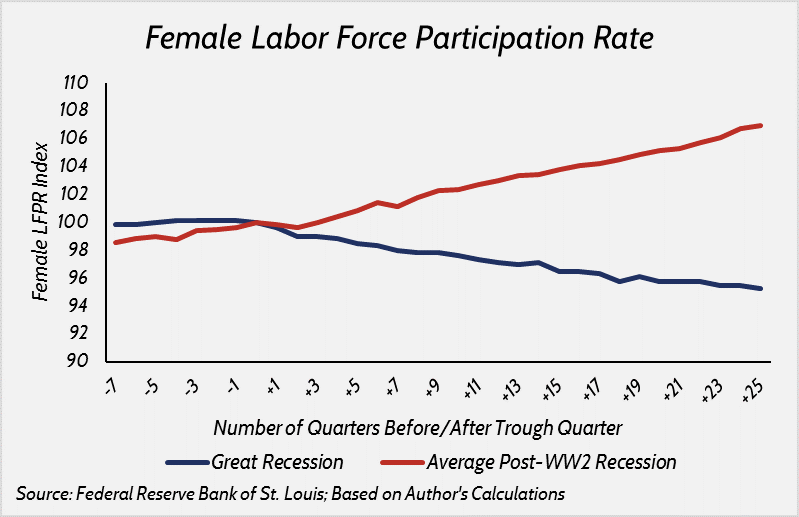 The above chart shows how women have been particularly harmed by the sluggish recovery. Since 1948 (the earliest that data is available), the female labor participation rate has been steadily rising. It was not until the early 2000’s that it started to level off, and until 2009 that the share of women in the labor force began to drop. It should be no surprise then that the “recovery” for female workers after the Great Recession has been dismal: the percentage of women in the labor force has decreased by 2.8 points since 2009, compared to an average increase of 3.1 percentage points after all other recessions. 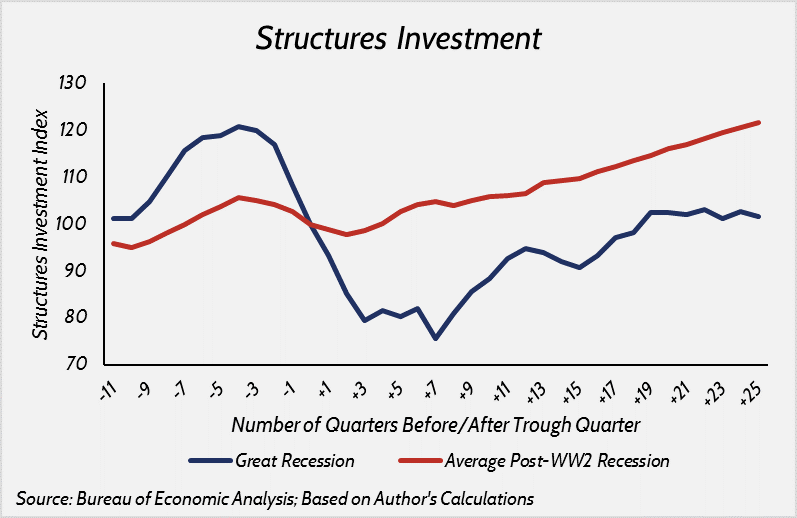 Investment in equipment used by businesses (below) also took a damaging hit after the recession, dropping by almost 30 percent from early 2008 to mid-2009. However, it rebounded strongly: since the trough of the great recession, equipment investment has grown by 67.9 percent. This is significantly greater than other recent recoveries, during which structures investment only increased an average of 47 percent. Investment in equipment tends to be highly responsive to changing economic conditions, allowing for strong growth during in the last few years. 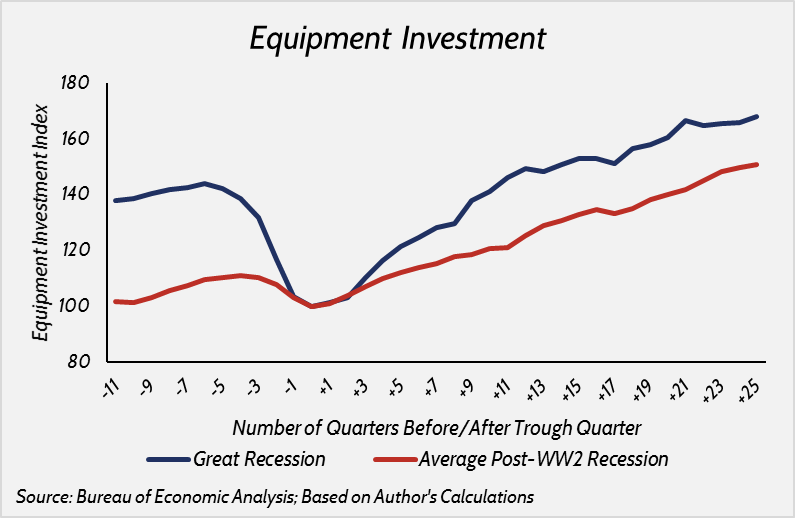 A third category of investment, intellectual property (IP), is shown below. This is an important field that can include expenditures on the production of new pharmacueticals, software, songs, literary works, or other innovative activities. When compared to the average recovery, recent investment in IP has undoudebtly lagged behind. IP investment at this point during the average recovery increased by 33.6 percent, while our recovery has only produced a 28.2 percent increase. 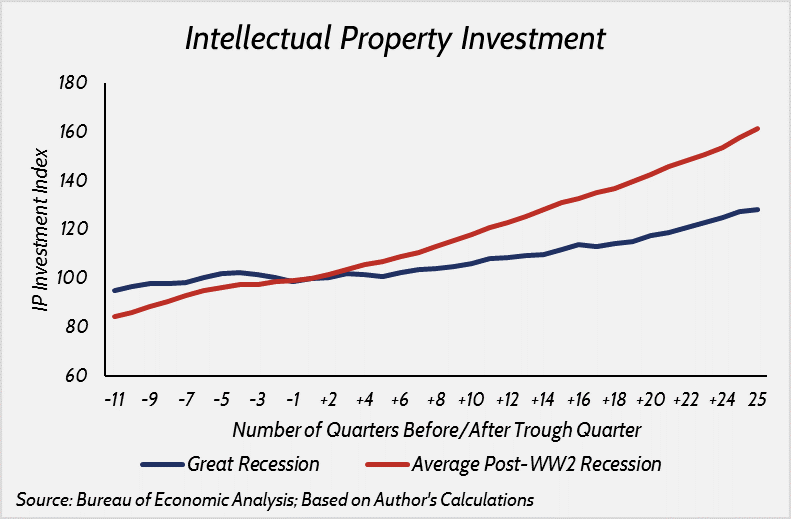 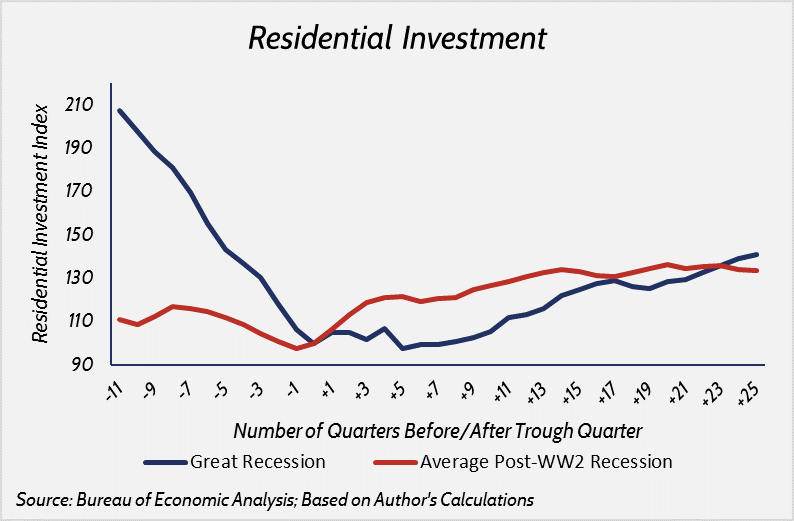 When compared to others in recent history, this recovery is lackluster at best. GDP has been slow to expand and the American workforce is still suffering. If these charts can teach us anything, it is that our first priority must be growth.