In 2011, Congress and the Administration mandated that the Pentagon cut almost $1 trillion from the defense budget over ten years. The devastating effects on U.S. national security did not take long to emerge. Senior military leaders recently testified before Congress that budget cuts have already severely damaged military readiness, modernization, and morale—and put American lives at risk.

As Congress debates the budget for the coming year, including funding for the military, it is important to understand recent and historical trends in defense spending, the broader domestic budget context, and the global security situation.

U.S. defense spending has declined dramatically over the past sixty years, both as a percentage of federal spending and a percentage of national income. As a share of the overall budget, defense has dropped from about 60 percent of spending in the 1950s to just 16 percent of spending today. As a share of Gross Domestic Product (GDP), defense spending has fallen from around 10 percent in the 1950s to 3.5 percent today.[1]

In 2011, two sets of budget caps were put in place that cut nearly $1 trillion from the defense budget over 10 years. The 2011 Budget Control Act (BCA) cut Defense Department spending by $487 billion over a 10-year period. Sequestration, which resulted as a failure of Congress to reach a deal on reducing the deficit, implemented an additional $55 billion in cuts to the defense budget each year for nine consecutive years, totaling $495 billion. In all, the BCA and sequestration caps cut $982 billion from the defense budget over 10 years. Military leaders have said these cuts are undermining the capacity and capabilities of the armed services.

Sequestration mandated a total of $1.2 trillion in budget cuts, to be split evenly between domestic and defense spending. This means that defense spending, despite accounting for only 16 percent of the budget, sustained 50 percent of the cuts. Essentially spared from sequestration was mandatory domestic spending, which includes Medicare, Medicaid, the Affordable Care Act, and Social Security—despite the fact that historical budget data show that it is the growth in entitlement spending that is driving the federal deficit and the national debt.[2]

In an increasingly dangerous world, a strong American military is necessary to safeguard U.S. national security. With threats on the rise in every corner of the globe, American leadership is imperative and the military must prepare for a variety of future contingencies. In this context, it is understandable that America spends more on the military than any other country. The second and third highest military spenders are China and Russia. While these countries do not accurately report their own defense spending, reliable independent estimates show that the Chinese and Russian military budgets are growing rapidly. Chinese military spending has increased by $188 billion over the past 10 years, an increase of 170 percent. In Russia, the defense budget is up $88 billion, or 108 percent, in the past 10 years.[3]

Where Should the Defense Budget Go from Here?

Congress is currently debating the Fiscal Year 2016 (FY16) budget resolution and the appropriate level of funding for defense. The defense budget has been static in recent years.[4] If the budget resolution adheres to sequestration-level defense caps, the base budget for the Pentagon in FY16 will be $499 billion. The President’s FY16 budget requested $534 for base Pentagon spending—a level of funding that still represents significant cutbacks to end strength and shortcomings in readiness. The 2011 BCA level of funding without the sequestration cap would allow for around $550 billion in base Pentagon funding. All of these numbers represent a budget-based approach, which asks how much we should we spend to defend the nation. The last time a strategy-based assessment asked the right question—how much it costs to defend the nation—was then-Secretary Gates’ 2012 budget, which projected FY16 Pentagon spending at $611 billion.

The U.S. Constitution clearly defines providing for the common defense as a responsibility of the federal government. A strong American military is vital to ensuring national security, but it must be properly prepared, trained, and equipped in order to do so. Congress should do its part to provide for the common defense by fully funding the military in the coming years and reinvesting to rebuild the capacity and capabilities that have been lost, and will continue to be degraded, as a result of sequestration. 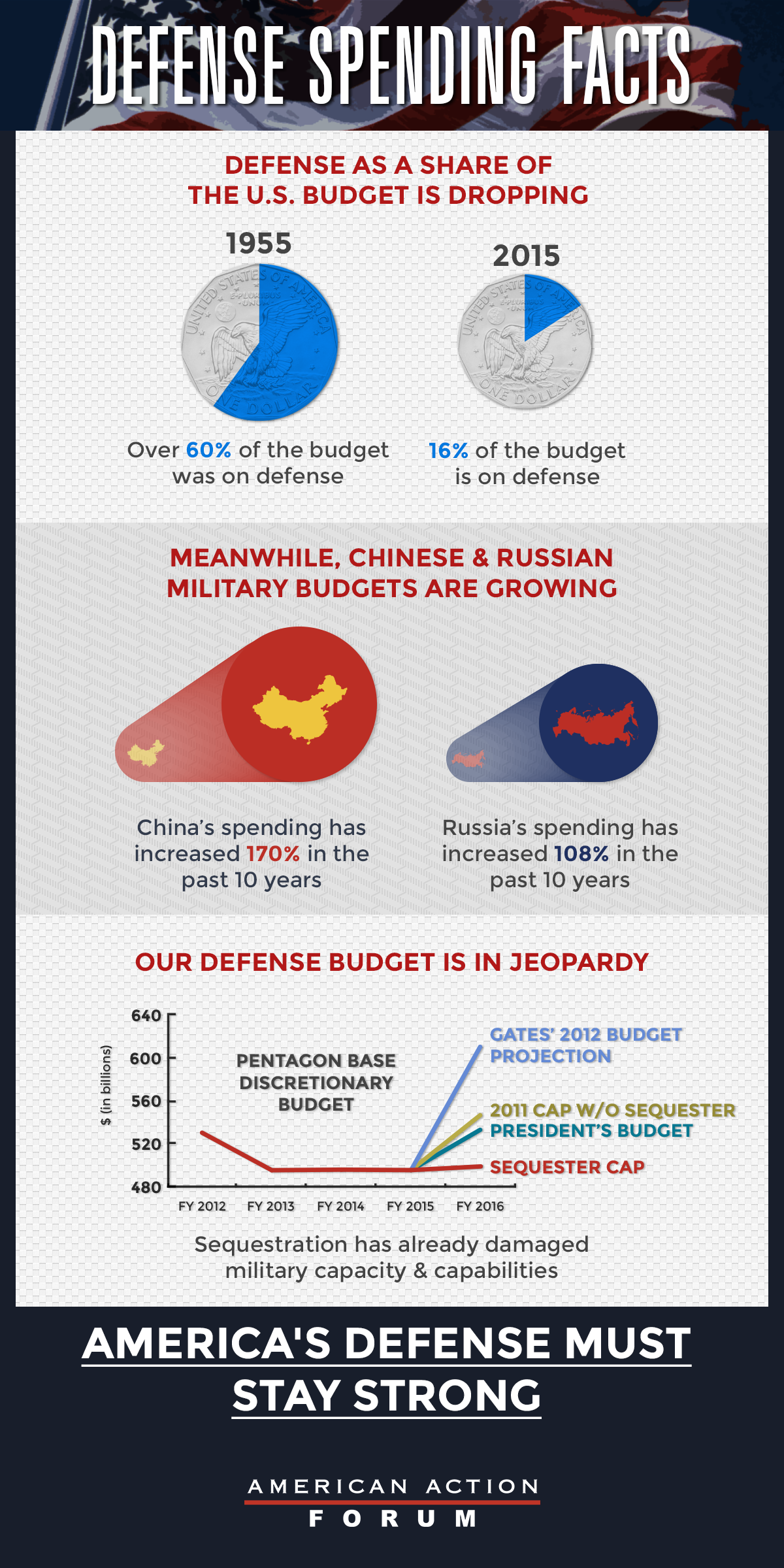 [1] Office of Management and Budget, http://www.whitehouse.gov/sites/default/files/omb/budget/fy2015/assets/hist06z1.xls