On April 1st, a technical provision of Medicare payment policy, referred to as the Sustainable Growth Rate (SGR), will result in a payment reduction to physicians of more than 20 percent.[1] Such a dramatic pay cut would have serious implications for doctors’ ability to accept Medicare patients and likely jeopardize senior’s access to care. This is why Congress is working to avoid the reduction as they have done for the last 13 years. The payment formula, originally designed to control Medicare expenditures on physician services, has become so routinely avoided that it can be difficult to remember how or why the medical profession often finds itself on this precarious cliff.

Medicare sets the fee schedule for physicians through a payment formula developed in 1988 by a team of Harvard researchers based on a relative value of physician work, a geographic modifier, and a monetary conversion factor that translates the formula into dollars.[2] The monetary conversion factor is a powerful and controversial policy tool that allows lawmakers to easily raise or lower the rates at which Medicare pays physicians. In 1997, Congress decided to put the conversion factor in the hands of the SGR algorithm. Contrary to popular belief, the SGR does not directly decide the annual adjustment to the conversion factor; rather, it sets a growth rate for target Medicare expenditures based on changes in enrollment, economic growth, and a measure of provider efficiency. Each year, a formula predicts whether actual spending will or will not exceed the SGR target, and adjusts the conversion factor accordingly. The SGR predicts both annual and cumulative spending targets to account for both annual fluctuations and long term spending goals.

The expanding economy of the late nineties led to bullish SGR targets. The lofty spending goals were easily achieved, and the SGR afforded moderate increases in physician payments. But when the economy turned in 2001, the SGR targets demanded that Medicare spending growth slow down as well. The formula was allowed to cut the monetary conversion factor by up to 4.4 percent annually, delivering an untimely pay cut to physicians in the midst of the first recession in more than a decade. This was an unfortunate first test for the payment formula. Congress learned from the incredibly unpopular cut and began a now time-honored practice of acting to prevent any payment reductions mandated by the SGR and finding budgetary savings elsewhere. 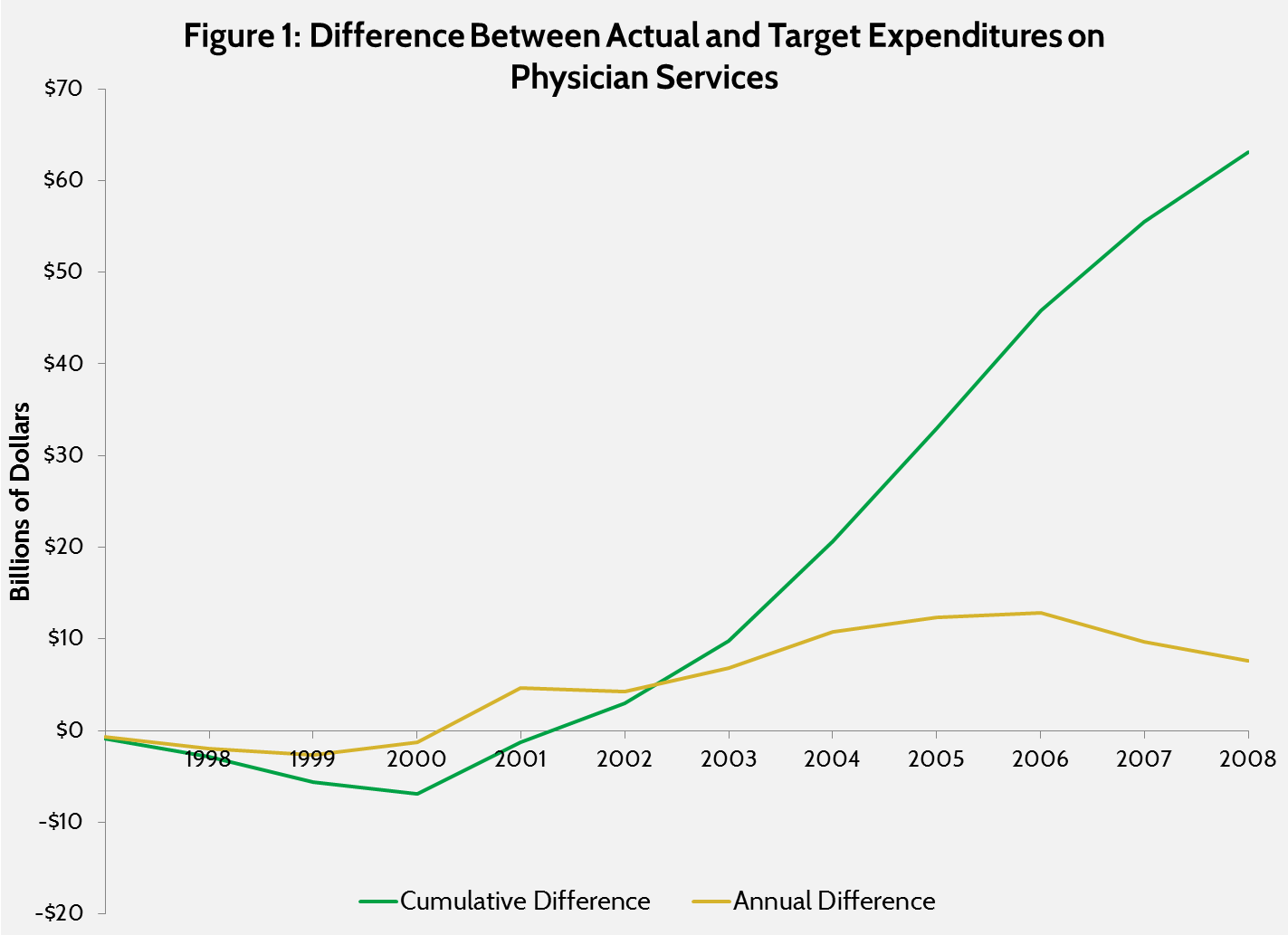 In the years following 2001, Congress continually replaced SGR cuts with moderate payment increases, expanding the gap between the SGR target expenditures and actual expenditures. Between 2001 and 2006, the annual target for expenditures set by SGR grew by 5.6 percent and actual expenditures grew by 7.1 percent. As the gap expanded—shown in Figure 1—the SGR demanded further cuts, which Congress felt even more pressure to avoid.[3] However, the architects of the formula anticipated that large cuts would be politically unpalatable and placed a cap on the size of the cut to the conversion factor. As a result, the SGR formula only called for cuts of between 3 and 5 percent. While any cut seemed to be out of the question, the prospect was not catastrophic and budgetary offsets were well within reach.

In 2006, Congress passed the Tax Relief and Health Care Act (TRHCA), which held constant the 2006 Medicare payment levels for 2007 but also, for the first time, promised to lower payment rates in 2008 as though the mandated cuts had taken effect.[4] In doing so, Congress created a sort of alternate reality—referred to by the Center for Medicare and Medicaid Services as “pre-legislation”—in which the conversion factor tumbles rapidly each year according to the SGR formula. As expected, actual spending continued to increase relative to the SGR targets, which exacerbated the hypothetical cuts. Figure 2 demonstrates the bifurcation in the actual and pre-legislation conversion factor that began with the TRHCA.[5] 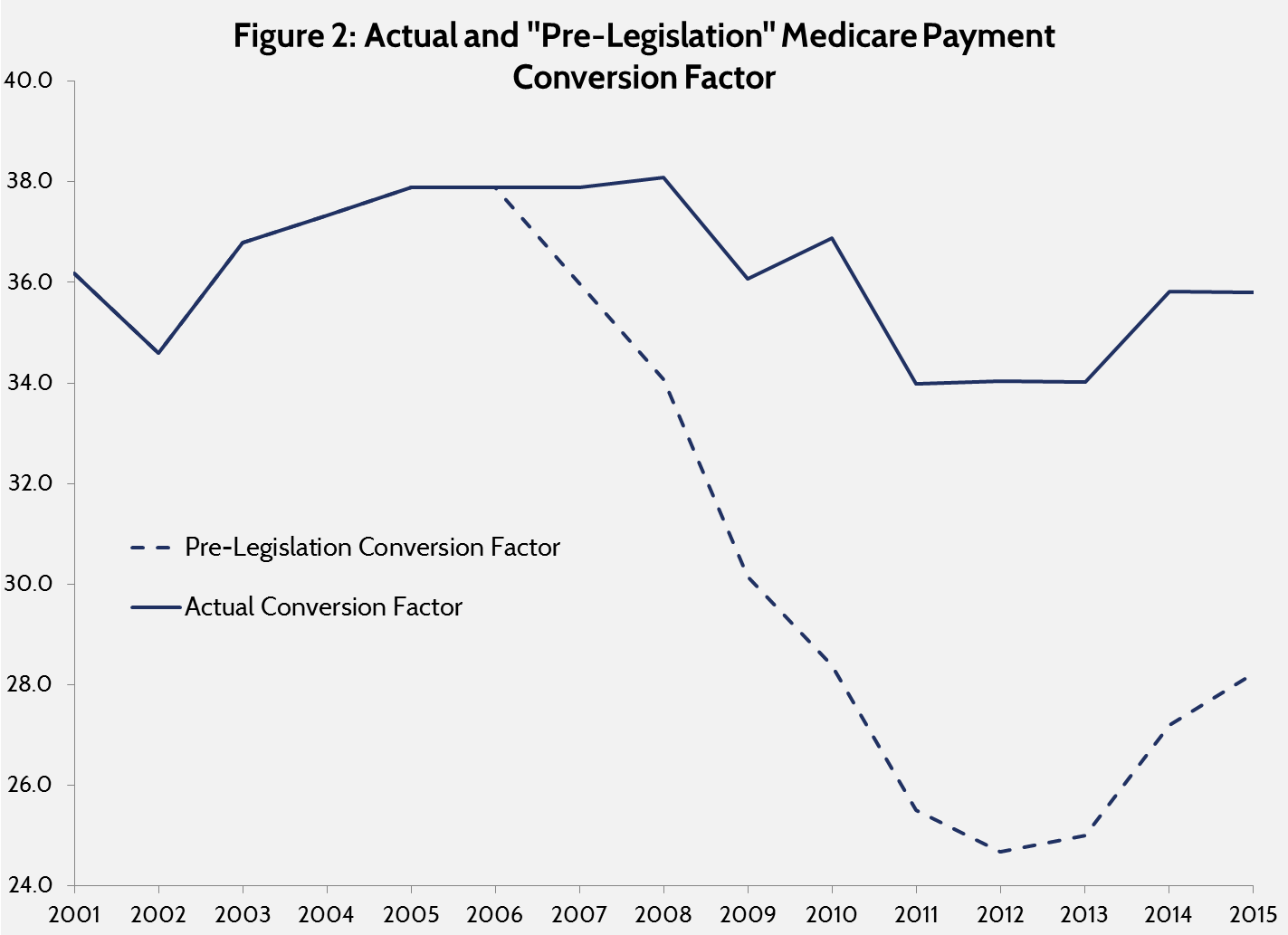 Since the SGR had been budgetary fiction for several years prior to TRHCA, this new distinction may seem like semantics, but it is crucial to understanding how the payment formula mutated from a functional, albeit ill-advised policy into an unreasonable threat. In 2008, the law required that Medicare reduce payment rates by the 5.3 percent and also by the 5.0 percent reduction that was ignored in 2007, totaling to a 10.1 percent pay cut. As shown in Figure 3, the cuts compounded from the typical 3 to 5 percent to more than 25 percent by 2012.[6] 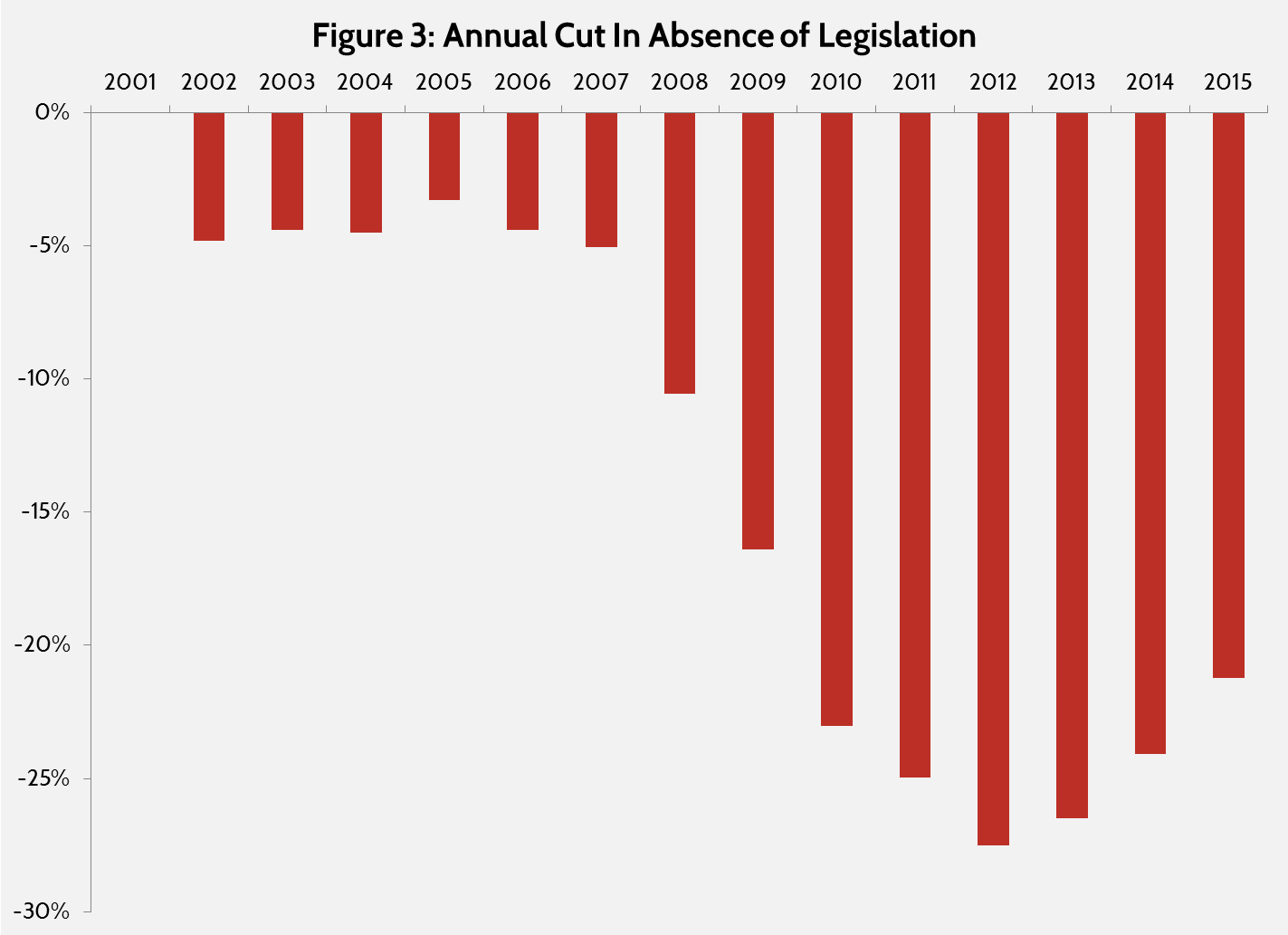 This fantasy, pre-legislation world should not be interpreted as the fiscally responsible Medicare payment rate. Because TRHCA severed the connection between the conversion factor mandated by law and actual Medicare spending, the pre-legislation conversion factor tumbled to all-time lows. By 2012, the fantasy payment rate was 33 percent below 1998 levels and 21 percent below 1993 levels.[7] And despite an 11 percent reduction in the actual monetary conversion factor between 2008 and 2011, the formula still calls for annual cuts that exceed 20 percent. The SGR is no longer meaningfully related to any realistic fiscal policy.

Reform and the Future of Physician Payment

One of the great ironies of the SGR debacle is that annual Medicare spending has been below the SGR targets since 2010 and cumulative spending reached the target set by the SGR in 2014. Despite ignoring the mandated cuts, Congress repaired many of the formula’s flaws. After the 2001 recession, Congress amended the SGR targets to be set with a ten year average of GDP growth, rather than more variable annual GDP growth. And beginning with 2009 targets, Congress removed increasingly expensive drugs administered by physicians from target expenditures, as have little control over the price of these drugs. Through a combination of physician payment reforms, unusually slow spending growth in Medicare, and improved SGR targets, Congress has set reasonable fiscal goals and achieved them—as shown in Figure 4.[8] 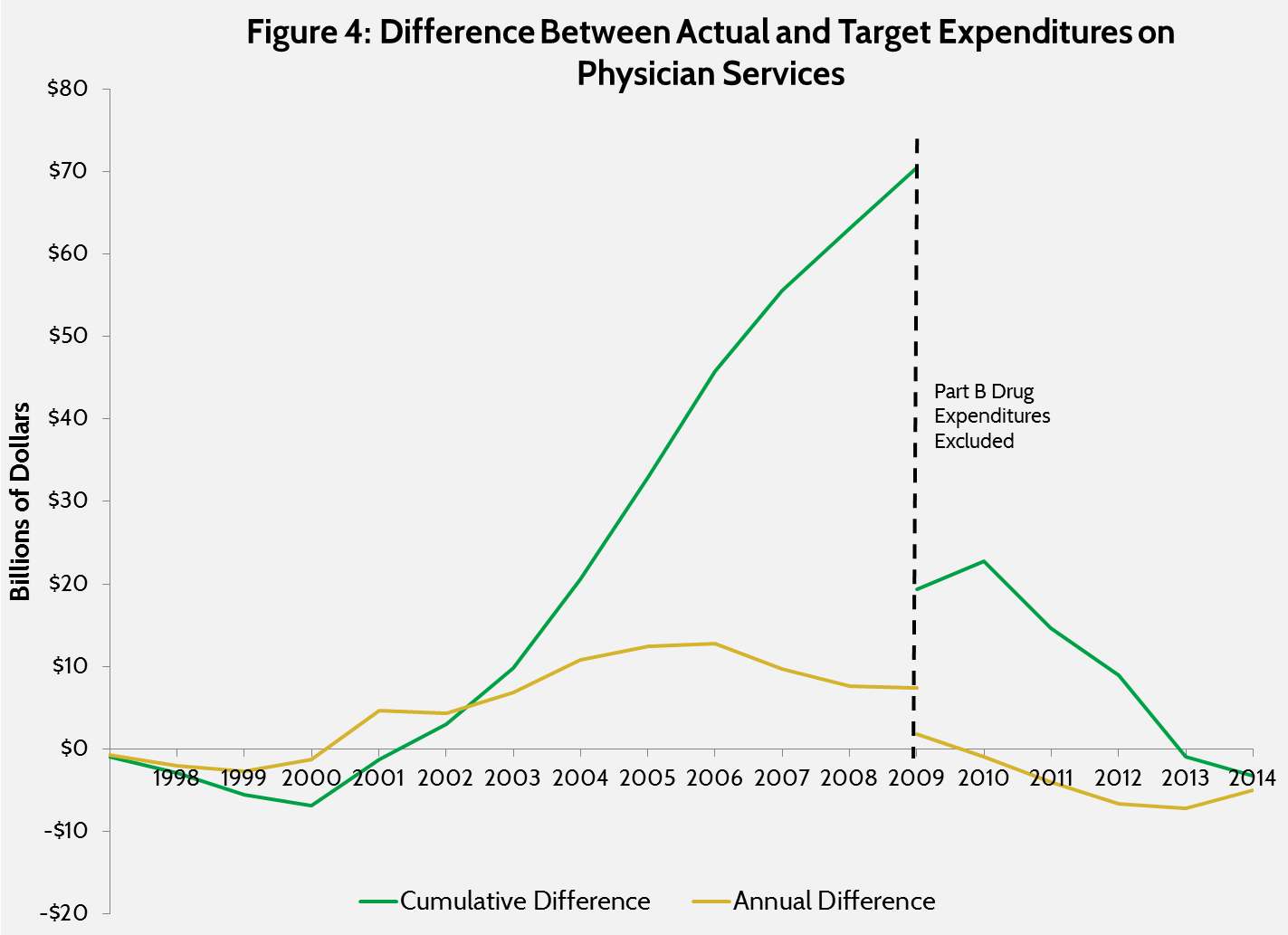 Unfortunately, the SGR is no longer salvageable. The only purpose it now serves is to bring Congress to the table in order to find budgetary offsets that will keep the beast at bay for another year—a practice that has totaled $165 billion worth of budgetary savings.[9] But this practice of scraping the barrel for bipartisan savings can result in poor policy. A better solution would be to permanently fix the payment formula, and create a sustainable physician payment structure that finds long-term, actionable savings in the Medicare program.

[1] “Estimated Sustainable Growth Rate and Conversion Factor, for Medicare Payments to Physicians in 2015,” Center for Medicare and Medicaid Services, 2015, available at: https://www.cms.gov/Medicare/Medicare-Fee-for-Service-Payment/SustainableGRatesConFact/Downloads/SGR2015f.pdf

[3] Data for Figure 1 and growth estimates for target and actual expenditures come from “Estimated Sustainable Growth Rate and Conversion Factor, for Medicare Payments to Physicians in 2008,” Center for Medicare and Medicaid Services, 2008, available at: https://www.cms.gov/Medicare/Medicare-Fee-for-Service-Payment/SustainableGRatesConFact/Downloads/sgr2008f.pdf

[5] Data for Figure 2 come from previously cited CMS reports and the Federal Regulation Notices on the physician fee schedule, available at: http://www.cms.gov/Medicare/Medicare-Fee-for-Service-Payment/PhysicianFeeSched/PFS-Federal-Regulation-Notices.html

[9] “What the Wall Street Journal Gets Wrong on the SGR,” Committee for a Responsible Federal Budget, March 16, 2015, available at: http://crfb.org/blogs/what-wall-street-journal-gets-wrong-sgr

The COVID-19 pandemic and its fallout created a worldwide shortage of semiconductors, which placed a significant strain on the U.S. economy, and the automotive…