As Tax Day approaches, approximately 150 million Americans will have to undergo the thankless task of complying with the nation’s broken tax code. The data on the cost and the time it takes the average taxpayer to comply with Internal Revenue Service (IRS) forms are truly staggering.

IRS Paperwork by the Numbers

The data above are taken from the Office of Information and Regulatory Affair’s (OIRA) “Information Collection Review” of IRS paperwork collections and associated costs. To put IRS’s 7.3 billion hours in perspective, it would take 3.67 million Americans (more than the population of Chicago) working 2,000 hours annually to complete these requirements.

Beyond the time burden, IRS reports that tax compliance costs $33.7 billion annually, stemming almost entirely from the individual income tax ($33.6 billion). IRS monetizes the hourly compliance for just a few of its 793 recording and recordkeeping requirements. However, the American Action Forum (AAF) went a step further, applying the average hourly cost of a civilian employee ($31.57), as reported by the Bureau of Labor Statistics, to the paperwork hours that IRS failed to monetize.[1] Monetizing all of IRS’s paperwork, total compliance costs balloon to $181.9 billion, five times what IRS reports for compliance costs.

The individual income tax generates 200 forms, or 23 percent of the overall total. There are two requirements tied for second. The Estate and Generation-Skipping Transfer Tax produces 23 forms that Americans must navigate every April. In addition, the Estate Tax imposes two million compliance hours annually. The other notable collection, tax returns for 501(c), 527, and 4947(a)(1) organizations, imposes 23 forms and more than 24.9 million hours of paperwork per year. The “Form 990” comprises the vast majority of reporting for non-profits. Broadly for IRS, producing 860 forms might seem like a steep burden, but Health and Human Services’ approximately 4,100 forms hold the title, even though Treasury imposes more paperwork hours.

IRS has a top-heavy paperwork burden, with the five largest requirements consuming more than two-thirds (5.2 billion hours) of the agency’s total.

The top-heavy paperwork also extends to compliance costs. These five requirements impose more than $114.3 billion in costs (assuming the civilian employee rate of $31.57 per hour) or 62.8 percent of all IRS’s reporting and recordkeeping burdens.

For taxpayers struggling to make sense of the current burden, it could actually grow far larger. Currently, the agency is reviewing the “Business Tax Income Return,” which imposes 362 million hours of paperwork. However, IRS has requested an increase to more than 2.8 billion hours, a proposed increase of 2.4 billion hours. Likewise, the agency is also considering an increase in time spent on the “Form 990-EZ,” from 43 million hours to more than 52 million hours. Regardless of the final calculations, it’s clear that tax compliance is going to remain a thicket of forms, tax preparation costs, and needless lost time for the foreseeable future. 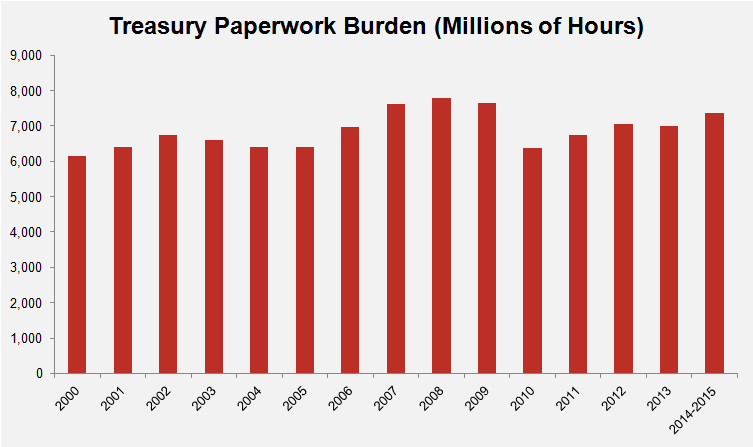 When discussing paperwork burdens, no other agency can rival the Department of Treasury. As the graph below reveals, Treasury imposes the vast majority of the federal government’s paperwork burden. 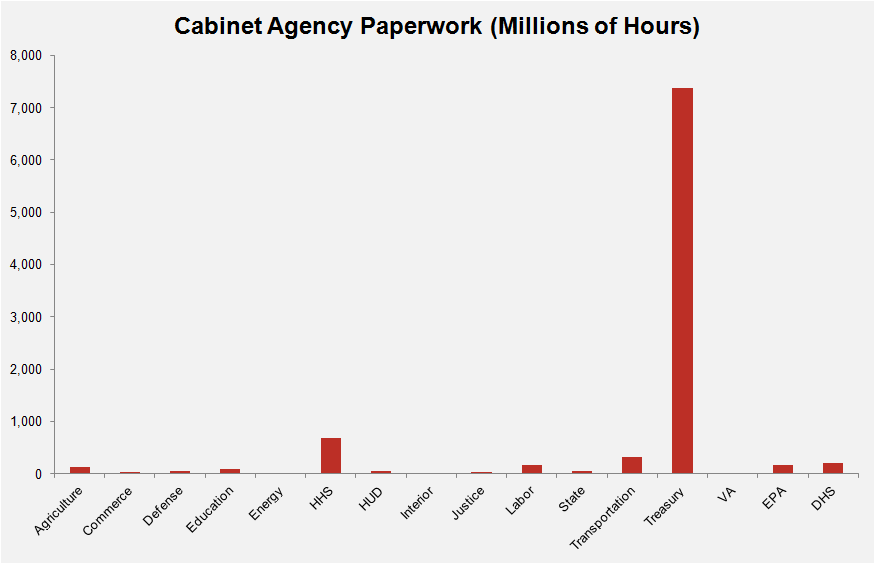 As noted by the Taxpayer Advocate Service (TAS), many entities have attempted to estimate the total cost of tax compliance and experts have embraced a range of methodologies.[2] The TAS, for example, estimated the cost of income tax compliance in 2010 at $168 billion. Inclusion of additional cost considerations and alternative approaches to monetizing hours spent in compliance alter these estimates considerably. For example, applying just the federal minimum wage ($7.25 per hour) to the hours that IRS did not monetize would reduce the total cost estimate made in this paper to $52.9 billion. Fichtner and Feldman recently completed a thorough assessment of the costs that the U.S. tax code extracts from the economy through complexity and inefficiency, beyond TAS’s estimate. According to the authors, in addition to time and money expended in compliance, foregone economic growth, and lobbying expenditures amount to hidden costs estimated to range from $215 billion to $987 billion. [3]

Other measurements beyond mere time and pecuniary estimates reflect an increasingly burdensome tax code. According to the TAS, tax compliance is so onerous for individual taxpayers, 94 of individual taxpayers used a preparer or tax software to prepare their returns.[4] The tax code has become so onerous that the IRS struggles to administer it. According to the TAS, the IRS’s ability to answer taxpayer telephone calls and the IRS’s ability to respond to taxpayer correspondence offer key metrics for taxpayer service. According to the TAS, the IRS received over 100 million calls in fiscal year 2014. In 2014, the IRS was only able to answer 64 percent of calls received, compared to 87 percent in 2004. The IRS failed to respond in a timely manner to 50 percent of taxpayer letters received in 2012, compared to 12 percent in 2004. This worsening response rate comes despite the increasing use of preparers and software by individual taxpayers.

No one, regardless of political affiliation, is satisfied with the current tax code. The Taxpayer Advocate Service (TAS), the watchdog office within the IRS, has often cited complexity as the single most serious problem with the tax code.[5] Sadly, with 7.3 billion hours of paperwork and $181 billion in wasted costs on simply complying with the law, this regulatory morass will persist until policymakers find a way to broker a truce on complexity and save taxpayers.