Typically, whenever an agency issues a major rule, they tout how the benefits greatly exceed the costs. However, agencies are far more reticent about promoting regulations that actually do more harm to the economy than good. The American Action Forum (AAF) found 28 rulemakings from 2006 to present when regulators admitted that costs would exceed benefits. The net costs of these measures will impose $6.4 billion in burdens.

In 2011, President Obama signed Executive Order 13,563, which set forth his vision for regulation, including retrospective reviews of existing rules and how regulators should prioritize rulemakings. One clause is telling: “each agency must, among other things: (1) propose or adopt a regulation only upon a reasoned determination that its benefits justify its costs.” One would think that would end the conversation over whether regulators should continually issue regulations with more burdens than benefits.

In September, the president issued remarks at the Business Roundtable, a trade association in Washington, D.C. In response to a question about lowering ground-level ozone (smog), President Obama stated, “But I think what you’ll see in the analysis overall is – we don’t issue a regulation where the costs are not lower than the benefits.” When the Supreme Court vacated a major EPA rule earlier this year, the Court declared, “No regulation is ‘appropriate’ if it does significantly more harm than good.” Yet, there are at least 19 instances (28 in the entire sample) when the Obama Administration issued a rule with more costs to the economy than benefits.

There are actually thousands of rules where the listed costs of the regulation trump the listed benefits. This is not because a regulation might not have benefits to society, but because the agency never quantified or monetized the benefits. Agencies rarely quantify these figures. For example, in 2014, 55 rulemakings listed benefits, compared to 469 that monetized costs. Agencies do make a concerted effort, for legal, economic, and political reasons to ensure the stated benefits of a rule overwhelm the costs, sometimes by a factor of 4:1 or 5:1.

Yet, there are dozens of glaring examples when agencies fail to follow executive guidance. In one troubling instance, EPA issued a rule for biomass-based diesel fuel requirements. The agency noted food prices could escalate under the Renewable Fuels Standard by “$10 per person per year.” Not to mention, there were $381 million in higher fuel prices generated by the rulemaking. What are the benefits? Well, according to the Environmental Protection Agency, there are actually $52 million in environmental “disbenefits” from adoption of the measure, to the tune of $52 million. In the words of the actual text of the regulation: “Impacts on water quality, water use, wetlands, ecosystems and wildlife habitats are expected to be directionally negative.”

If consumers don’t benefit from the rule and the environment doesn’t prosper from an EPA measure, then who does? The soybean industry. According to Sofie Miller of the GW Regulatory Studies Center, the price of soybeans is expected to rise by 18 cents per bushel and soybean farmers can expect $550 million in additional revenues. In this instance, the benefits came nowhere close to “justifying” the costs.

The chart below illustrates the cumulative burden of net cost rules. 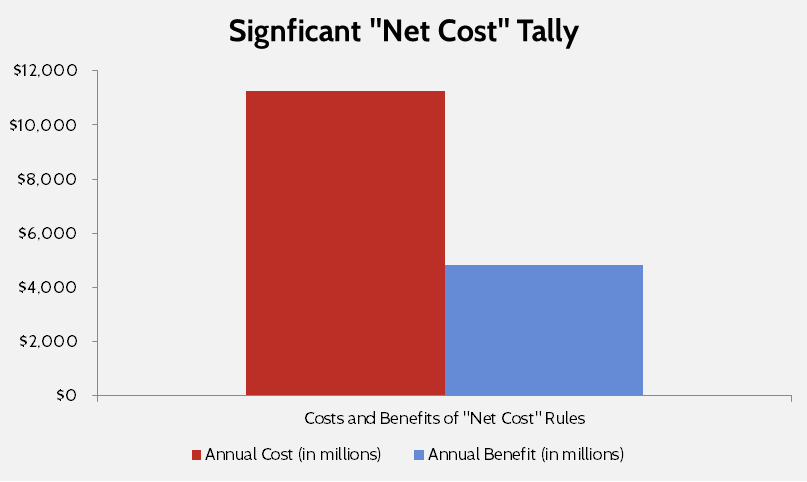 On an agency basis, the Department of Transportation (DOT) led the way with nine rules that impose net costs, compared to the next closest agency, Health and Human Services at seven. EPA had five measures, but combined, they could impose net costs of $4.2 billion annually. The seven DOT measures, could add just $747 million in net costs, so EPA’s impact is outsized, despite its third place status here.

For the sample as a whole, the cost-to-benefit ratio is 2.3 to 1. One EPA rule, however, had a particularly egregious ratio. In 2014, the agency finalized a rule for “Cooling Water Intake Structures.” Although the benefits of the rulemaking were difficult to monetize, EPA arrived at a figure of $29 million annually, certainly better than $52 million in “disbenefits.” However, the annual costs were $297 million and net present value burdens exceeded $7.3 billion. This is a cost-benefit ratio of 10.3:1.

Omitted from the figures above are the scores of financial regulations that impose tremendous costs, but admit limited-to-zero quantified benefits. These were omitted, because unlike the 28 rules mentioned above, these financial regulations never monetized the benefits of the regulation. Regulators can argue about Dodd-Frank rules that might improve the stability of the banking or housing sectors. However, as with most large pieces of legislation, there were provisions in Dodd-Frank that did nothing to rectify the conditions that led to the Great Recession.

For example, the Securities and Exchange Commission (SEC) recently finalized a rule mandating that corporations calculate all the benefits received by the CEO and compare them to the median worker in the corporation. This data already exists, and has for some time, but that didn’t stop lawmakers and regulators from adding this shaming statute into law. The “Pay Ratio” rule will impose $1.8 billion in total costs and add 2.3 million paperwork burden hours. The benefits? It “may provide an informational benefit to shareholders,” but SEC was “unable to quantify this benefit.” It is doubtful there is any government official who can convincingly argue that benefit tops $1.8 billion.

In another instance, also an SEC Dodd-Frank rule, for disclosing “Payments by Resource Extraction Issuers,” regulators were unable to quantify or monetize the “accountability” and “good governance” components of the regulation. SEC noted the vague benefits “cannot be readily quantified with any precision.” The costs were quantified: $1.4 billion and more than 300,000 paperwork hours. Even a federal court took notice, striking down the regulation.

Finally, buried in Dodd-Frank was another provision designed to ensure that companies disclosed whether their minerals originated from the Democratic Republic of the Congo. This had nothing to do with the financial crisis and has hardly promoted “peace and tranquility” in the Congo. World Bank data indicate no slowdown in the violence there. Yet, SEC promulgated the rule even though it was “unable to readily quantify with any precision” the benefits. The Commission was even more forthright: “[T]he social benefits are quite different from the economic or investor protection benefits that our rules ordinarily strive to achieve.” These amorphous benefits are somehow supposed to eclipse $609 million in annual costs and 2.2 million paperwork hours? Last year a court struck down this regulation as well.

Regulators are supposed to act in the public’s best interest, correcting market failures to ensure, on net, Americans are better off as a result of regulatory intervention. As this data reveal, too often regulators impose rules where the costs easily trump the benefits. These discrepancies are hardly trivial: $6.3 billion in net costs to the economy. For perspective, in FY 2013, the federal government imposed total costs of just $3 billion, according to the White House. Perhaps it’s time regulators follow the president’s own guidance and institute rules where the benefits actually justify the costs.

Severance Taxes Prove to be a Poor Choice

Executive Summary Many agencies and programs at all levels of government receive revenue from the royalty payments of private energy developers. …