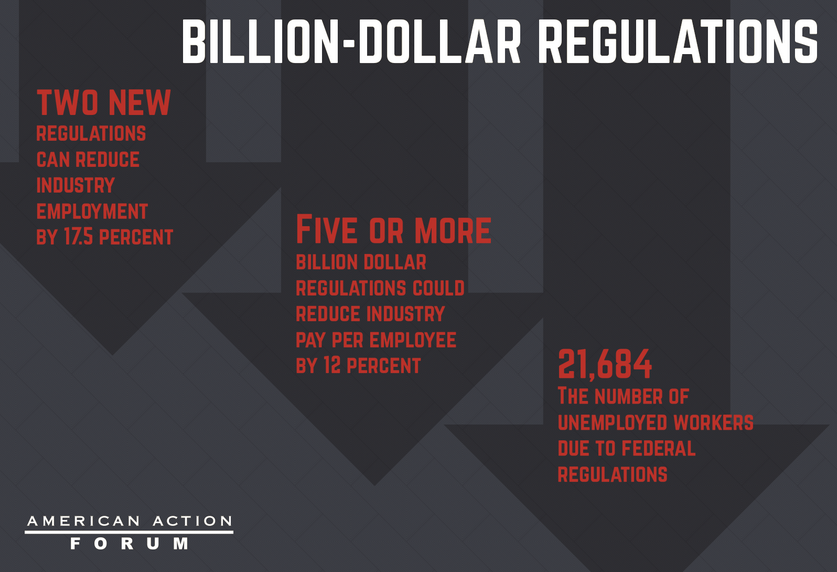 In the American Action Forum’s (AAF) previous study, “Cumulative Impact of Regulation and Employment,” we examined the employment impact of significant regulations that also affect small entities. In this study, AAF examined how the largest regulations ($1 billion or greater) affect employment. We found the cumulative impact of five or more billion-dollar regulations on an industry reduces employment by more than 54 percent. In addition, average pay for employees still working declines by more than 12 percent after five or more billion-dollar rules. These results are far more striking than our previous study, which found three significant regulations could reduce industry employment by approximately 20 percent. 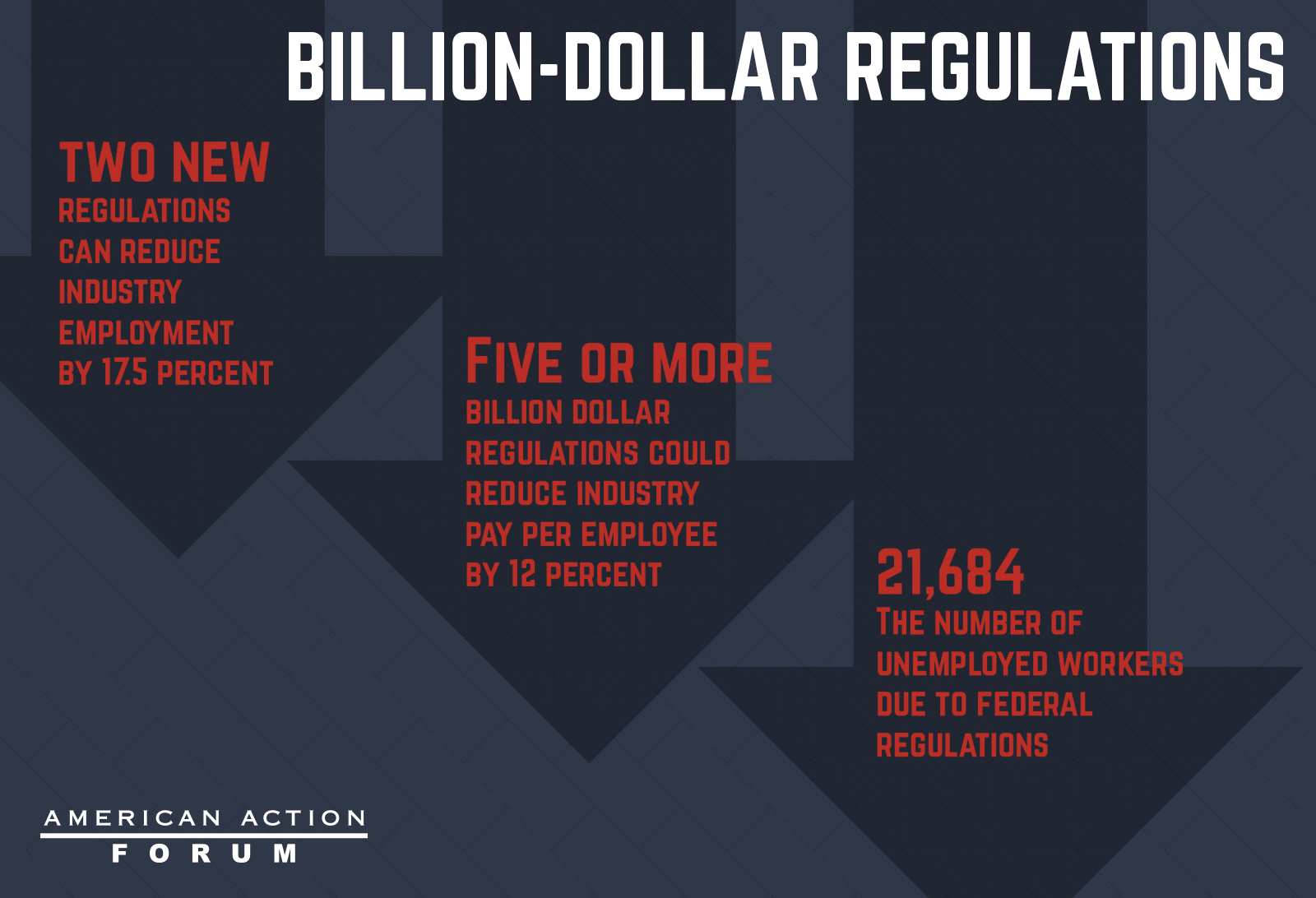 AAF replicated the methodology from its previous study. Instead of using “economically significant” rules that also affect small entities, however, we examined the most recent Office of Information and Regulatory Affairs Draft Report to Congress, which listed all 19 rules with an annual cost of $1 billion or greater. The following table presents these billion-dollar rules.

The above table represents 17 of the 19 billion-dollar rules implemented from 2003 to 2012. AAF excluded the “Clean Air Fine Particle Implementation Rule” and the 2008 Ozone Rule because of data collection issues. For example, we omitted the “Fine Particle” rule because it listed only state and local industries. In adhering to our previous methodology, AAF focused only on the effect of regulation on private-sector employment.

From these 17 regulations, the accompanying regulatory impact analyses listed the following 44 industries as most affected. This sample of industries represents 14.1 percent of total private-sector employment. They are presented below with their North American Industry Classification System (NAICS) codes for reference.

As in “Cumulative Impact of Regulation and Employment,” AAF employed industry-level data from the Bureau of Labor Statistics’ Current Employment Statistics and used average annual employment, average total annual payroll, and average pay per employee in the 44 industries listed for each year from 2002 to 2012. While the previous paper studied all the industries required to comply with the regulations (as listed in the regulatory text), AAF could not use an identical methodology in this study because there were cases where one regulation affected an industry and another regulation affected a specific subsector of that same industry. If we were to include both the industry and its subsector as separate observations, it would skew the analysis because we would essentially count the same industry multiple times.

AAF resolved this issue by consolidating the broader industry regulations into more granular subsectors. Specifically, AAF assumes that all rules that apply to broad industries (shorter NAICS codes) also apply to their subsectors (longer NAICS codes). Thus, for instances in which a broader industry and one of its subsectors were affected by separate regulations, AAF dropped the broader industry from the data set and added its regulation to the subsector. For example, the “Ejection Mitigation” regulation listed “Motor Vehicle Manufacturing” as an affected industry. During AAF’s consolidation, we dropped “Motor Vehicle Manufacturing” and applied this rule to automobile and light truck manufacturing, the more granular subsector.

To examine the cumulative effect of several billion-dollar regulations, this analysis estimates the change in industry employment, total industry payroll, and payroll per employee resulting from multiple significant new regulations. In particular, AAF performed a fixed effects regression to estimate the effect of an industry receiving one, two, three, four, or five or more new billion-dollar regulations on the log of employment, log of total payroll, and log of payroll per employee. To account for macroeconomic forces during the period, such as the loss in employment due to the Great Recession, AAF controlled for year. In addition, to account for changes in prices during that time, AAF controlled for industry chained Consumer Price Index (CPI).

Table 2 reveals that billion-dollar regulations are also cumulatively damaging to total industry payroll. In particular, relative to industries without new regulations, facing two, three, four, or five or more new regulations lowers an industry’s payroll by 19.7, 25.6, 62.2, and 67.1 percent respectively (all highly statistically significant). For perspective, the average industry in this sample spent $20.7 billion on its employees in 2012. If an industry faced five or more new large regulations in the following years, its total payroll would decline by $13.9 billion.

As employment declines in an industry, so does the amount of money that industry generally spends on its employees. Thus, AAF evaluated how regulations cumulatively affect the average pay per employee in an industry. We illustrate the results in Table 3.

Broader Trends in Regulation and Unemployment

As the intersection of regulation and employment becomes more transparent, public attention has turned to whether recent economic stagnation is the product of federal rules. The data here are not fully conclusive and attributing the broader economic malaise to regulation is more difficult.

The Worker Adjustment and Retraining Notification (WARN) Act provides some recent data on the cause of private-sector unemployment. WARN requires employers with more than 100 employees to provide public notice of mass layoffs at least 60 days in advance.

The Bureau of Labor Statistics has the listed reasons for mass layoffs from 1996 to present, but BLS only collected “Government Regulations/Intervention” starting in 2007, and those data are partial. In the first quarter of 2013, regulation forced 1,686 employment separations, or roughly 1 percent of the WARN sample. Regulation trumped “Business-Ownership Change” as a reason, but “Business Demand” (62,800) led all reasons. The following chart displays total WARN Act layoffs citing regulation since 2007. 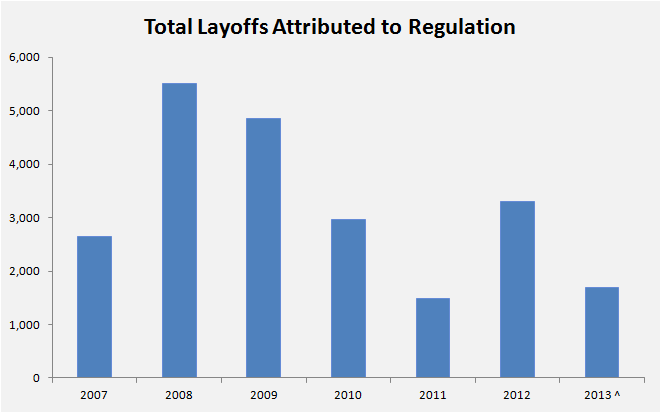 ^Data from only the first quarter

There have been 22,435 unemployed workers from mass layoffs attributed to regulation since 2007, with an annual average of 3,458. Given the current labor market, this might not appear significant. However, there are limits to relying on WARN Act notices as proxy for regulation and employment. WARN only applies to “large” employers, mass layoffs, and the data from 2013 are incomplete.

In addition, the data tell us nothing about the potential hires that never resulted because of government regulation. For example, there are at least two proposed power plants that companies never completed because of recent regulations. Combined, they would have employed more than 4,000 workers.

The hidden nature of regulatory costs can affect business demand in many ways. Regulatory impact analyses concede that new rules will increase the cost of consumer goods, drive up premiums, and occasionally raise energy prices. Taken together, this affects overall demand, but in ways that are difficult to measure. With more than 22,400 direct layoffs, it is clear that regulation plays a role in the labor market.

A 54 percent decline in industry employment after five or more billion-dollar regulations is certainly a striking headline figure. Clearly, this is a significant impact; some might say implausibly large. Further research may be required to hone more specific results, but these data point to an economically meaningful burden that diminishes employment.