In his 2015 State of the Union address, President Obama announced a $60 billion  initiative to provide students with two years of free community college. The program would require states to opt in and commit 25 percent of the necessary funding.  In return, the federal government would pick up the remaining 75 percent of funding for tuition and fees.

In this paper, the American Action Forum (AAF) examines the impact of “free college” proposals on states, finding:

Recent proposals to provide the first two years of community college to students for free have become popular. These proposals do not fully cover the cost of attendance, just tuition and fees. The proposals also rely on states to provide funding commitments and meet “maintenance of effort” conditions.  In addition, the proposals do nothing to actually lower the cost of college, but merely subsidize today’s expensive tuition rates. Free in this context does not attempt to drive down the cost of providing education, but instead shifts the burden of paying for higher education away from students and onto taxpayers.

The Cost of State (Lack of) Participation[1]

The president’s proposal is structured as a matched investment, including an additional commitment to making and sustaining appropriate funding increases. The annual cost of expected state investment varies substantially, from as low as $7.4 million in Vermont to more than $349 million in New York (see Chart 2). At a minimum, the incremental one-year additional cost for all states would be approximately $3.7 billion.[2] This does not take into account tuition increases nor does it address the potential for students not currently in the higher education market to enroll in community colleges or for students at 4-year institutions to shift to community colleges.  Under very simple assumptions[3] the collective annual cost to states could easily reach $4.1 billion.

Pairing these minimum additional commitments with existing annual state appropriations for higher education[iii] suggests that the average state would need to increase its annual appropriations by 5.1 percent to 5.7 percent to cover states’ shares of the proposal’s match requirement. Across individual states those percentages vary from as low as 2.1 percent in Montana to 12.4 percent in New Hampshire. 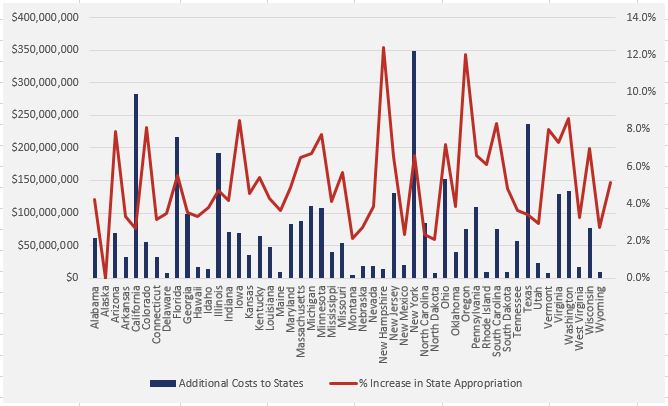 States must not only be fiscally capable of such investments but also be willing to participate in the program. While the program currently has yet-to-be-defined performance standards, these standards and the necessity of reporting on them will impose further regulatory costs and paperwork burdens. In either case the incentive grant structure means that different levels of state participation will impact the eligible college-going population differently. Just four states enroll one-third of all public college students (California, New York, Texas and Florida) and half of all public community college students come from just seven states. California alone enrolls approximately one out of every five community college students in the United States.

Given that states, not students, initially determine participation levels, they substantially determine which students are eligible. For one or more of the “Big Four” states above to either be unwilling or unable to meet the incentive grant requirements, the result would result in anywhere from 200,000 to 1.6 million students to be ineligible for the proposed public subsidy.

The ability to both inject and sustain additional resource commitments into public higher education will depend in part on individual states’ public priorities, notably health care and pensions commitments. Despite the last recession ending just five years ago and a number of states having experienced budget surpluses in recent years, declines in state higher education investment continues to persist. Between 2008 and 2015, 31 states cut per-student funding by more than 20 percent, and 6 states cut funding by more than one-third.[5]

Proposals for free college are expected to offset such declines by creating matching federal investments, however, it is unclear to what extent capacity for such investments exists. Up to 16 states are expected to run deficits in the next year or two years. In states with sizeable public higher education systems like Illinois, Maryland, Wisconsin and Pennsylvania, deficits are expected to run between $750 million and $6 billion.[6]

Chart 3 plots state 2- and 4-year enrollments against George Mason University’s Mercatus Center index of states’ fiscal health.[7] The bottom five states in particular are classified by the Center as being in “financial peril” based on high deficits and unfunded debt obligations. If one assumes that the bottom quintile was financially unable to meet the matching fund requirements, more than 1.6 million community college students in these states would find themselves ineligible for relief provided by the president’s proposal. 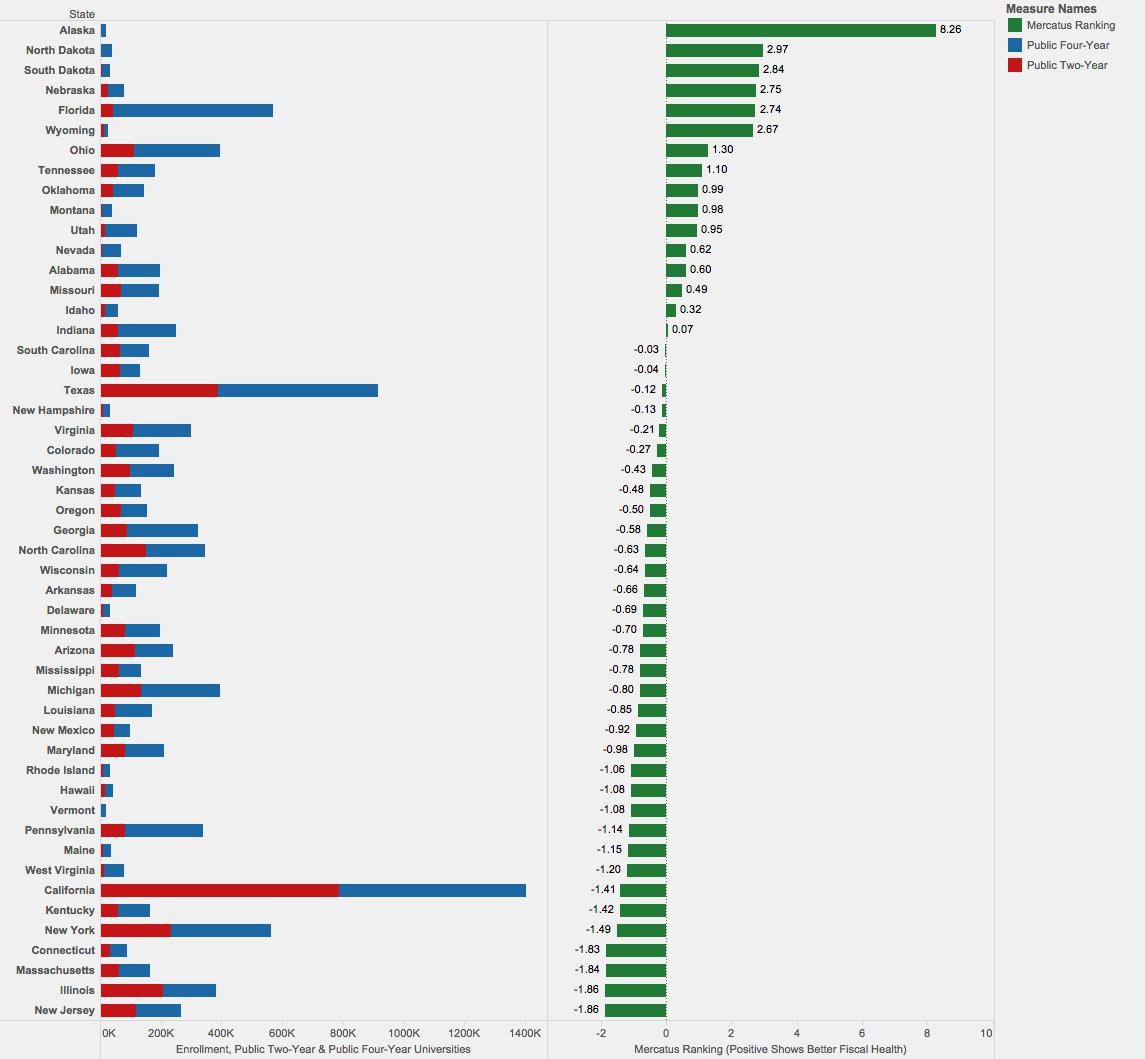 Note: Based on FTE fall enrollments.

State willingness to participate may also be affected by college graduates’ migration patterns. Unlike other infrastructure investments, such as highways, human capital does not have to remain within the state where it was created. As Figure 1 shows, hundreds of thousands of students with either some college or associates degrees annually move to different states.

Finally, evidence supporting the success of higher education programs of this type is thin and is more apt to suggest states generally struggle to meet federal eligibility conditions.

The U.S. Government Accountability Office published a report in December 2014 on state and federal programs to improve college affordability that was only able to identify three federal/state incentive-style programs. Of these, the one closest in structure to free college proposals, the College Access Challenge Grant Program, appropriated $142 million in 2013 (the last year of the program) but only ended up spending half of the money because not all of the states were able to meet the maintenance of effort conditions required for the funding.[8]

A simpler solution would be to investment additional funds into existing federal programs designed to foster affordability, such as the Pell grants. In comparison to Pell, state-based grants or allocations to institution types by design must curtail access since individuals do not dictate initial eligibility.

At the state level, the obvious obstacle is that states most capable of meeting the conditions necessary to receive matching federal funds will be those who are likely to need it the least. As seen in Figure 2, the financially healthiest states almost exclusively service small community college populations and states with high existing public subsidies at these schools. The states that need the dollars the most, the ones where economic investment can – over the long run – foster a larger, more stable revenue base, will find it most difficult to secure the investment dollars and maintain those levels over time.

In this regard, a state-based incentive grant is a policy that actually promotes gaps between the haves and the have-nots. If the federal government announced a program allowing families that agreed to make sustained investments in their children’s higher education to have the balance of their tuition and fees paid for, it would immediately be met with derision as a tool that assists the wealthy at the expense of the poor. Enacting similar policy at the state level is also biased toward some.[9]

The idea behind free community college is that states and institutions are supposed to make investments that will eventually lead to structural changes to higher education that students, families and policymakers all seek: lower-cost education programs and higher completion rates. Unfortunately, there is no evidence or logical support for the idea that free community college “bends the cost curve” or provides states making substantial financial commitments with assurance or incentives that completion rates will rise as a result.

While proposals to make community college free continue to attract attention, these proposals are expensive and fail to actually help students in need. Additionally, these proposals require states to make investments that they’ve shown a great deal of reluctance committing to while being offered no promise or guarantee of a return on the money spent.

A balanced policy discussion on these proposals must consider the costs and tradeoffs. Not every student would benefit from these proposals and not every state will be willing or able to participate. Where public resources are scarce, the fact that so many students start college but never finish raises important questions about whether existing funding could be more efficiently allocated to achieve more favorable outcomes. 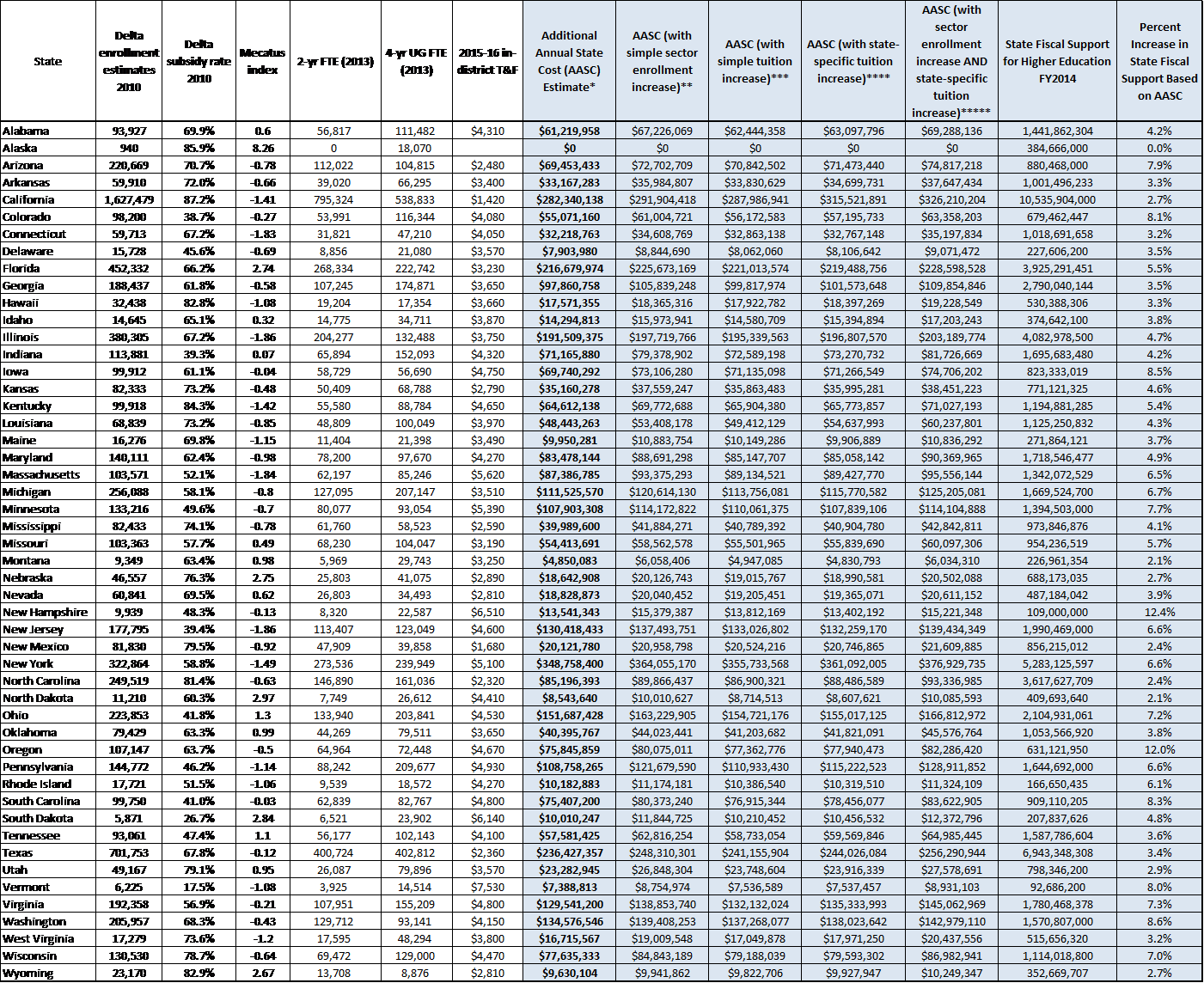 [1] A core challenge to developing reliable cost estimates is that, at any given time, the most recent state-, school- and student-based data typically captures a number of different years. The estimates provided here face the same constraint though the divergence only spans approximately three calendar years. Rather than normalize and report “old” data, we have opted to instead utilize the most recent data available for each data type on the assumption that incremental, year-on-year changes have not been so dramatic as to significantly alter the spirit or purpose of the estimates being provided.

[2] Cost estimates are based on the FTE enrollment levels and average tuition and fee data provided by the College Board’s Trends in College Pricing 2015. http://trends.collegeboard.org/sites/default/files/trends-college-pricing-web-final-508-2.pdf

[3] Assumes a two percent tuition and fee increase and an increase in a state’s community college population that equates to a 5 percent shift of a state’s existing public 4-year population.

[7] More information about the Mercatus rankings can be found here: http://mercatus.org/statefiscalrankings

[8] The other program that the GAO identified as part of their research was the Leveraging Educational Assistance Partnerships (LEAP) program. The report also mentions the GEAR UP program. However that program is designed more towards assisting a wider array of educational partners than just colleges or towards colleges’ abilities to reduce costs. Source: U.S. Government Accountability Office report, Higher Education: State Funding Trends and Policies on Affordability. http://www.gao.gov/assets/670/667557.pdf

[9] To get a better understanding of the challenges to state-based efforts at promoting university funding equality, look at the National Science Foundation’s Experimental Program to Stimulate Competitive Research (EPSCoR), which was designed to redress the concentration of federal research dollars in a relatively small number of universities at the expense of many flagship institutions in the central part of the United States. More information can be found here: http://www.nsf.gov/od/oia/programs/epscor/2030%20Report.pdf