How to Think about Modern Media Mergers

Recent proposed mergers in the broadband space have brought attention to the competitive implications of these business deals. Three broad observations should be kept in mind when evaluating broadband mergers and acquisitions:

•       Mergers and acquisitions can carry real gains for consumers by improving both the company and the dynamics of the relevant market;

•       The rapid development of the broadband industry demands a much higher threshold for evidence that should deter mergers; and

Mergers and acquisitions are important business decisions that help chart the course of innovation and bring benefits to consumers. Regulators are faced with tough decisions with every merger. Consumer benefits are lost when a merger or acquisition is halted, reverberating throughout the whole of the industry as other companies reconsider similar deals.

Meanwhile, rapid and disruptive competition has become the norm for high tech industries – consider the rapid decline of MySpace, for example. These industries are characterized by rapid innovation, declining costs, product specialization, and competitive price differentiation. One important example is broadband, which is now central to two proposed mergers: Comcast-Time Warner Cable and AT&T-Direct TV.[1]

Most merger analyses begin with an exploration of how big the resulting company will be; the big-is-bad trope is a constant.  The next step is usually to make an argument about the potential market power that the new firm will have over the relevant market. Moreover, by narrowly tailoring the market definition, and thus the competitive elements the company faces, analyses are able to reinforce the putative rapacious nature of the firms. Especially in broadband markets, the narrowly tailored market definition misses the competitive economic realities that companies face.

To understand and assess modern media mergers in the broadband space, we must ask the most basic questions: what effect do mergers have on consumers, how should we broadly think about mergers, and what kind of competition should we expect after a merger?

What Effects do Mergers Have on Consumers?

Mergers and acquisitions can carry real gains for consumers, by changing both the company and the dynamics of the relevant market. Specifically, they can help bring about upgrades or investment within a company, transfer technology between firms, and spur the industry to bring about new innovations to market.

First, companies that decide to merge in the broadband space could expect two kinds of internal efficiency gains. For one, it will be easier to buy inputs in bulk, including all of the wires, routers, and switches that make Internet connections possible. Similarly, because companies bundle TV with their broadband offerings, there are likely to be cost savings for consumers with television inputs, namely programming. Also, networks can invest in those points of critical concern. The critical junctures where the internet service provider (ISP) connects to the larger Internet and other networks, known as interconnection points, are in constant need of upgrades, which larger firms can do far more quickly.

The 2008 Sirius XM merger supports this broad notion of internal growth. The merger seemed to be a good fit for both of the companies; each of which had been around since the early 2000s. Yet, the announcement brought with it a backlash of voices claiming that it would bring a monopoly to a nascent market. FCC Commissioner Michael Copps dissented in the deal claiming that “no one has been able to explain to me how this could possibly serve the public interest.”[2] After a 57-week review process, the deal went through, but with countless conditions. The long drag by regulators was partly the cause of Sirius XM’s bankruptcy filing after the merger, not to mention the explosion of smartphones in 2008, which dramatically changed the in-car music experience and expectations for growth. Had Liberty Media not came to the rescue with a $530 million loan, it is not clear that the company would have survived, but in the time since, the merged company began to expand viewership and reach more consumers by working closely with car manufacturers to develop new lines of products. In retrospect, the deal clearly served consumers.

Second, technological transfers from mergers and acquisitions benefit consumers. In the case of Comcast, they have touted their X1 platform, which could help initiate innovation in the set top space (if paired with regulatory reforms). This new technology would likely be shared with all current Comcast and Time Warner Cable customers. [3] Also, full Internet based TV has been discussed since the late 1990s, but only recently have the speeds and intelligence of the Internet networks enabled through acquisitions allowed for these types of services to be feasible.  AT&T’s acquisition of the wireless company Alltel is technology transfer of a similar vein, as it helped to extend out AT&T’s advanced LTE rollout to 4.6 million people.[4]

Lastly and importantly, mergers and acquisitions often bring on new investment and spur competition within the industry. AMD’s acquisition of another chip manufacturer, NexGen, gave AMD the start it needed to compete with Intel, then the giant of the microprocessor industry.[5] That deal was the beginning of a long back and forth between AMD and Intel that continued with the purchase of another hardware producer, ATI Technologies.[6] The defeats lead Intel back to the drawing board, which resulted in the Core chips, easily Intel’s most successful product. Speed increases in the chip industry have been impressive, exemplifying just how important mergers can be in spurring further competition.

How Should we Broadly Think about Mergers?
The first step to analyzing any merger is to define the relevant markets in which the merged company would operate. In recent years, the clear lines between markets have blurred, sparking a scholarly debate on just how dynamic markets should be understood in antitrust law.

“Whether at the FTC or the FCC, all regulators of technology should embrace two fundamental principles: One, regulatory humility. Two, a focus on evaluating consumer harm. Unless regulators follow these two principles, even agencies with the best-designed statutory and regulatory structure will be less effective and possibly make consumers worse off.”[8]

Regulatory humility is a broader term for two important principles of rulemaking. For one, it is extremely difficult to predict the path of technology and guide it to a preferred outcome. Second, as past mergers and present competition show, companies face more effective scrutiny from the market and consumers than possible from either the DoJ or FCC. Together, regulatory humility requires a much higher threshold on just what evidence is needed to deter mergers.

When Time Warner Cable merged with AOL, there was fear that the larger company would dominate the Internet and thus stifle innovation. Even an FCC Commissioner decried the deal, but these worries were clearly overblown. Technological winds shifted away from AOL’s core business in Internet service, and the synergies that were expected on the technological and management side never materialized. While AOL once seemed unassailable, it is now largely a content production company with a greatly reduced market share. In the end, consumers ultimately proved to be arbiters of the deal.

What Kind of Competition Should Consumers Expect in Broadband Markets?
By most important lines of performance, broadband as a whole is competitive and dynamic, marked by falling prices,[9] expanding output, rapid innovation, and convergent competition. Broadband is still a young market and is rapidly developing. Before 2000, broadband did not exist as a practical option for residential consumers.[10] The result of increasing speeds over the past decade has been the formation of a “broadband ecosystem” that also encompasses device makers and applications, which provide both complementary and competing services.[11]

Average download speeds in America have increased 27 percent in the past year.[12] The 6-year historical trend is depicted in the chart below.  The U.S. is now the ninth fastest country overall. Last year alone, the number of Internet subscribers with a connection over 10 Mbps jumped nearly 70 percent, putting the U.S. close behind small countries like South Korea and Japan where the population density makes it cheap to build networks. 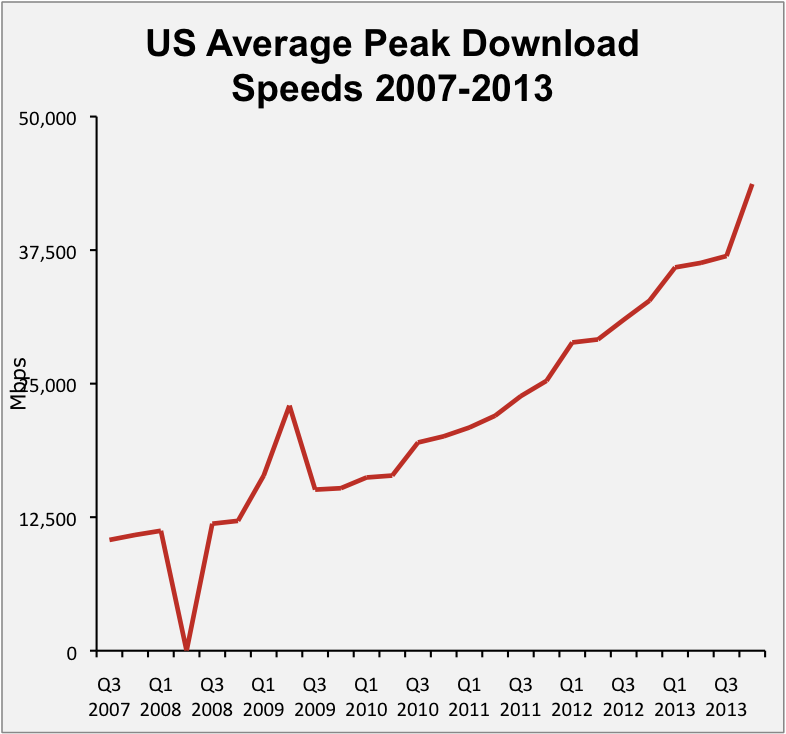 Faster broadband speeds are upending the cable industry’s traditional product. A recent survey found that 23 percent of Netflix subscribers have canceled their TV service. Netflix and other Internet content providers increasingly compete for attention. As a result, consumers are cutting the cable all together, or choosing basic packages with Netflix and Hulu as additional “channels.” While cable is indeed the largest U.S. broadband provider, its share of TV distribution is only a little more than 50 percent with total subscribers on a decline from 2008. Fifty-five million American homes now get video from non-cable providers such as Verizon’s FiOS and satellite, who have cut into the core business.[13]

Pressure is not just being applied in the video space. Like cable’s upgrade of the last couple years, AT&T and other telecommunication companies are currently upgrading DSL infrastructure for faster broadband service. New DSL technologies will give consumers faster speeds over a variety of networks and AT&T’s $6 billion network investment will upgrade the majority of the telephone network. As the FCC’s most comprehensive plan for faster Internet had suggested, DSL is uniquely situated to serve consumers as it covers just shy of 90 percent of the households in the US. Though Google’s announcement of a fiber project in Kansas City sparked a new wave of interest in fast broadband, CenturyLink and AT&T, two legacy phone companies, have entered into the fray with fiber projects. Competitive analysis should not discount this kind of entry.

The expectations for innovation have changed due to Google Fiber and other high profile projects offering 1Gbps service, which is twenty times faster than the average peak speeds. In Kansas City, the government sped up the permitting process, gave Google rights-of-way access for little to no cost, and allowed Google to build-out in select neighborhoods where consumers actually expressed demand. The local costs of deployment are central to the economic feasibility of fiber.  AT&T’s decision to build a fiber network in Austin just days after Google didn’t come as a result of Google. No business decision could be made that quickly. AT&T offered up a different and more plausible story: a fiber project would only be possible if it were granted the same conditions as Google. Regulatory humility requires that we consider the actual sources of problem. Franchising rules, pole attachments, and other local fees is where competition is potentially hampered.

As past mergers  show, mergers and acquisitions carry real gains for consumers by changing both the company and the dynamics of the market. Ultimately, a merged company will face more effective scrutiny from the market and consumers than from either the DoJ or FCC. This is the essence of regulatory humility and indicative of the current market. Broadband is quickly evolving and is thus facing competitive pressures from countless new sources. In high technology industries, where the stakes are high and consumer benefit has been robust, regulators should be careful not to deter deals that are largely in the consumer interest.