Lifting the Crude Oil Export Ban:  How Increased U.S. Exports will hurt the Russian Market and Help at Home

Crude oil can easily be labeled as one of the most prized commodities and has the potential to give the United States more global leverage than almost any other asset in its possession. However, since 1975 the U.S. has followed a policy that bans crude oil export in response to the 1973 reaction to the Organization of the Petroleum Exporting Countries (OPEC) oil crisis. Since then, the United States has been hesitant to utilize this prized resource and is to date the only country in the world that does not allow for the export of crude oil.

In the past decade, falling oil imports and increased product exports have been caused by a lackluster demand for unrestricted petroleum product exports and rapidly rising crude oil production. This coupled with issues of national security have heightened the attention paid to the oil export ban debate.

The following data show that the oil export ban has hindered domestic growth and has created an international market barrier that is in desperate need of being removed.

From Russia with No Love

If the crude oil export ban was lifted tomorrow, U.S. supplies headed to domestic refineries could be rerouted and placed on ships almost immediately to be exported overseas. This quick reaction would have immediate consequences for the Russian crude market which supplies most of Eastern Europe with their crude needs. As evidenced in the chart below, Eastern Europe dominated the list in terms of Russia’s crude and condensate exports in 2012 accounting for over 3 million barrels per day. 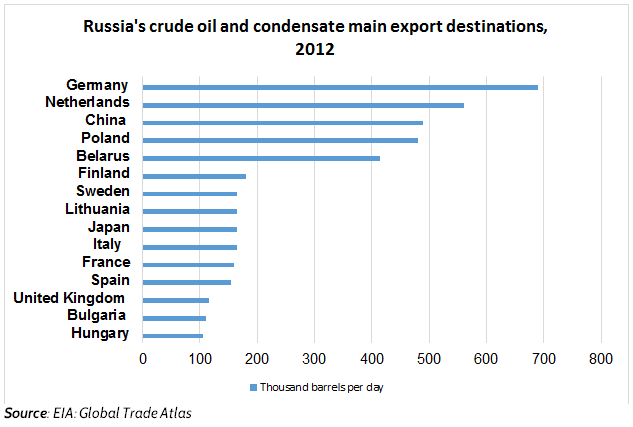 In 2013 Russia received almost four times as much revenue from exports of crude oil and petroleum products as from natural gas. That same year, roughly 33 percent of Russia gross export sales were to Europe. According to EIA, crude oil exports alone were greater in value than the value of all non-oil and natural gas exports.[1] 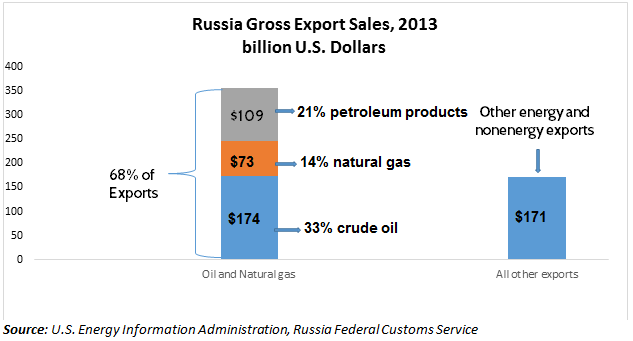 A country like Poland, which gets 96 percent of its oil imports from Russia, can narrow the margins on those imports, not entirely, but enough to loosen the stranglehold that is currently in place [2].

The U.S. has an estimated capacity to export between 500,000 and 1 million barrels of crude per day. This could reduce Eastern Europe’s dependence by nearly one-third.

The chart below examines the price loss that Russia would see based on the amount of crude oil the U.S. would be able to supply (based on barrels produced per day). Using EIA’s predicted $61.00 2015 Brent Crude Price averaged with EIA’s predicted 2015 WTI price at $55.35[3], each barrel would amount to $58.17 in today’s market. This translates to a loss of almost $58,710,000 per day. Calculating at 1,000,000 bbl/d dollars a day in turn amounts to over $21 billion (gross) a year. At 750,000 bbl/d the loss would be around $44 million per day or $15.9 billion per year. At the low end of the spectrum, a 500,000 bbl/d the loss would be in the arena of $29.25 million per day or $10.7 billion per year. These numbers don’t reflect the positive U.S. domestic implications which would come along with these hefty price tags. (These estimates are, of course, subject to change as oil prices are highly volatile.) 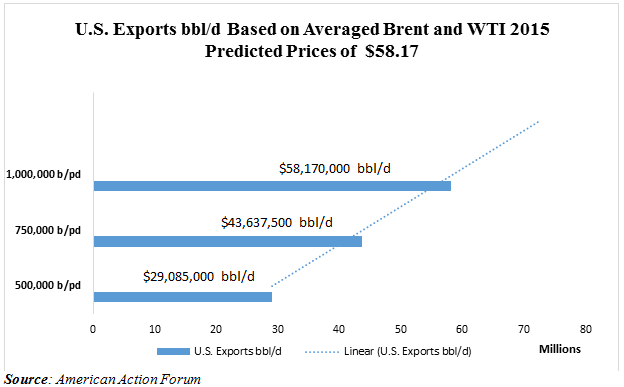 The Energy Information Agency is piecing together parts of a larger analysis including an ongoing economic analysis which includes chemical characteristics analysis, causation of gasoline prices, cost of refiner upgrade to process light and other factors; these pieces will be part of a larger analysis that is set to be released in late June or early July and the findings will allow the EIA to take a position on lifting the ban.  EIA has not forecasted what the production increase would be and it is unsure if those figures will be released with the larger analysis this summer.

One study released by the Brookings Institute stated that lifting the ban could contribute  between $600 billion to $1.8 trillion to the U.S. economy and save drivers up to 12 cents a gallon.

Why is the U.S Importing?

Lifting the crude export control ban would allow for the inclusion of additional markets for U.S. light sweet crude.

On May 12th, 2015, Senator Murkowski and Senator Heitkamp introduced the “Energy Supply and Distribution Act of 2015”   to repeal the oil export restriction and promote the efficient exploration, production, storage, supply and distribution of energy resources without a Federal license to countries that are not restricted by sanctions from the United States.

Section 13 of the bill specifically states:

“Notwithstanding any other provision of law, to promote the efficient exploration, production, storage, supply, and distribution of energy resources, any domestic crude oil or condensate (other than crude oil stored in the Strategic Petroleum Reserve) may be exported without a Federal license to countries not subject to sanctions by the United States.”

In an effort to increase domestic production and support our allies abroad, the economic data argues for an end to  the crude export control ban. Similarly, global power balance concerns support lifting the ban and loosening the stranglehold that hostile countries such as Russia have on large portions of Eastern Europe and others around the globe. Lifting the crude oil export ban and allowing market access in places that have been off limits for decades will create a flurry of production that will benefit both American consumers and the global oil market.