Facing the worst recession since the Great Depression, federal policymakers enacted an unprecedented extension in the duration of unemployment compensation. The normal joint federal-state Unemployment Compensation (UC) program provides up to 26 weeks of benefits. However, high state unemployment rates triggered the Extended Benefit (EB) program and federal lawmakers enacted the Emergency Unemployment Compensation program. As a result, during the recession and slow economic recovery, unemployed workers could receive benefits for up to 99 weeks. While these temporary changes in policy were intended to provide relief to distressed unemployed workers and act as a stimulus to increase spending, evidence suggests they also had a negative side effect of decreasing the number of job opportunities and increasing unemployment. After these temporary benefit extensions expired at the end of 2013, the labor market continued to improve at a rapid pace (perhaps as a result of the expiration), suggesting that extended unemployment benefits are no longer necessary.

Why do we have Unemployment Compensation?

The UC program was first introduced by the Social Security Act of 1935, and was intended as a primary resource for those who lost their jobs during an economic downturn. The UC program makes payments to eligible unemployed workers so they can still afford basic necessities of life while they search for new work.[1]

Federal law outlines requirements for the UC program, but it is up to the states to administer the program. While benefits differ by state, most base their payments on wages over the previous year. In general, states require extensive work history and replace up to 50 percent of the unemployed workers’ pay rate. States also set a maximum benefit amount, which tends to be half of the average wage in a state. As a result, in January 2013 weekly benefit maximums ranged from $133 in Puerto Rico to $674 in Massachusetts.[2]

In times of severe and prolonged economic hardship, however, lawmakers have concluded that an extension of the normal 26 week UC program is warranted. Severe recessions are often accompanied by a high rate of long-term unemployment in which a large number of workers are unemployed for over 26 weeks and would exhaust their benefits without an extension. Thus to help those workers lawmakers have enacted laws to extend the duration of UC benefits. In addition, policymakers frequently believe that extending UC benefits during a recession can be an effective stimulus for the economy as unemployed workers are likely to spend most of the benefits they receive.[4]

How the Government Expands Unemployment Compensation

During recessions, the federal government has adjusted the regular UC benefit through both the permanent EB program and temporary extensions in the duration of unemployment benefits.

The EB program was established by the Federal-State Extended Unemployment Compensation Act of 1970. Under the Act, when the insured unemployment rate or total unemployment rate in a state reaches certain thresholds, a state must provide an additional 13 or 20 weeks of unemployment benefits. As a result, the combination of the EB 13 to 20 week duration and the regular UC 26 week duration results in up to 39 or even 46 weeks of benefits. Usually, the EB program is funded by both the state and federal governments. But, in the most recent recession, the federal government opted to pay all EB costs from February 2009 to December 2013.[5]

As table 1 illustrates, the emergency extensions in unemployment compensation grew significantly over time. Initially, the federal government enacted extensions that provided for an additional 13 weeks of benefits. Then those programs grew to an additional 26, 16, 33, and 26 weeks for each program from 1974 to 2002. Between the regular UC, EB, and temporary extensions, the total duration of benefits available to unemployed workers grew during times of economic crisis from 39 weeks in 1958 to 72 weeks in 2002.[7]

None of these extensions in unemployment benefits however compare to the unprecedented expansions in benefits that occurred in 2008 during the Great Recession. The Emergency Unemployment Compensation Act of 2008 (EUC08) provided benefits for up to an additional 53 weeks. This means that between UC, EB, and EUC08, unemployed workers could receive up to 99 weeks of benefits.

Labor Markets and the Great Recession[10]

When lawmakers enacted and expanded EUC08, the labor market had been severely damaged by the Great Recession and showed no signs of improving anytime soon. As depicted in Figure 1, the total unemployment rate increased from 5.0 percent at the end of 2007 to 7.3 percent at the end of 2008. By the end of the recession in June 2009, the unemployment rate had risen to 9.5 percent and continued to increase during the recovery, peaking at 9.9 percent in 2010.

Women and men both faced troubling labor markets as the unemployment rate quickly increased for each gender.

During the recession, lawmakers viewed the duration of regular UC benefits as inadequate particularly because long-term unemployment spiked. Specifically, those who had been unemployed for over 26 weeks and exhausted their regular UC benefits grew dramatically. This trend is illustrated in Figure 3.

For instance, from the end to 2007 to the end of 2008, long-term unemployment virtually doubled from 1.3 million to 2.6 million. The number of long-term unemployed increased even further, reaching over 6 million people in the following years.

Consequently, long-term unemployment came to represent a significant portion of all unemployed people over the last few years. Figure 4 illustrates this trend.

At the end of 2007, long-term unemployment only made up 17.4 percent of all unemployed people. In 2010, those who had been unemployed for over 26 weeks represented 44.9 percent of unemployed workers.

Other troubling trends that plagued the labor market during the recession included steep declines in job hiring, openings, and quits. High levels of hiring and openings indicate job creation. In addition a high level of people quitting their job is a healthy sign because it indicates improved job mobility and confidence in the ability to find other work. During the recession, however, all three indicators nose-dived.

The Negative Side Effect of Extending Unemployment Benefits

At the end of 2013 lawmakers did not extend EUC08 any further and allowed it to expire, which significantly reduced both the number of people receiving unemployment benefits and the duration of the benefits still available. Since state labor markets had vastly improved by this point, EB was also no longer available. As a result, in most cases benefits were only available for the regular UC duration of 26 weeks.

In total, the end of EUC08 resulted in unemployment benefits expiring for 1.3 million people. Several lawmakers feared that allowing EUC08 to expire would be harmful to the long-term unemployed who have yet to find work. This concern, however, ignores the fact that the expiration of EUC08 could improve worker well-being by allowing the labor market to grow quicker.

So, how has the labor market improved after EUC08’s expiration? Since the beginning of 2014, several labor market indicators have accelerated in positive directions. For instance, the unemployment rate in 2014 fell much quicker than many anticipated. 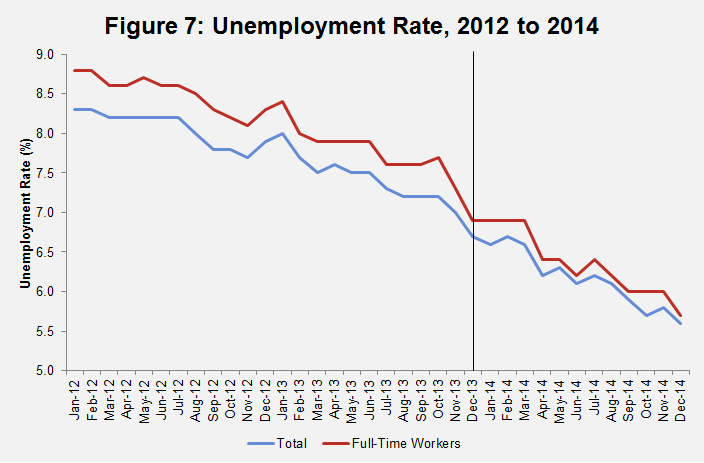 Likewise, the expiration of emergency unemployment benefits also coincides with a steep decline in long-term unemployment, as illustrated in Figure 8. 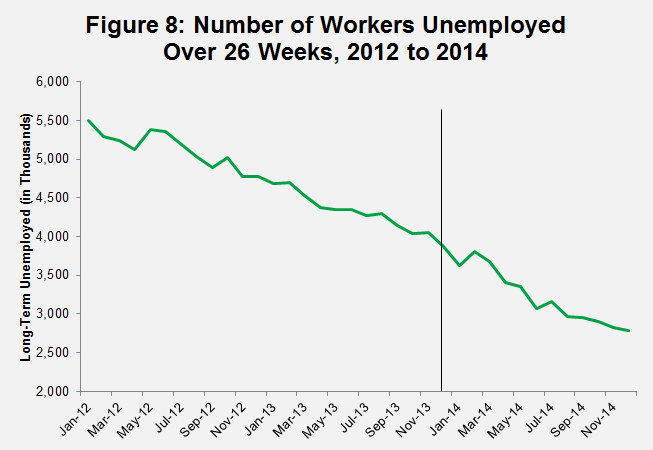 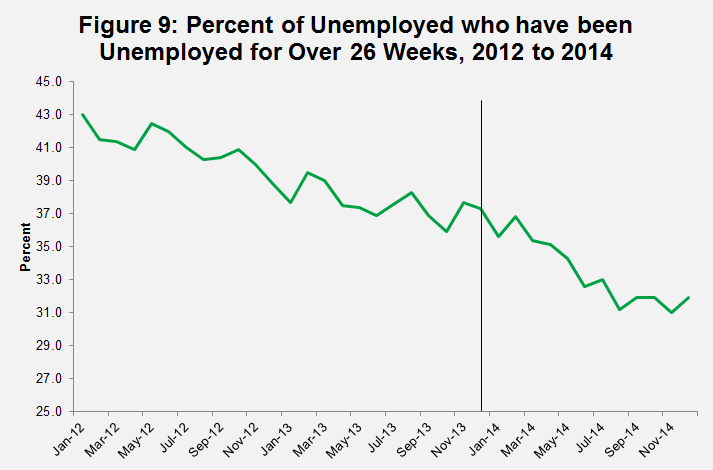 Since EUC08 expired a year ago, unemployment and long-term unemployment have both fallen significantly. It is important to note that when workers are no longer unemployed it does not necessarily mean that they found a job. Rather, it could mean that they gave up looking for work and left the labor force.

Fortunately, over the past year those who are leaving unemployment do not appear to be leaving the labor force. This is evident by a few facts. First, as of December 2014 the labor force participation rate was 62.7 percent, only 0.1 percentage point lower than the 62.8 percent rate in December 2013. This means that virtually the same proportion of the population either has a job or is looking for work. Second, in 2014 the country witnessed a surge in hiring and job openings. 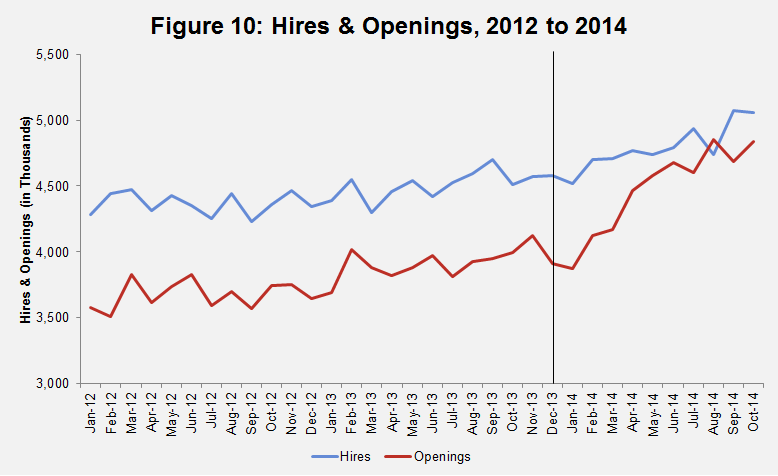 The increase in hiring demonstrates that more people are finding work and the boost in openings indicates that businesses are demanding more labor. Moreover, the jumps in both indicators coincide directly with the expiration of extended unemployment benefits. This is particularly true of job openings, which increased by 900,000 from 3.9 million in December 2013 to 4.8 million as of October 2014. That is a major acceleration in openings considering that they only rose 300,000 in 2013.

Researchers at the Federal Reserve Bank of New York believe that the spike in job openings is at least partially due to the expiration of unemployment benefits.[13] The authors argued that when the benefits expired, the upward pressure that extended benefits places on wages diminished, making employers more willing to hire additional workers. This is evident in the accelerated rise in job openings, which directly coincides with the expiration of EUC08.

[10] The ensuing labor market statistics were obtained from the Department of Labor’s Bureau of Labor Statistics and the Federal Reserve Bank of St. Louis’ Federal Reserve Economic Data (FRED).