Six Ways to Lead on Oil and Gas

The significant and persistent U.S. energy boom is happening in spite of government obstacles to resource development. AAF research proved that federal land use management agencies keep more than 60 percent of federal oil and 40 percent of federal natural gas resources closed to development. To maintain the U.S. position as the world’s leading oil and gas producer and continue to challenge the power of Organization of the Petroleum Exporting Countries (OPEC), Russia, and other diplomatic antagonists, the government must find ways to improve its management of domestic energy resources. This paper outlines six steps the U.S. government can take to do just that.

One: Be Aware of Resources

AAF research was based on the Inventory of Onshore Federal Oil and Natural Gas Resources and Restrictions to Their Development (Inventory), a 2008 study commissioned by Congress and authored by the Departments of the Interior, Agriculture, and Energy. As its title suggests, the report was a thorough assessment of energy resources on federally managed lands and it examined how the federal land use management agencies, especially the Bureau of Land Management (BLM) at the Department of the Interior and the Forest Service at the Department of Agriculture, approach their stewardship responsibilities.

The Inventory used data through 2006, however, and so excluded updated resource and recovery estimates made possible by advancements in imaging and fracking technology in the shale and tight oil deposits driving the energy renaissance. Note from Figure 1 that estimates of oil and natural gas resources have increased dramatically since the Inventory release date.

A 2012 report from the Congressional Budget Office estimated that about 70 percent of federal oil and gas reserves are open to leasing, a far higher figure than determined by the Inventory. Regularly updating this document will provide reliable planning information on the distribution of resources and compel regular performance evaluations of how federal agencies are managing lands and resources.

Two: Give States a Larger Role

The federal government owns and manages 28 percent of all U.S. lands. In ten states, the government manages more than one third of all lands; in five, it manages more than half (Table 1). Nearly half of all federally owned lands are managed for underlying oil and gas resources, and a full 60 percent of oil and gas lands are entirely closed to development. Combined, these factors produce huge distortions at the state level that remove local voices and interests from land use management decisions.

Table 1. Portion of State Lands Managed by the Federal Government

These policies are unsustainable. Oil and gas development is thwarted, sure, but so are land-intensive clean energy plans necessary to comply with state-level renewable energy targets and pending federal greenhouse gas regulation. To enable flexible, informed land use strategies that best address local energy goals, the federal government must give states a larger voice in land management decisions or devolve ownership or management authority to the states. States are the wisest users of their own resources, and best know how to protect the local environment, people, and prospects for growth; their role must be strengthened.

At the time of the Inventory, 20 percent of federal lands with oil and gas resources were closed to development while undergoing land use planning and environmental review processes. While it would be reckless to rush through the assessments that will inform wise land use, wise use also requires that these assessments be completed in a timely manner. The energy boom revealed that new technologies can identify enormous resources in unlikely places. Tying up lands in endless review processes limits their utility and defers development, employment, and revenue benefits ultimately due to American taxpayers.

Four: Clarify the Rules of the Road

It is apparent that federal land managers have unclear processes for leasing and permitting that undermine the ability of oil and gas operators to access and develop resources. For example, AAF research showed that leasing activity at BLM declined 20 percent over 2011-2013 at the same time that industry nearly doubled its requests for new leased acreage.

BLM permitting processes also generate confusion and delays. On average, it took 222 days to process an Application for Permit to Drill (APD) at BLM over the last decade (Figure 2). Industry operators took 135 of those days to file and complete a permit application. Any application that takes 135 days to accurately complete is far too convoluted. BLM should clarify and clearly communicate permit application requirements with the goal of reducing annual average APD process times back to the 2005 low of 154 days. While this will still be far longer than state permit approval timelines (which take a few weeks), it is a clear and achievable target. 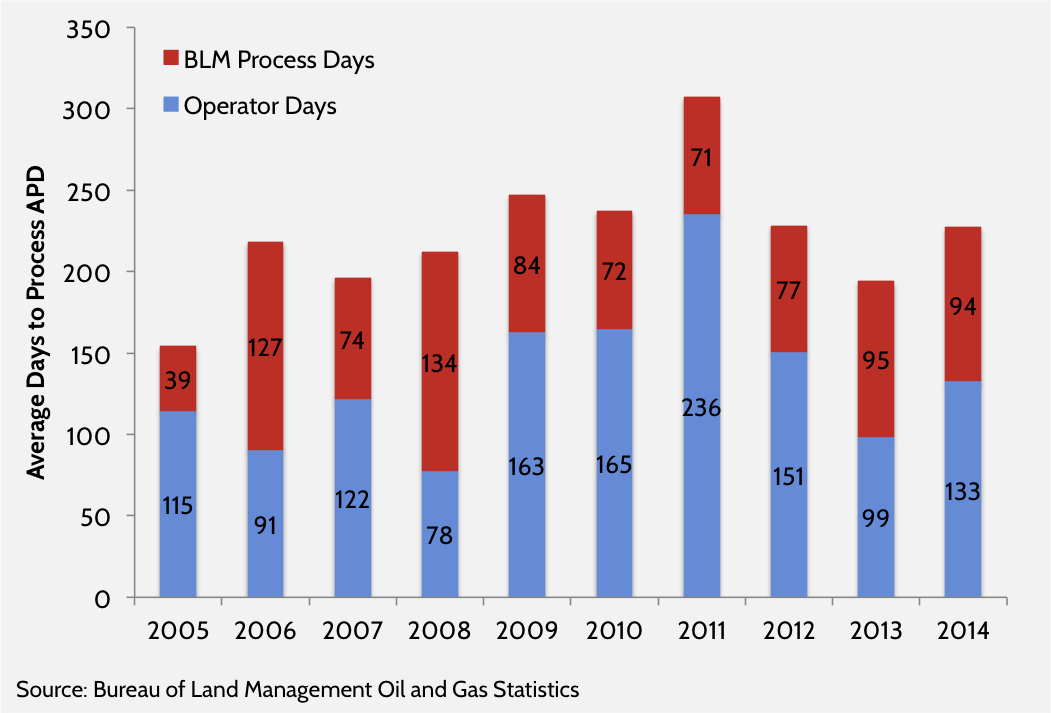 There are real and serious ongoing management issues at BLM. Both the Government Accountability Office (GAO) and the Department of Interior Inspector General released reports in the last two years suggesting that management issues at BLM slow down the permitting process and prevent effective oversight of development projects. Even the 10-year Federal Permit Streamlining Pilot Project to improve the efficiency and speed with which BLM processes permits has gone without the oversight necessary to determine its effectiveness.

Congress should not judge the benefits of natural resource policy based strictly on a 10-year budget score. This is a common tool for evaluating legislation, but congressional action to open lands or increase the pace of permitting will not result in a favorable assessment for two important reasons.

First, it is extremely difficult to positively score a more rapid leasing and permit process. About 80 percent of lands managed for oil and gas resources are open to development by law and limited only by various restrictions and lease stipulations imposed by federal land managers. As the Congressional Budget Office describes, “Federal agencies can impose or lift those restrictions at any time, so their long-term effects on leasing, production, and federal receipts are not quantifiable.”

Second, opening up new areas to development will not yield significant revenues in a budget score. Untapped areas will require environmental analysis, permitting, and infrastructure construction, which can delay oil and gas production and resulting revenues well past the 10-year scoring window. Some land use plans analyzed in the Inventory have been in effect since 1976; land use planning by nature has to focus on good policy over the long-term.

Congressional actions that would expedite or improve federal permit and leasing should not be judged solely by a favorable 10-year budget score. To create meaningful and lasting progress in land management requires a long-term view that won’t necessarily improve the federal budget outlook today.

The U.S. economy has relied on proactive states and companies to drive the energy boom thus far. It’s time for the federal government to move past inefficient and obsolete land management policies and be a proactive participant in the energy economy.