The Keystone Delay is Costing us More than Jobs and Revenues 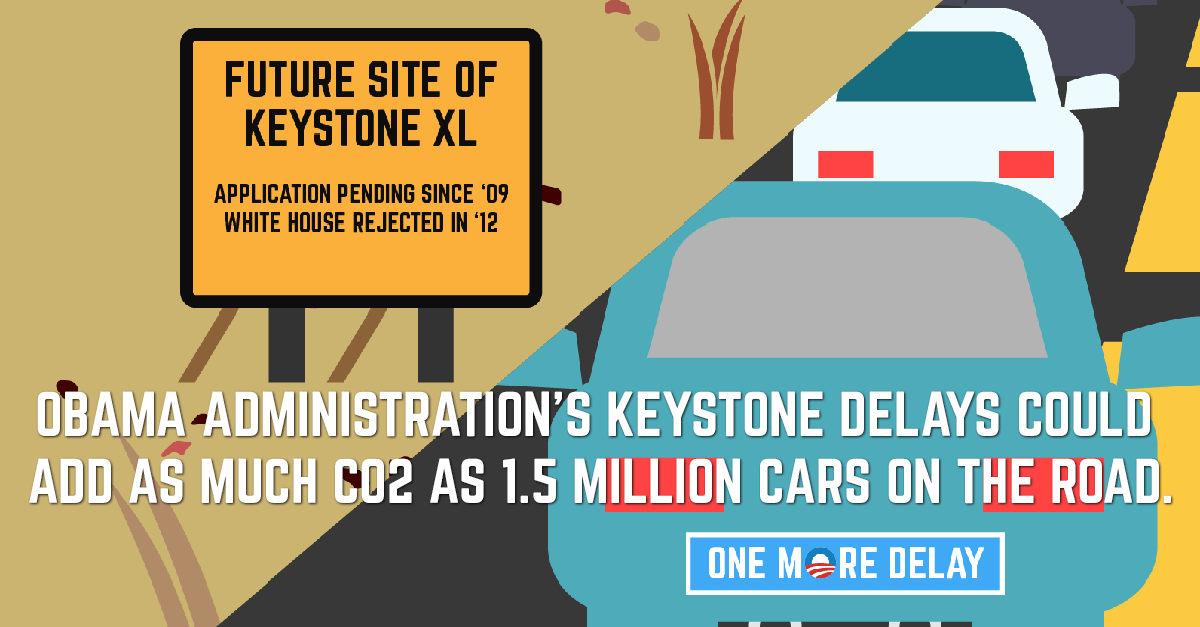 The five-year delay in building the Keystone XL pipeline is costing us jobs and wages, limiting our access to low-cost North American oil, and facilitating our continued reliance on oil from the Middle East and Venezuela. While the economic costs of delay are well documented, the environmental and human impacts could also be devastating. The delay has the potential to cause up to:

When built, Keystone XL will carry roughly 4 percent of daily U.S. oil consumption in a safe, efficient, sophisticated pipeline. While awaiting approval, however, the market has taken steps to gain access to that oil in ways that don’t require White House approval – namely, moving oil by rail. The State Department analyzed a number of alternative rail scenarios[1] and found that the Keystone XL pipeline excelled by comparison, reducing carbon emissions, oil spills, and risk of injuries and death.

On January 18, 2012, President Obama had the opportunity, under the instruction of Congress, to approve the pipeline. If he’d approved, we project that the pipeline would have begun operations this past May. Instead, he rejected it and opened a second, arduous review process.

Now, the White House is saying that they’re waiting on the resolution of a case before the Nebraska Supreme Court before resuming the State Department process. Our analysis makes the following assumptions to calculate how long this delay will be:

1.      The pipeline will take about 2 years and 4 months to build following approval. This is based on reported and revised in-service projection dates from TransCanada.

2.      The Nebraska Supreme Court will hear the case in September of this year.

4.      If the Court returns the decision on the pipeline to the Nebraska Public Service Commission, that consideration process will take 7-12 months.[3]

5.      Optimistically, we project that the State Department review process will take 4 months after the conclusion of affairs in Nebraska.

Taken together, this means that the president’s decision to reject the Keystone XL pipeline in January of 2012 delays the in-service date by at least three years. We’ll project a minimum delay of 38 months and an illustrative maximum delay of 68 months. There is no time limit placed on the State Department review process, so the delay could be much larger than projected.

If the president had approved the Keystone XL pipeline, it would have prevented the release of an additional 2.7 to 7.4 million tons of CO2e to the atmosphere – the equivalent of taking 500,000 to 1.5 million passenger vehicles off the road or shutting down one coal facility.

Pipelines are an energy-efficient, low-carbon fuel transportation option. Carbon emissions come from fuel required to operate pipeline pump stations and maintenance vehicles, as well as small methane emissions at connection points. Rail requires relatively more fuel to operate, including diesel to power the locomotives and electricity to service rail terminals. From the State Department report, we know that the rail options emit 28-42 percent more during normal operations as compared to the Keystone XL pipeline. The following table summarizes what those relatively higher greenhouse gas (GHG) emissions mean over the window of delay.

Replacing the capacity of the Keystone XL pipeline with rail transport risks additional oil spills and the release of up to 23,318 additional barrels of oil – nearly a million gallons of useful fuel entering the environment instead of the economy.

Oil-by-rail has produced some high profile spills, including major derailments in Alabama, North Dakota, and Virginia over the last two years. Even when delivering 99.99 percent of shipments without incident, oil-by-rail resulted in 1.15 million barrels of spilled crude oil in 2013 – that’s 39 percent more than total spills over the preceding four decades.[5]

Pipelines minimize spills. Of course, there have been some high profile events recently, like a rupture in ExxonMobil’s Pegasus pipeline that spilled as much as 7,000 barrels of heavy crude in Mayflower, Arkansas. By design and with strong maintenance requirements, however, pipelines have a lower spill rate than rail. According to the State Department report, the Keystone XL pipeline would result in less than one release every two years and an average annual release of just 518 barrels per year.

Rail on the other hand, risks more frequent spills with a larger cumulative impact. Table 2 summarizes this considerable additional risk.

The delay in building the Keystone XL pipeline risks up to 1,065 additional injuries and 159 additional fatalities.

By virtue of serving urbanized areas, railroads carry a certain risk to the public. A July 2013 train derailment in Lac-Mégantic, Quebec devastated the downtown and caused 47 deaths. Though this tragedy is unique in size, the paths of railways intersect frequently with population centers. The Keystone XL pipeline is designed to minimize this risk, routed to avoid sensitive, sacred, and historic sites, as well as densely populated areas.

According to the State Department, the Keystone XL presents annual risks of 1 injury and no fatalities. Rail presents a substantially higher risk of 189 injuries and 28 fatalities each year. This additional risk over the length of delay is summarized in Table 3, below.

To be clear, this is an assessment of risk in terms of statistical lives – the actual numbers can be far lower. The State Department projected these figures based on a decade of rail accidents as reported by the Federal Railroad Administration. Assuming historical trends hold, we would expect to see these results if rail cars are deployed to transport the same volume of oil that Keystone XL would carry.

The market will find a way to deliver products to customers. In this case, that means comparing the risks of building Keystone XL to the alternatives. Replacing pipeline with rail-based crude oil transport presents real, measurable risks to the climate, our natural environment, and Americans’ lives and safety. There is a distinct possibility for an indefinite administrative delay to building Keystone XL – a possibility we cannot afford.

[1] An in-depth analysis is available in Volume 4 of the Final Supplemental Environmental Impact Statement, accessible via the State Department portal at http://keystonepipeline-xl.state.gov/finalseis/index.htm

[7] Author’s calculations using data summarized in Section 5.3.3 of the State Department Final SEIS as revised by a June 2014 Errata Sheet to the Final SEIS

Recent calls to defund the police, while controversial, have brought to light opportunities for more targeted reform.

EXECUTIVE SUMMARY A review of the 179 federal rules subject to the regulatory budget that were finalized between October 1, 2019, and September 30…

Police budgets vary widely across the country, both in nominal terms and as a percentage of a community’s overall budget.