The Most Expensive Dodd-Frank Rule Adds to Law’s Burden

Two new Federal Reserve rulemakings in the last month have pushed Dodd-Frank’s aggregate financial costs past $35 billion, with $29.3 billion in final rules. With more than five years of implementation, it’s clear that regulators still have dozens of new measures left to propose and finalize. The most expensive portions of the law could ultimately lie ahead for consumers.

Broadly, the Federal Reserve occupies a somewhat discrete place in the regulatory world. It doesn’t consume the oxygen of the Environmental Protection Agency or even the Securities and Exchange Commission. On its own authority, it has imposed roughly $300 million in costs pursuant to Dodd-Frank, in addition to 4.8 million paperwork burden hours. These might seem like pedestrian figures, but it’s important to recognize that it would take more than 2,400 employees working full-time (2,000 hours a year) to complete the Federal Reserve’s new paperwork. Now, two rulemakings, one jointly authored by the Federal Reserve and one issued independently, have only added to the agency’s Dodd-Frank portfolio.

Recently, a quintet of financial regulators issued a final rule implementing a Dodd-Frank measure on “Margin and Capital Requirements for Covered Swap Entities.” Despite initial projections of costs ranging up to $46 billion, both the proposed “Regulatory Impact Analysis” (RIA), and final RIA centered on a cost figure of $5.2 billion; it now represents the most expensive rule under the landmark financial reform bill in its five-year history.

Given that there were five agencies (Comptroller of the Currency, Federal Reserve, FDIC, Farm Credit Administration, and Federal Housing Finance Agency) involved in the formation of this rulemaking, the proposed rule stretches to 281 pages, but the analysis from the proposed to final version is almost identical. Both proposed and final rules estimated $644 billion of initial margin would be required.  As with many of the estimates in the analysis, the range of figures is questionable. For example, the margin required could be as low as $280 billion or as high as $3.6 trillion, but the agencies chose $644 billion because it “falls roughly in the middle.” This is only true, if you have a creative definition of “roughly” and “middle.” The mathematical midpoint of the above range is $1.94 trillion or three times the central figure the agencies selected.

The midpoint figure of margin dictates a baseline for calculating compliance costs. As the rule notes, “Using our initial margin estimate of $644 billion, every basis point of lower return equals $64 million. If we assume a 100 basis point difference in return, the opportunity cost of the fully phased-in initial margin requirement would be $6.4 billion.” This 100 basis point is the high-end range of opportunity costs; at 25 basis points, the costs total only $2.9 billion. A discounted figure of $5.2 billion is the primary benchmark for the rule’s cost, in addition to more than 52,000 paperwork burden hours.

The baseline for cost arises from three different global studies conducted in 2013. In order to approximate the U.S. share, the regulators merely reduced the amounts in the study by 65 percent, since the U.S. share of the swaps market is roughly 35 percent. In other words, the main benefit-cost estimates rest on assumptions piled on assumptions to yield an incredibly uncertain final calculation.

Strangely, there is no direct discussion of high-end costs in the RIA, just the preamble to the final rule. This could be due to the OCC’s sole drafting of the RIA. In the actual text of the rule, the cost scenarios are more explicit: “The estimated annual costs of the initial margin requirements range from $672 million to roughly $46 billion depending on the specific initial margin estimate and incremental funding cost that is used to compute the estimate.” A 68-fold difference in cost is hardly the level of precision desired from the nation’s premier financial regulators implementing one of the most important provisions of Dodd-Frank. It is even more peculiar that the $46 billion figure was omitted from both the proposed and final RIA.

What does this mean for the nation? The map below attempts to approximate the regional impact of the margin rule based on the affected establishments and the assumptions contained in the cost estimate.

Given the rule’s wide disparities in costs, it’s safe to assume the benefit figures will be equally lacking. The $644 billion margin is considered the prime quantified benefit, just as it contributes to the costs. In the words of regulators, it “creates a new buffer against losses for covered swap entities and other swap market participants.” In addition to this quantified benefit, regulators included four non-quantified benefits, including 1) reduced uncertainty, 2) limiting participants from taking excessive risks, 3) added protection against insolvency of counterparties, and 4) decreased risk associated with swaps.

Finally, on October 30, the Federal Reserve issued additional requirements for “Systemically Important U.S. Bank Holding Companies,” or “Too Big to Fail” institutions. Banks with this systemically important tag will be required to maintain a minimum amount of unsecured long-term debt. Under section 165 of Dodd-Frank, this measure generally applies to all institutions with more than $50 billion in assets.

The cost of this “Too Big to Fail” oversight measure, if finalized, would make it the seventh costliest Dodd-Frank measure to date, at $1.5 billion. To derive this figure, regulators found the covered banks had a capital shortfall of roughly $120 billion, approximately “1.7 percent of aggregate risk-weighted assets.” To replace this shortfall, the Federal Reserve estimated it would cost between 20 and 200 basis points, depending on the type of debt. This translates into a cost range of $680 million to $1.5 billion annually. For perspective, if finalized in FY 2014, it would have been the most expensive rule, according to the Office of Information and Regulatory Affairs.

In terms of benefits, the “Too Big to Fail” proposal projects that it would, “materially reduce the risk that the failure of a covered [bank] would pose to the financial stability of the United States.” The text does not quantify a benefit, but notes that prior to Dodd-Frank, the odds of major financial crisis were between 3.5 percent and 5.2 percent. Presumably, this rule alone won’t significantly lower those odds, only in concert with other rules addressing risk will Dodd-Frank reduce the chances of another crisis.

Thanks in part to the two new rules mentioned, Dodd-Frank’s aggregate costs have climbed substantially since AAF’s last update on the law’s five-year anniversary. Since July, the law’s costs have increased to $29.3 billion, from $24 billion. Paperwork has also accelerated to 72.8 million, up from just 61 million in July. Those are only the final rule costs; combined with proposals that will likely be final, and the Dodd-Frank’s burdens climb to $35 billion in costs and 75 million paperwork burden hours. 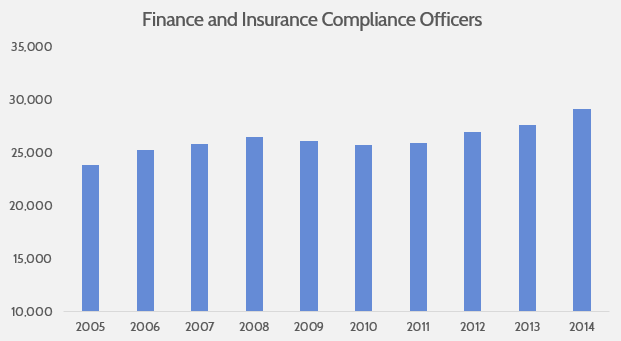 The effects of Dodd-Frank extend beyond just finance, however. In addition to the anecdotal evidence that the law has driven many industries from certain profit-making fields to compliance-driven, there is strong quantitative evidence that federal regulation has contributed to a surge in compliance officers nationwide. Since 2010, the growth in compliance officers nationwide has topped 21 percent. For comparison, from July 2010 to July 2015, total nonfarm payroll in the U.S. increased by just 8.9 percent. In other words, the nation is generating new compliance officer jobs more than 2.3 times faster than the average nonfarm job.

This is hardly the end of the law’s impact. Even five years after passage, the latest Unified Agenda of federal regulation from the administration logs at least 80 scheduled Dodd-Frank regulations pending. According to the data, the Securities and Exchange Commission has the largest slate, with 22 rulemakings. The Federal Deposit Insurance Commission and the Consumer Financial Protection Bureau are second and third with 11 and 10 pending regulations. It’s clear that after litigation, implementation of Dodd-Frank could take another five years, with economic impacts for decades in the future.

Far beyond the walls of compliance offices and law firms, Dodd-Frank is reaching into family bank accounts and small businesses with its burdens and costs. The purpose of Dodd-Frank was partly to stem abuses and fix systemic weaknesses in the financial sector that came about when the housing bubble burst and helped cause the financial crisis. But, in its efforts to make the financial system safer, Dodd-Frank has restricted the availability of many financial products and credit, particularly for low-income borrowers, young people, and minorities.

Lending, whether commercial, real estate, or consumer, has not recovered in this economic recovery as quickly as the average post-WWII economic recovery due to the severity of the financial crisis and environment of tightened credit encourage by Dodd-Frank. Real estate lending has been the slowest to recover, taking six years to reach its pre-recession levels.

Specifically, the swaps rule will duplicate the burdens from another Dodd-Frank product: the Volcker Rule. Volcker was only adopted by four agencies (CFTC, SEC, OCC, and the Federal Reserve), unlike the five for swaps, but it took up 1,000 pages to tell banks to be less risky. In its aftermath, banks have been forced to shed their market-making operations, thereby diminishing liquidity and preventing consumers from being able to trade quickly and at a steady price. Combine that with the higher capital requirements and banks are deciding not to take up excess space on their balance sheets holding inventories of assets awaiting a buyer.

For example, JPMorgan carried $2.7 trillion in corporate bonds in 2007; this year that number is down to $1.7 trillion and falling. That lack of liquidity hurts consumers directly as their options for financial products and services are limited, and indirectly, as less liquid U.S. banks lose their competitiveness – Europe and much of the rest of the world are not restricted by bans on certain activities. It also should come as no surprise to regulators that the banning of certain bank activities, like proprietary trading, will only drive those activities into less regulated or even unregulated areas of the financial system, thereby undermining the entire purpose for these rules.

Further, it is well documented that as liquidity decreases, the cost of capital for businesses increases. There is a positive relationship between stocks’ excess monthly returns and bid-ask spreads for any given level of systematic risk. Thus, average returns are higher for stocks with higher bid-ask spreads, and the increase in the bid-ask spread as a result of rules like Volcker and the swaps rule, will result in higher capital costs for those businesses. The resulting increased capital costs mean slower economic growth and reduced job creation.

More generally, Dodd-Frank’s new rules, oversight agencies, and capital requirements – specifically, the requirements arising from the Too Big To Fail rule, at the current rate, are slated to reduce our GDP over the 2016-2025 period by $895 billion, or $4,346 per working-age person. That is money out of the pockets of consumers as a result of a law that was supposed to be helping consumers.

These two actions by the Federal Reserve have added $6.7 billion in costs, hardly a trivial figure for the nation’s economy, and more specifically, the financial system. This has contributed to Dodd-Frank’s $29.3 billion financial imposition, including more than 72.8 million paperwork burden hours. To put the paperwork in perspective, it would take 36,437 employees working full-time to complete a year of the law’s figurative “red tape.” The margin rule is evidence that, even after five years, the slow crawl of Dodd-Frank regulation will continue to pile up significant economic burdens for the financial system and consumers.