What it Costs to Go 100 Percent Renewable

The “Green New Deal” (GND) is gaining momentum. Initially championed by Representative Alexandria Ocasio-Cortez and the Sunrise Movement, 45 politicians thus far have signed on to the GND, and one poll found that 81 percent of Americans support at least some of the policies of a GND. As outlined by the Sunrise Movement, the primary goal of a GND is for 100 percent of U.S. electricity to come from renewable sources.

While the GND stretches beyond environmental policy, this analysis is limited to the GND’s 100 percent renewable energy target. It finds that such a target is impractical and, even using extremely favorable assumptions, would cost $423.9 billion annually—more than the entire retail cost of electricity in the United States in 2016. This finding is broadly in line with other estimates. The analysis further explains that such a policy is not the most efficient way to abate greenhouse gas emissions.

An accurate assessment of what a 100 percent renewable target costs is extremely difficult, and presumably only feasible with econometric analyses, like those published by the Energy Information Administration, but such estimates will take time to compile (and hopefully will be forthcoming in the future). A number of variables must be taken into account: seasonal variations in productivity and demand of energy resources, transmission availability and the costs, the required discharge rate of storage capacity, the different costs of peaking units versus baseload units, the costs of stranded assets, the economic effects of higher electricity prices, the economic effects of levying taxes to subsidize renewable electricity sources, the higher capital costs of new electricity sources as a mandate spurs new demand, etc. This analysis is an effort at a simplistic ballpark estimate, not an in-depth and precise projection.

For the sake of estimating the cost of a 100 percent renewable target, this analysis makes a series of substantial assumptions. These are as follows: the United States could entirely use solar power during the day, and wind power during the night; for the hours in the day where neither solar nor wind produce their stated capacity (due to capacity factors of electricity sources), it is assumed that a mixture of hydroelectricity and storage is used; the United States builds the entirety of all potential hydroelectricity resources; storage costs associated with batteries is their average operation and maintenance cost, rather than the (significantly higher) costs of batteries that can discharge a lot of electricity quickly and repeatedly throughout the day; electricity demand is roughly flat (rather than demand spiking during afternoon hours); and there is no increase in the price of wind, solar, hydro, or storage, even though a GND would cause the price of those resources to increase as demand is artificially inflated.

The estimate below is likely to be a significant underestimation, as it reflects the lowest imaginable cost of a Green New Deal. 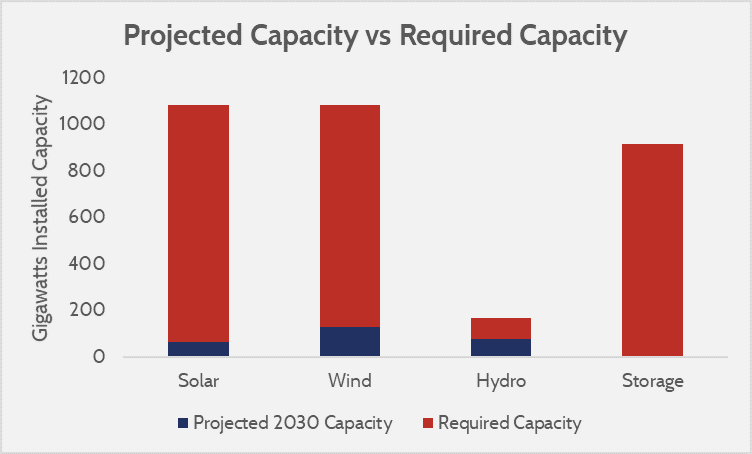 Installing said capacity would be incredibly costly. The table below shows those costs assuming the Energy Information Administration’s latest overnight capital costs and operation and maintenance costs from the 2018 Annual Energy Outlook.

Merely installing the required renewable capacity above projected renewable growth would cost $5.7 trillion. A business-as-usual approach would have 36.7 gigawatts of new (non-renewable) electricity generating capacity being built by 2030, which would have a capital requirement of approximately $48 billion, meaning the net difference in capital investment required between the 100 percent renewable target and a business-as-usual approach is approximately $5.66 trillion. [1]

Combining the $285 billion of capital costs with the operation and maintenance costs results in an average annual expenditure of about $423.9 billion each year. For perspective, total revenue raised in the United States from electricity sales in 2017 was $390 billion. Even under the optimistic conditions of the above assessment, which assume very low electricity storage and discharge costs, and no increased transmission costs, merely building and operating the required number of renewable electric power plants would cost more than what Americans pay for electricity today.

It should also be noted that the above estimate likely seriously underestimates the costs of electricity storage. Storage becomes more expensive if it must discharge quickly, and multiple times throughout the day. The above simply assumes that the type of battery storage being installed at a utility scale today would be sufficient for all purposes, but more nuanced analyses like those from Lazard show an enormous cost difference between storing electricity and generating it. Lazard’s analysis estimates that the cost of wholesale, levelized cost of lithium-ion storage (the total lifetime cost relative to energy saved) would be between $204-298 per megawatt hour. For perspective, the levelized cost of a natural gas power plant is $48 per megawatt hour, meaning using battery storage rather than a dispatchable natural gas power plant could cost consumers 4-6 times as much.

This estimated annual cost figure is roughly in line with other estimates. For example, a Risky Business study, which estimated the costs of transitioning to a clean energy economy, concluded that an average annual investment of $320 billion would be required through 2050, and the model for this estimate assumed more resources than just renewables available. A National Bureau of Economic Research study estimated the net cost of reducing total greenhouse gas emissions by 80 percent would be $1.3 – 4.0 trillion  (with $3.3 – 6.0 trillion of required investment). Although a $5.7 trillion estimate should not be taken as an accurate assessment, it does provide a ballpark figure that is consistent with what more thorough research on the topic has produced.

There are two commonly cited analyses, though, which are used to claim that a 100 percent renewable electricity target is affordable. The first, and most notable, is by Dr. Mark Jacobson of Stanford University. In his 2015 analysis, Jacobson et al. assert that it is net beneficial to switch to 100 percent renewable electricity, and that the reason it has not happened yet is because people are “unaware” of the benefits or ease of transition. This study has since been widely debunked, as it assumes far more hydroelectric usage than is even remotely technically achievable in the United States.

Another major assessment comes from the Lappeenranta University of Technology and Energy Watch Group. The research notes that widespread adoption of storage technology, particularly lithium-ion batteries, coupled with declining costs of renewable electricity make transitioning to 100 percent renewable electricity a low-cost endeavor. This study is flawed in that it assumes a massive, nearly 90 percent, decrease in lithium-ion battery cost by 2050. This assumption is contrary to the expectation of market analysts, which is that a global shortage of cobalt will make lithium-ion batteries more expensive. From 2016 to 2017, cobalt prices increased by 117 percent, and prices are expected to continue to climb. Furthermore, because much of the world’s cobalt comes from the Democratic Republic of the Congo, batteries are often likened to “blood diamonds.” The ethical and economic problems surrounding lithium-ion batteries is spurring innovation in alternative technologies, but so far an economical solution has not been identified.

Despite the high costs of transitioning to 100 percent renewable electricity, it is not a deterrent to advocates of the policy objective. The Sunrise Movement’s proposed draft text explicitly calls for “massive spending.” The justification for such a high-cost policy comes from concern about low-probability, high-cost consequences of climate change, known as tail effects. If one believes that the tail effects are existentially threatening, then there is potentially no cost too high to prevent them.

This outlook is a poor approach to policy. Climate change is better understood as a collective action problem; no one country controls enough of global emissions to unilaterally implement a solution. Fundamentally the problem is a “prisoner’s dilemma” type of game-theory problem, where each individual participant has high incentives to betray other participants, even though the optimal outcomes require cooperation. Thus, the goal of climate policy is not to reduce emissions per se, but rather to induce reciprocity from other nations. The objective of climate policy, then, should be to convince other nations that they need to act, and domestic emissions reductions are useful primarily in being convincing to other major emitters—China, India, Russia, etc.—that actions they take to reduce emissions will be reciprocated.

Thus, an effective climate policy is not a massively expensive “renewable electricity” objective, but rather a policy that reduces the most emissions for the least cost. Such a policy signals to other actors that the United States is seriously addressing an international problem, yet does so at the lowest cost.

Have Climate Initiatives Been Efficient?

Past AAF research has demonstrated that broad regulatory mandates are not effective climate policies. When controlling for business cycles, for example, greenhouse gas regulation in the United States has only been about half as effective as claimed on paper. Further research from AAF comparing carbon taxes and regulation found that regulations cost twice as much per ton of greenhouse gas abated as a carbon tax. Similarly, The Breakthrough Institute evaluated major economies that undertook significant climate policies, and found that in almost all cases there was little to no improvement in the carbon intensity (emissions per unit of gross domestic product) of the observed economies—the economies only got smaller in response to the policy change, not cleaner. In short, lots of evidence shows that the GND’s regulate-and-spend approach to climate policy is among the least effective available.

Better climate policy must employ the advantages of dispersed choice and markets. Cleaner energy is more readily adopted when it has a market advantage over incumbents and consumers have an option for choice. Such a situation can only arise in a market that allows for choice, and broad regulatory mandates or subsidies typically reduce choice and market competition. A serious look at U.S. climate policy should not simply be seeking opportunities for regulations or subsidies, but rather consider what are the market conditions under which advanced nuclear, carbon capture and sequestration, and energy storage become competitive with incumbent energy sources.

Comparing Effectiveness of Climate Regulations and a Carbon Tax

Similar to other literature on the subject, this comparison of a carbon tax to both hypothetical future regulations and past regulations shows that a market-based…

The Costs and Benefits of Using Regulation to Achieve Climate Goals

Summary Using regulation to achieve 80 percent greenhouse gas reductions would impose costs between $588 billion and $4.5 trillion, depending on policy…

A measured policy that revises the U.S.’ pledge to be more realistically in line with the current president’s policies could be a successful means…