What you should know about the Automatic BCA Enforcement (Sequestration) Process

The Joint Select Committee on Deficit Reduction, colloquially know as the “Super Committee,” was established under the Budget Control Act (BCA), the bipartisan fiscal plan that accompanied a series of increases in the statutory debt limit. The Committee was tasked with reporting recommendations that would achieve, at a minimum, $1.2 trillion in ten-year deficit savings.  With the Super Committee having failed to produce any deficit savings, a fallback mechanism, the automatic enforcement mechanism or “sequester” (technically it is a mix of sequestration, reduced discretionary spending caps, and associated debt service savings) is now scheduled to go into effect to reduce spending by the Super Committee’s goal of $1.2 trillion.

It should be noted that the automatic enforcement mechanism was largely viewed as a “stick,” a sub-optimal policy outcome that was designed to be sufficiently odious to Congress as to induce success on a “less bad” approach achieved through the Super Committee. Both Republicans and Democrats have subsequently echoed this sentiment, and decried the automatic enforcement mechanism as bad policy. Of particular concern is the effect on the national defense, with Secretary Panetta having warned policymakers that it would be “devastating” to the military. Still further objection has been raised to the mechanism’s blunt nature, particularly in FY 2013, which would impose across the board discretionary cuts irrespective of what Congress ultimately appropriates. Such measures truly reflect austerity: indiscriminate reductions.

However, this week the House of Representatives will vote on a reconciliation measure to replace next year’s scheduled sequester. The bill includes the recommendations from 6 House Committees that would reduce direct spending outlays by $236 billion, and raise $97 billion in additional revenue over ten years, for net deficit reduction of $333 billion over ten years. The bill is designed to replace the discretionary sequester scheduled for FY2013.

The approach taken by the House of Representatives more nearly reflects the original intent of the Budget Control Act to achieve discretionary spending savings through a spending cap, complemented by more structural reforms achieved through the Super Committee. The automatic enforcement mechanism that is currently in place by default places a disproportionate burden on discretionary spending, imposing 10 percent reductions on defense appropriations and nearly 8 percent on non –defense discretionary budget authority in FY2013. Structural reforms to programs that target benefits to needy recipients while reducing fraud and out-sized program growth, as reflected in the reconciliation measure, is preferable, and more in keeping with the spirit of the BCA, than the across-the-board cuts  scheduled in current law.

January 15, 2012: This was the deadline for the enactment of any legislation originating from the” Super Committee” before precipitating the automatic enforcement process, which begins with OMB’s re-designation of the starting points for calculating the prospective sequester for discretionary spending. This re-designation sets forth two categories of discretionary budget authority: security (exclusively Function 050), and non-security (all other) for 2013-2021. OMB did so in its Final Sequestration Report for FY2012, which was released on January 18, 2012.

January 2, 2013: Absent intervening action, the Budget Control Act states that on this date, “OMB shall calculate and the President shall order a sequestration.”  This sequestration will necessitate a cancellation of previously appropriated Budget Authority, and Authority for non-exempt direct spending.  A description of the specific formula the BCA requires OMB to follow in the imposition of the sequestration follows later.

Release of OMB’s Sequestration Preview Reports for FYs2014-2021 (Accompanies President’s Budget): Pursuant to the BCA, OMB will reduce the adjusted spending categories by the amounts dictated by the formula noted above, which will serve as the discretionary spending caps for the next fiscal year. On the same date OMB will prepare and the President will order, a sequestration of non-exempt direct spending. Therefore, unlike in FY2013, for fiscal year 2014-2021, Congress will have more discretion in how funds are appropriated, since spending levels must merely meet the new caps, rather than be subjected to across the board reductions, irrespective of appropriated levels, as in FY2013.

The minimum savings that the Super Committee was required to achieve was $1.2 trillion. The automatic enforcement provision is designed to achieve any shortfall of that goal. Since the Super Committee achieved no savings, the entirety of the minimum savings goal must be achieved through the automatic enforcement process. The BCA sets forth the formula for computing and distributing these required savings:

The BCA assumes that 18 percent of the required savings will be achieved with debt service savings resulting from reductions in programmatic spending. The BCA further distributes the required savings over FY2013-2021 and requires these savings to be split evenly between defense and non-defense spending – this includes the revised discretionary categories and non-exempt direct spending. While there may be some ambiguity, the statute also appears to grant equivalency of a reduction in Budget Authority to an equal reduction in deficits.

This also essentially concludes the “knowable” understanding of how the automatic enforcement process will ultimately be executed. This is because the spending reductions fall on both the discretionary and mandatory spending associated with the defense and non-defense functions. However, much of the universe of mandatory spending is exempted by law from any reduction associated with the BCA’s automatic enforcement. These exemptions include Social Security, Medicaid, refundable tax credits and a host of other programs. The BCA also significantly limits potential cuts to Medicare. CBO estimates that about 70 percent of all mandatory spending over the 2013-2021 period would be exempt.

As noted by a Senate Budget Committee publication, in 2003, the last time a sequester could have happened, OMB’s estimate of mandatory spending subject to sequester was about half that of CBO’s. There also remains some unresolved issues regarding conflicting treatment of certain programs under law, as well as whether or not the president will invoke his authority to exempt military pay. As the BCA grants OMB the authority to make the relevant calculations for the spending reductions, until OMB makes clear determinations in these areas, any specific estimate of how the planned 2013 sequester and future spending reductions will affect certain programs is necessarily speculative.

However, the CBO did provide its own illustrative estimates for how these would be imposed. The CBO estimates of the necessary BA reductions are reproduced below. As noted above the statute appears to conflate deficit reduction and BA reduction. CBO interpreted the automatic enforcement process as requiring $1.2 trillion in total BA reductions. Accordingly, CBO’s estimate of the impact of the automatic enforcement process under the BCA assumes a $984 billion reduction in programmatic BA, rather than outlays. CBO also estimates that the sequestration process would also result in an offsetting increase in outlays of $31 billion. CBO’s estimates of the associated debt service savings are also smaller than 18 percent. Accordingly, CBO’s estimate of a $1.2 trillion BA reduction consistent with the BCA would reduce the deficit by $1.057 trillion. The CBO’s BA estimates follow: 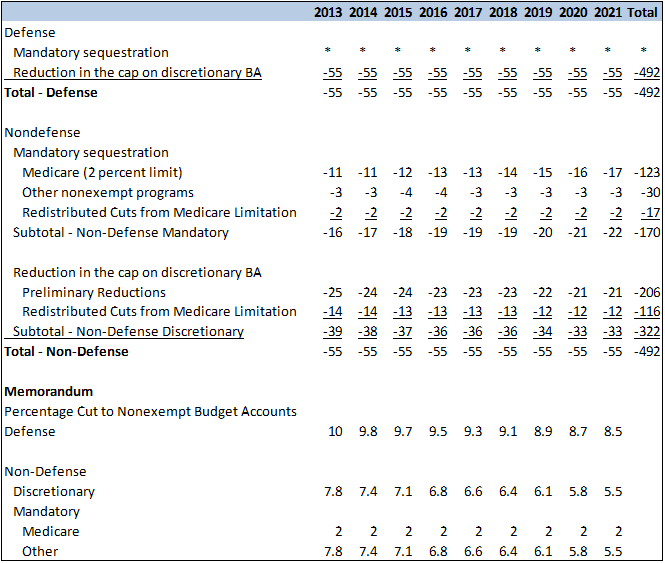 Over the past 25 years, food insecurity was highest in the years immediately following the 2008 financial crisis but had been steadily declining since…