Build Back Better is dead and whatever arises from its grave isn’t going to involve health care. Prescription drug price setting – excuse me, “negotiation” – has zero chance of passing through the Senate. Of course, some things can be addressed without Congress. Recently, the Biden Administration announced that it, through the power of the almighty pen and phone, would take executive action on several fronts to help alleviate the pain some Americans feel from medical debt. Before we get into that, however, let’s look at the problem of medical debt in the United States.

Medical bills are widely cited as a leading cause of bankruptcy in the United States – although the data aren’t always clear cut. Depending on the survey, medical debt contributes to, or is the direct cause of, anywhere between over a quarter and more than 62 percent of bankruptcies. Differing definitions are to blame for the wide range – there’s no requirement to state the cause of a bankruptcy declaration, so we must rely on surveys. A Harvard studypublished in 2005 (and co-authored by now-Senator Warren) found that 46.2 percent of those surveyed in 2001 cited medical expenses as the reason for their bankruptcy. The same authors in 2009 found that 62.1 percent of early-2007 bankruptcies were caused by medical bills. A 2011 study found that out-of-pocket medical costs contributed to 26 percent of bankruptcies for low-income adults between 1992-2004, and another found that 18-26 percent of bankruptcies in 2013 were caused by medical bills. A 2015 Kaiser Family Foundation study found that 1 million adults declared bankruptcy due to medical costs. So, the numbers are all over the place, but what is clear is that a large group of Americans face financial difficulty and potential bankruptcy as a result of medical debt.

Caution should be applied before making sweeping conclusions about these results, however. To paraphrase one study’s author: Bankruptcy doesn’t normally have just one cause, and a multitude of factors plays into a person’s decision to declare bankruptcy. Importantly, as bad as the above data sound, the average American isn’t saddled with a large amount of medical debt. Citing the Consumer Financial Protection Bureau (CFPB) and several other studies, Benedic Ippolito at the American Enterprise Institute testified that the median level of medical debt in the United States is only slightly above $300 and only 16-18 percent of credit reports include medical collections – although they represent a majority of all collection tradelines on consumer credit profiles. People with new medical debt are most likely to be in their 20s – this age group has higher rates of uninsured and lacks more comprehensive (more expensive) coverage.

So, what will the Biden Administration do? Unlike its ill-conceived and regressive student loan deferral policy, it will not be deferring medical debt payments. Instead, the administration will be telling all agencies to “eliminate medical debt as a factor for underwriting in credit programs.” As part of this policy, medical debt will no longer affect loan applications to Department of Agriculture rural housing services, the Department of Veterans Affairs (VA) will no longer be reporting medical debt for veterans, the Small Business Administration is reviewing ways to reduce the burden of medical debt on business owners, and the Federal Housing Finance Agency is reviewing its credit models at Fannie Mae and Freddie Mac. Additionally, the VA will make it easier for veterans to apply for medical debt forgiveness and simplify income thresholds for said forgiveness. Separately, the administration also plans to hold providers accountable for potentially illegal collection tactics – a response to recent revelations that lawsuits over unpaid hospital bills have spiked in the last decade. The Department of Health and Human Services will evaluate providers’ billing practices and their impacts on health care access, making the data and evaluations public, and weighing that information when it comes to awarding grants to hospital systems.Finally, the CFPB will investigate credit reporting companies and debt collectors and educate consumers on their rights surrounding medical debt.

Will this initiative fix our medical debt issue? Not really. Most unpaid medical debt is no longer reported after seven months of first appearing on a credit report. And studies have shown that reductions in medical collections do not lead to improved outcomes in other measures of financial health, including credit scores. All that said, this initiative will push federal policies closer to recent private sector moves by the big three credit agencies to no longer report most medical debt starting in 2023. Now, this may have knock-on effects: Creditors may begin to weigh other measures of creditworthiness more heavily, which could have different consumer consequences. But, generally speaking, most financial institutions seem to have already reached the conclusion the federal government just did: Medical debt isn’t a major sign of creditworthiness. This executive action doesn’t lower health costs and probably won’t prevent any bankruptcies, but it is a rare good-governance action from this administration, and for that the president should be commended.

Recent research from the American Action Forum detailed the cost of insulin from the 1990s through 2020, based on data from the Centers for Medicare and Medicaid Services. Growth in insulin prices has been accelerating since 1991, with a reprieve only in recent years. The list price of insulin per milliliter in the United States increased, on average, 2.9 percentannually from 1991-2001, 9.5 percent annually from 2002-2012, 20.7 percent annually from 2012-2016, and 1.5 percentannually from 2016-2018. New data show that this slower growth turned into broad price reductions for the first time in 2020 for all insulin types except newer ultra-long-acting insulins, as shown in the chart below. The average price across all insulin products fell 6.2 percent from 2018-2020; however, average prices per unit are still double what they were in 2012. Of note, the data are for list prices and do not account for rebates, which are generally known to be quite large in the insulin market. 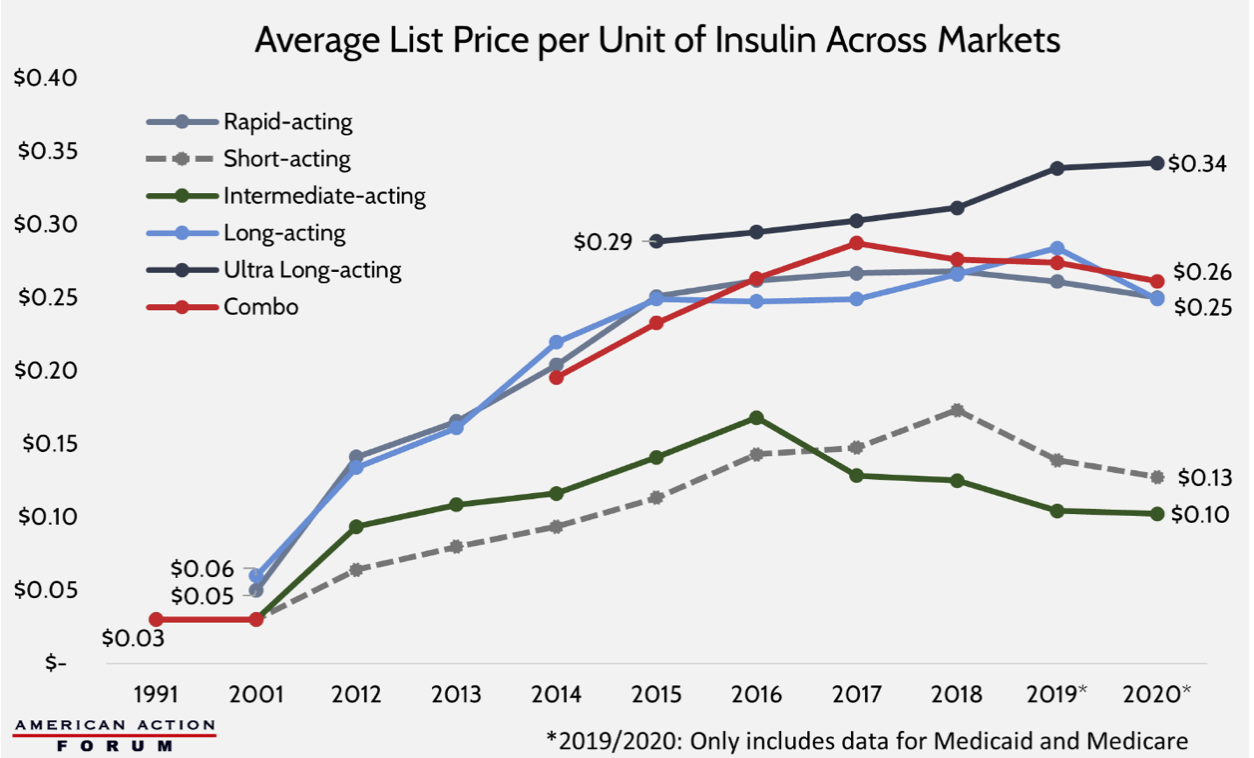 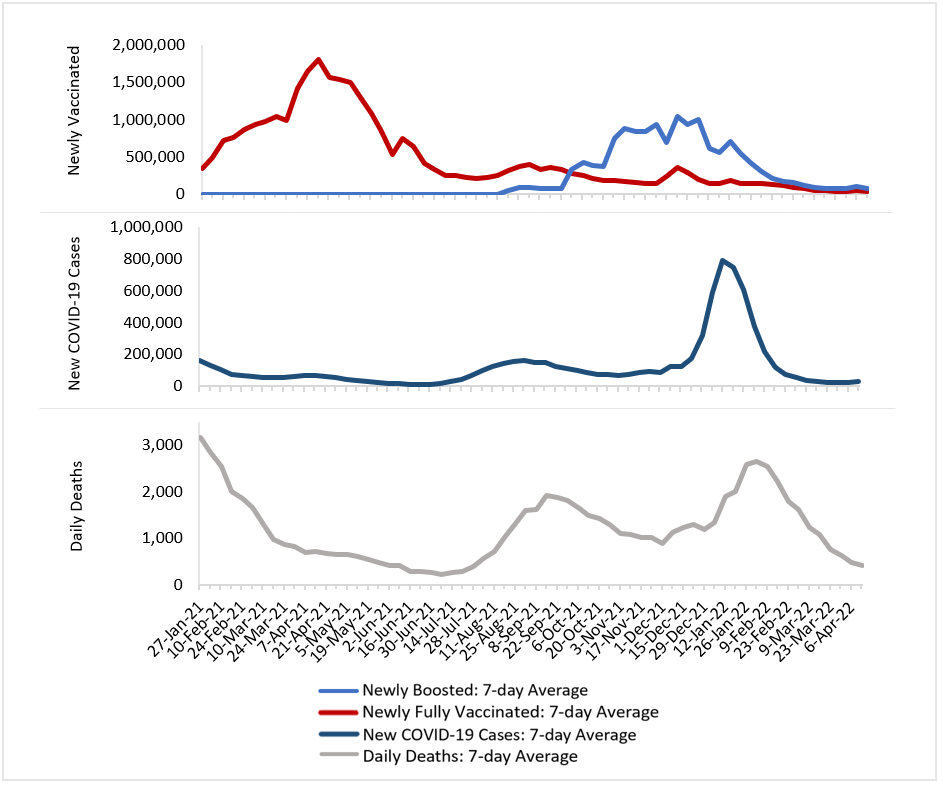