Should We Celebrate Medicaid’s Record Enrollment?

This week the Department of Health and Human Services (HHS) trumpeted the news that combined enrollment in Medicaid and the Children’s Health Insurance Program (CHIP) grew by 13.9 percent during the COVID-19 pandemic. The Biden Administration’s reaction to the report can best be described as celebratory, but it’s worth considering whether it’s a good thing that the combined programs—intended to provide safety net coverage to the most vulnerable of Americans—now cover 1 in every 4 U.S. residents.

Programs such as Medicaid and CHIP are designed to be countercyclical, so when the economy crashes—because of, say, a global pandemic—enrollment should increase. As economic conditions worsen—leading to higher unemployment, lower incomes, and loss of health insurance coverage—enrollment in Medicaid and CHIP should increase. The increase in enrollment by nearly 10 million people during the pandemic is an indication that the programs are, at least in this respect, working correctly. Some level of back patting by the administration is probably appropriate. At the same time, however, the fact that Medicaid and CHIP enrollment are at all-time highs is not something to celebrate; rather, it’s indicative of the serious economic distress the country has undergone. And particularly concerning is that Medicaid enrollment continues to increase month over month, even as the economy makes slow progress toward recovery.

Part of the reason that enrollment grew, and remains, so high is that Congress mandated states suspend what are normally their ongoing efforts to ensure only those eligible for the programs are enrolled. As part of the Families First Coronavirus Response Act—enacted in March 2020—Congress authorized a 6.2 percent bump in the federal share of Medicaid costs, but in exchange states had to suspend eligibility determinations for the duration of the public health emergency. What that means is that by the time the public health emergency order is lifted, states will have gone up to two years without purging their Medicaid and CHIP rolls of ineligible beneficiaries—a potential factor in enrollment remaining at record levels even as the economy begins to improve.

Bizarrely, the Biden Administration and some advocates see the record level Medicaid enrollment as a good thing and appear to be focused on maintaining these higher levels regardless of economic conditions. The administration is working on a series of regulatory proposals aimed at expanding Medicaid coverage to new populations, including prisoners and undocumented immigrants, and potentially expanding the kinds of service covered beyond health care to food and even housing. In Congress, several different legislative efforts are underway seeking to expand Medicaid eligibility to those with income above the federal poverty level in states that have declined to expand their Medicaid programs, as the Affordable Care Act allows. The administration is also working to revise the rules around determining Medicaid eligibility under normal circumstances, likely to minimize the number of people who are removed from the rolls.

All told the Biden Administration and its allies in Congress appear to see increasing Medicaid and CHIP enrollment as the goal regardless of economic conditions. In effect, they are trying to expand federally run health care programs to new populations. But Medicaid was never intended to be a primary source of health coverage for more than a sliver of Americans. Its purpose was to provide for the most vulnerable when they were most in need. Increasingly those on the left see Medicaid and CHIP less as safety net programs and more as Trojan horses for expanding the federal role in health care, potentially distracting focus and redirecting resources from the very populations the programs are supposed to serve.

We can debate whether the problem is mission creep on the part of the programs, or perhaps factors related to income inequality, or any other host of issues or combination thereof. But there is something wrong when safety net programs designed to cover the poorest and most vulnerable grow to cover 80 million people, or nearly 25 percent of the U.S. population.

In an effort to bolster COVID-19 vaccination rates, a number of states have started giving away money and other prizes to those who are vaccinated. On May 13, Ohio became the first state to offer such incentives when the state announced its Vax-a-Million lottery system that would reward one vaccinated adult with a $1 million prize each week for five weeks. Other states have begun to follow suit, such as Oregon, where a similar lottery system has been set up under the “Take Your Shot, Oregon” campaign. Minnesota has taken a different approach through its “Your Shot to Summer” program, which offers all vaccinated Minnesotans a variety of reward options including fishing licenses, state park passes, and amusement park tickets. As the graph below shows, the effects of these vaccination campaigns have been mixed. While Ohio saw a sharp rise in vaccinations following its lottery announcement, Oregon’s lottery appears to have done little to increase vaccination rates, as the state saw a spike when Ohio announced its lottery program but no similar spike when it announced its own. Minnesota’s prizes allow any vaccinated person to get something, which may be why daily vaccination rates have continued to gradually rise since the program launched, in contrast to the unsustained spikes in Oregon and Ohio. But even Minnesota’s success will likely not continue indefinitely as the number of people willing to get vaccinated declines. 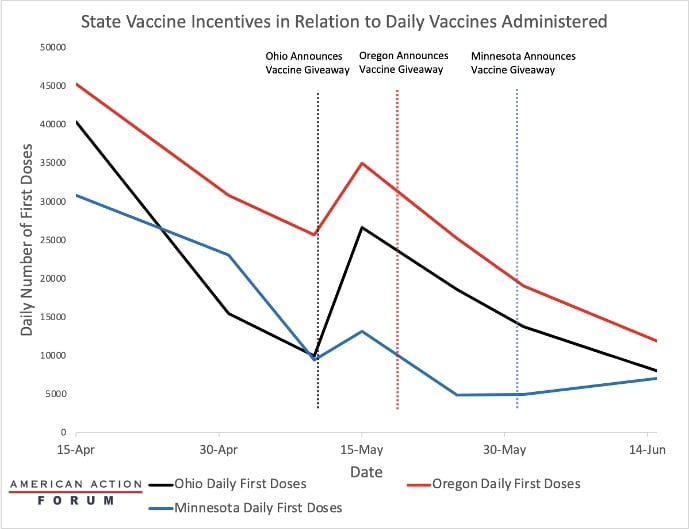