As Congress turns its attention toward (failing to enact) other parts of President Biden’s agenda, the Build Back Better Act (BBBA) appears to be dead in the water. The grab bag of social spending and government regulations that make up the BBBA, however, will be a well to which progressives will return time and again. After all, many of these proposals have garnered the (sometimes reluctant) support of all 50 Democratic senators. With that in mind, AAF President Doug Holtz-Eakin and I took another look at the BBBA’s drug pricing provisions this week and concluded they would be a disaster for medical innovation, patient access, and the economy.

Prescription drug spending—both retail and physician administered—is less than 15 percent of total health care spending, but partly because of the increasing prevalence of coinsurance and large insurance deductibles, patients’ experience the cost of drugs directly. As a result, there is a bipartisan will to address drug prices. But while conservatives have sought to promote choice and competition, progressives have targeted drugmakers’ profits. The BBBA contains a number ofreckless drug-related policies, such as Medicare “negotiation” of drug prices and inflation penalties, alongsidesome promising reforms to Medicare Part D. Holtz-Eakin and I take on each of these in turn in our paper.

First, the BBBA would establish an explicit government price-setting regime for pharmaceuticals, reaching into all corners of the health system. Despite supporters’ claims, the legislation does not establish a true “negotiation” of drug prices in Medicare; rather it would empower the secretary of Health and Human Services to dictate prices to manufacturers—that is, through the threat of a punitive 95 percent excise tax on gross profits of therapies whose manufacturers do not agree to the secretary’s demands. There would be a ceiling price for the “negotiation,” but no floor price below which the secretary would be unable to force further concessions. The BBBA would also cap the price of all drugs throughout the entire health care system for the first time by prohibiting any drug’s price from increasing faster than the rate of inflation.

These proposals would harm patients through reduced innovation and higher launch prices. One recent study found that the BBBA would result in 135 fewer new drug approvals, 188 fewer new indications for existing therapies, and a reduction of 331.5 million life years among patients through 2039. The combination of price setting and inflation penalties would also threaten generic and biosimilar market entry, putting at risk potential savings and improved treatment options for millions of Americans.

Also underappreciated are the potential economic impacts of these policies. The BBBA could reduce biopharmaceutical industry revenue by $2.9 trillion through 2039, putting at risk a U.S. biopharmaceutical sector that generates more than $1 trillion in economic activity annually, employs more than 800,000 workers, and supports more than 4 million jobs across the U.S. economy. In the mid-1980s, as stringent price controls were imposed, Europe saw a flight of investment in drug development and manufacturing to the United States. Under the BBBA, the United States would risk a similar loss in competitiveness to countries such as India and China.

The BBBA poses a serious threat posed to medical innovation, patient health, and American competitiveness. While thebipartisan reforms to the Medicare Part D program are worth pursing, policymakers would do well to discard the rest of the BBBA’s terrible, no good, very bad drug policies.

According to the Bureau of Labor Statistics’ most recent Consumer Price Index report, health care prices have grown significantly slower than economy-wide prices over the last year. Over the last 12 months, the Consumer Price Index for All Urban Consumers (CPI-U) jumped 7 percent, while the price indices across health care and medical services increased about 2 percent on average, consistent with the change in previous years. Across all health care and medical services, medical equipment prices grew the most since December 2020 with a 5.9 percent increase, while both health insurance and care of invalids and elderly at home saw price decreases over the last year, at 1.2 and 2.0 percent, respectively. Notably, the price index for prescription drugs was unchanged from December 2020 to December 2021. Health care prices have historically moved in tandem with price trends in the overall economy over the last decade; however, prices for health care services are negotiated and set in advance for the entire year, which creates a delay between when inflationary pressures such as supply costs or labor shortages first appear and when they are actually felt through price increases in the health care sector. As a result, some policy experts predict that higher health care prices, such as increased insurance premiums and out-of-pocket expenses, are likely to follow last year’s rapid rise in inflation. 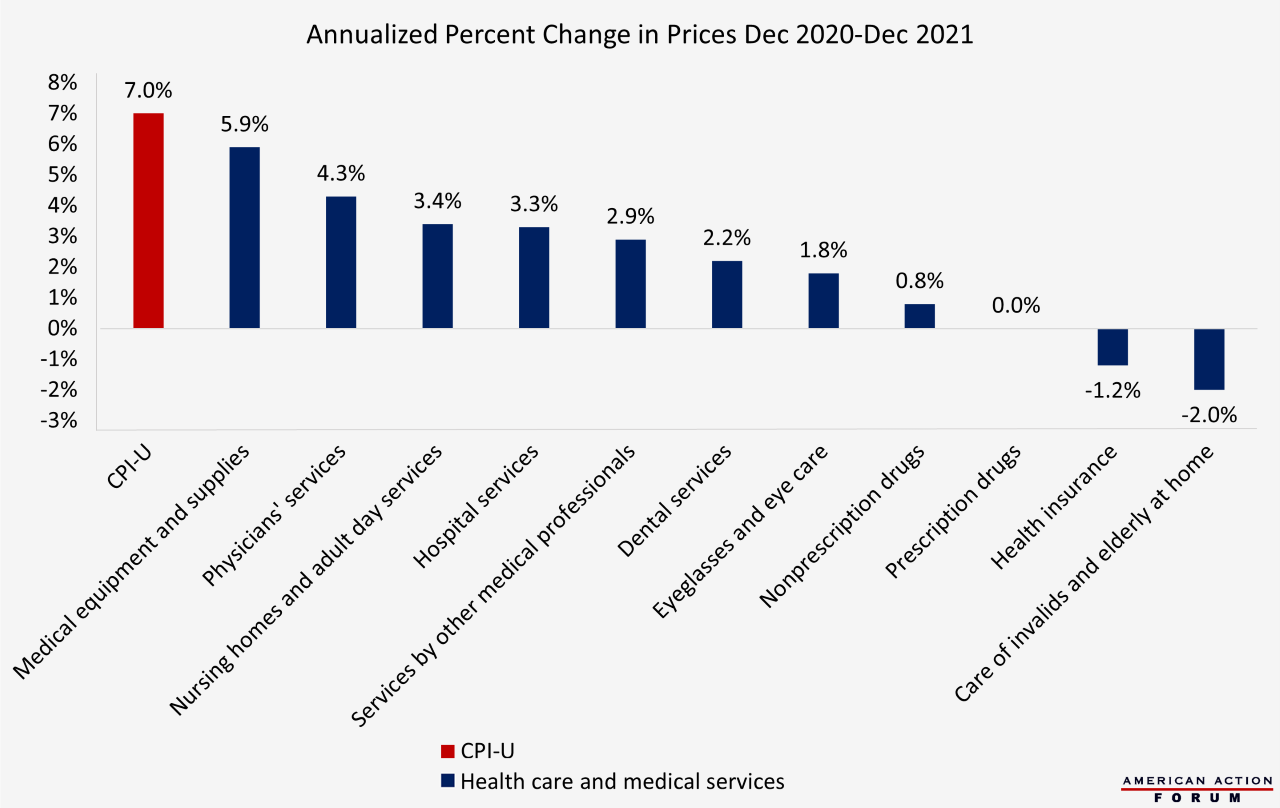 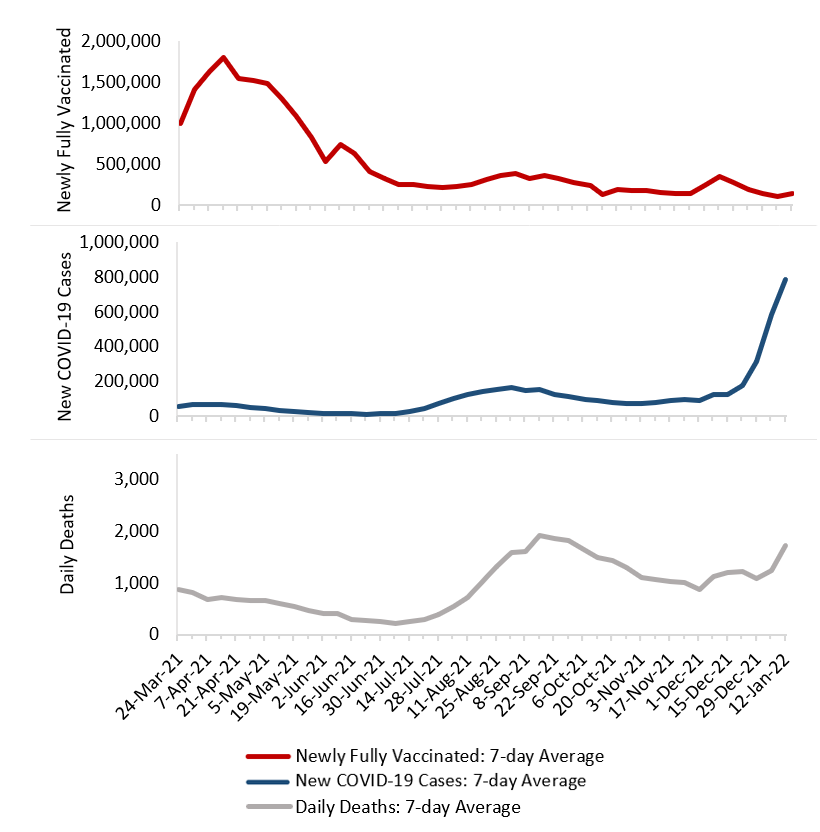