The systems of mental health available in America today are incomplete, complex, and counterintuitive. Attempting to trace the paths to gaining mental health care in America is difficult, even for an individual who is not in the midst of a mental health crisis. The resulting gaps in care can cause unnecessarily tragic outcomes, yet finding ways to fill those gaps poses financial and political obstacles that will be difficult to overcome.

What Happens When Mental Health Services Are Needed

When an adult first presents with symptoms of severe mental illness, there is no way to predict what the long-term outcome will be. It is illegal for an independent adult to be forcibly institutionalized when there is no immediate danger posed to himself or others. Even when such an immediate danger is present, there is no guarantee that space will be available in an institution to admit the individual as a patient. Should space be available, there remains the often insurmountable obstacle of how this inpatient mental health care will be paid for[1]. In the absence of appropriate mental health care, an ill individual faces a significantly increased risk of job loss, homelessness, involvement with the criminal justice system, Emergency Room (ER) boarding, co-morbidities, substance abuse, suicide and violence against self or others.

Typically, patients experiencing a severe mental crisis end up either in a psychiatric hospital, hospital psychiatric ward, hospital ER, outpatient clinic, or, most frequently, without care. Unfortunately, because of the high number of barriers to care, over 40 percent of Americans with severe mental illness go entirely without care each year.[2] 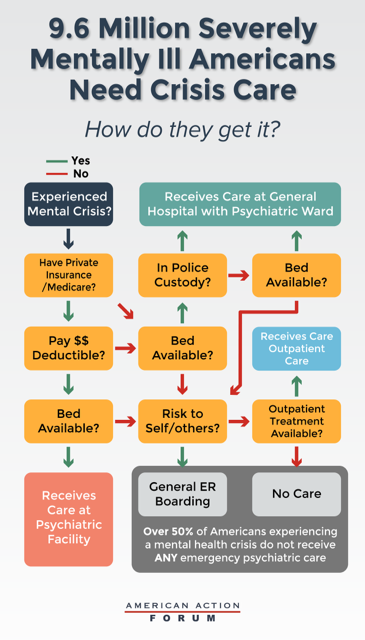 Where Care May Be Provided

Since the implementation of the Institutions for Mental Disease (IMD) Medicaid payment exclusion as part of the Social Security Amendments of 1965, funds that states had invested in running psychiatric institutions were drawn into the Medicaid program, but were prohibited from being paid out for services provided by IMDs. Without the ability to receive payment for care provided to Medicaid beneficiaries, American IMDs began closing their doors, and every time there is an economic downturn, these facilities are often the first to be cut. In 2012 alone, 10 percent of the nation’s psychiatric beds were eliminated.[4] Those that remain open are often extremely expensive and are funded primarily by private insurance payments, high out of pocket costs, and charitable giving in addition to what minimal state funds are available.

Similar to psychiatric hospitals, psychiatric wards in hospitals are often the best option available to patients in the midst of a crisis. Since the IMD exclusion does not allow for Medicaid to pay for any health services provided to mentally ill individuals (including those suffering from substance abuse disorders) in IMD facilities, hospitals with psychiatric wards are especially careful to avoid becoming labeled as IMDs.[5] They often do this by maintaining small wards of under 16 beds – the statutory maximum for non-IMD facilities providing mental health care. This de facto bed cap limits patients’ access to psychiatric wards by putting providers under pressure to avoid the IMD exclusion and preserve Medicaid eligibility.

Hospital ERs are often the option of last resort when an individual suffering a mental health crisis is unable to find a bed at either a psychiatric hospital or ward. ERs are often unequipped to provide mental health services and most ER doctors and nurses have had, at best, a few hours of training in how to handle psychiatric patients.[6]. More often than not patients will need to wait for an on-call specialist to arrive and provide a diagnosis. A diagnosis does not, however, guarantee that the patient will be admitted.[7]

When a mental health emergency presents in the form of imminent danger to the patient or others, and no psychiatric beds are available, a patient may be temporarily held in a hospital for a given time period (depending on the state) or until the danger has passed.[8] Typically, a patient will be held for a minimum of 48 hours, but if the danger persists a patient may be held in an ER waiting room, restrained and medicated (with or without consent) for days or weeks until a psychiatric bed becomes available. This practice, known as ER boarding, offers individuals no treatment for their disease, yet incurs significant ER expenses and occupies ER beds and other resources that could be better used to provide treatment to others.[9]

Outpatient treatment may be provided either voluntarily or through an Assisted Outpatient Treatment (AOT) program. Outpatient care is only appropriate for patients not currently experiencing a mental health crisis, but may be utilized to help prevent such crises from occurring. If an individual has been involved in a crime, or has been found by a court to be unwilling or unable to continue treatments necessary for public safety, AOT may be court mandated. AOT has been shown to contribute to significantly reduce adverse outcomes such as job loss, homelessness, recidivism, etc. Unfortunately, over one-half of U.S. counties have no qualified health providers available to provide these services.

When Care Is Not Provided

In 2012, 9.6 million Americans suffered from mental illness, yet nationally only 108,000 psychiatric beds were available[11]. About one-third of these beds were reserved for ‘forensic’ patients—mentally ill criminal defendants who have not yet stood trial, or sex offenders who have completed their sentence but are not mentally stable enough to be released.[12] Each year about 44 percent of Americans receiving disability insurance because they are unable to retain employment report suffering from mental illness. Each year 200,000 mentally ill individuals become homeless. Predominantly non-violent crimes, such as causing a public disturbance, result in about 2 million arrests, and the long-term imprisonment of 356,000 mentally ill individuals.[13] And each year, 34,000 untreated Americans suffering from mental illness commit suicide.[14]

All told, the foregoing risk factors, combined with an inability to manage co-morbidities have reduced the life expectancy for patients with mental illness in America by 23 years.[15]