A Regulatory Flurry: The Year in Regulation, 2013

This year regulators published $112 billion in net regulatory costs, including deregulatory measures. They added 157.9 million paperwork burden hours, according to the daily tally from the Office of Information and Regulatory Affairs (OIRA). At the beginning of 2013, the American Action Forum predicted $123 billion in regulatory costs, or 8 percent from the actual figure.

From 2009 to 2013, regulators have published $494 billion in final rules. This figure dwarfs the Gross Domestic Product (GDP) from countries like Sweden, Peru, and Ireland. With more than $87.6 billion in proposed rule costs this year, burdens will continue to increase in 2014. 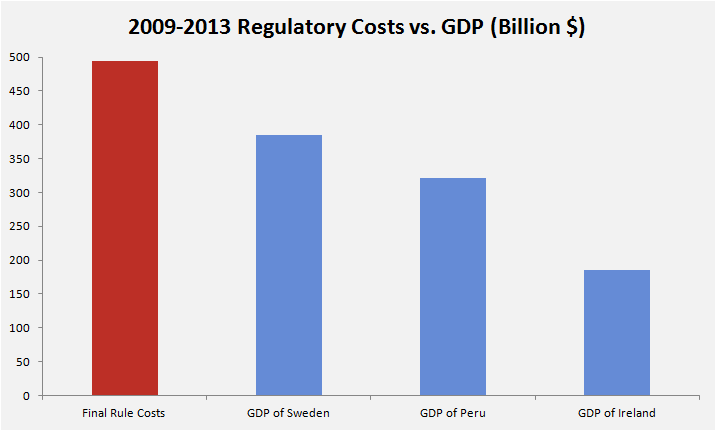 Because of a politically motivated regulatory delay in 2012 before Election Day, the White House released several significant measures in 2013. Two big regulations drove costs for the year (Tier 3 emissions standards and efficiency standards for motors), but the overall activity was down compared to other years under President Obama.

Despite publishing 80,462 pages of regulation in the Federal Register, a rise from 2012, this past year did not break records. In 2010, the administration released 100 “major” regulations, the highest ever. This compares to 77 major rules in 2013.

Below are the top five proposed and final regulations published in 2013. 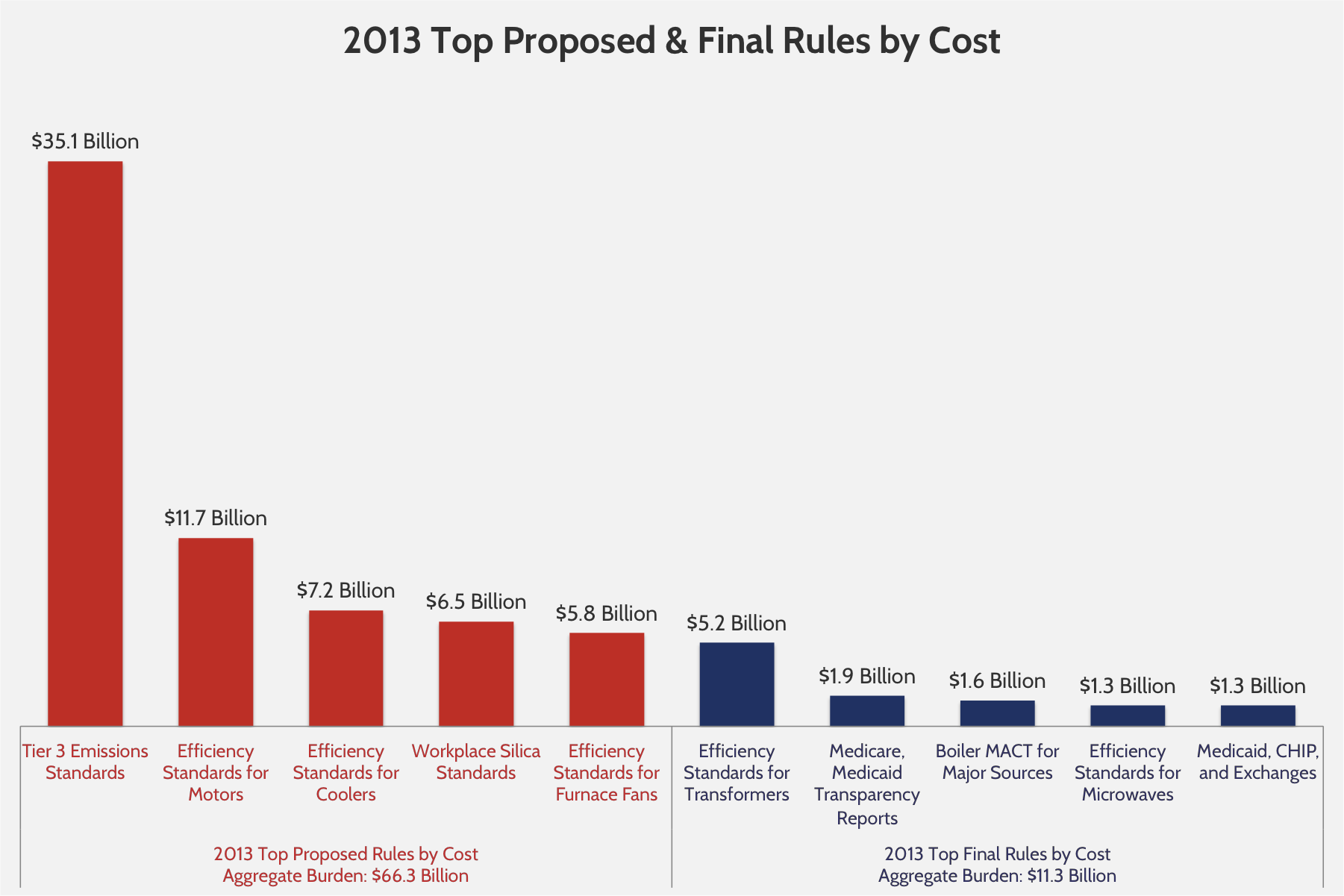 Not surprisingly, EPA, the Department of Energy (DOE), and health care rulemakings dominate. EPA’s Tier 3 emissions standard easily led the year and would add $3.4 billion in annual costs, more than 160,000 annual paperwork burden hours, with total costs topping $35 billion. The proposed measure would reduce the sulfur content in gasoline by two thirds. The White House singled-out this regulation for delay in 2012, as staffers disclosed reservations about the cost and the likelihood of higher gas prices. The White House now plans to finalize the Tier 3 standards in February.

DOE was also busy last year, and with the higher figure for social cost of carbon, it is much easier to justify expensive new energy efficiency standards. The agency published $34.5 billion in regulatory burdens. Its priciest was a proposed rule imposing standards for commercial and industrial electric motors. It would add $11.7 billion in long-term costs ($462 million annualized) and force some small manufacturers to spend 188 percent of their annual capital expenditures on compliance.

HHS’s two largest rules, transparency reports for Medicare and Medicaid and a final exchange rule, added more than $3.2 billion in new costs. The transparency report rule requires drug and medical supply manufacturers to report payments and gifts to physicians and teaching hospitals. Although the costs of the rule are significant, the administration conceded, “We have no empirical ability to estimate the monetary benefits of this provision.”

The final exchange rule would impose $1.3 billion in annual costs and more than 55,000 paperwork burden hours. It outlines the criteria for the verification of enrollment in exchanges, and according to the regulatory text, provides “a more efficient shopping experience.”

Finally, Dodd-Frank implementation added significant burdens in 2013 as well. Regulators published $1.1 billion in costs and added 3.9 million paperwork burden hours. Five different regulators released the final version of the “Volcker Rule,” a general ban on proprietary trading. However, regulators did not formally publish it in the Federal Register in 2013 and AAF omitted the rule from these totals.

Below are the top five proposed and final regulations for new paperwork in 2013. 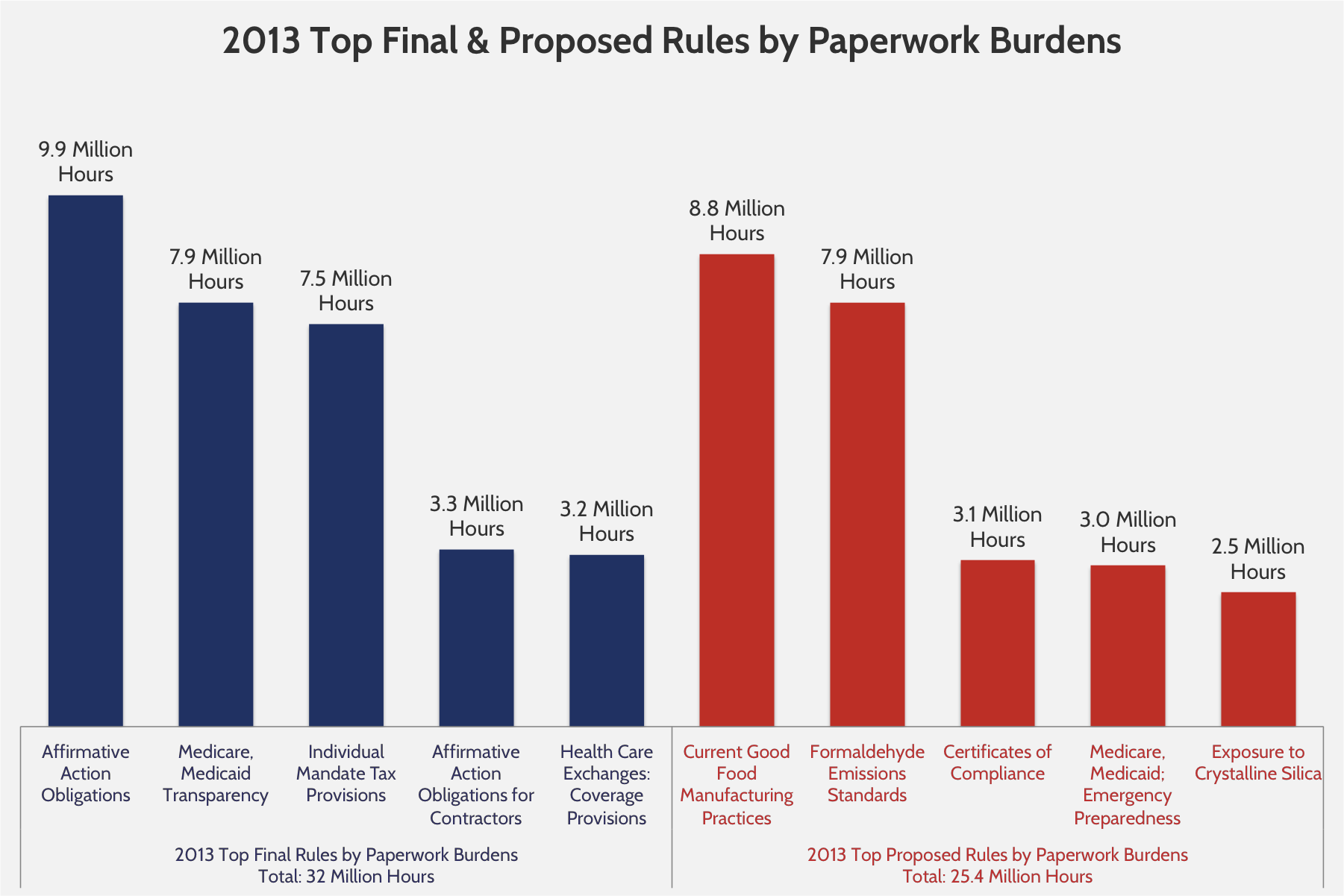 The largest new burden resulted from an obscure rule imposing affirmative action and nondiscrimination obligations on contractors. It would add 9.9 million paperwork burden hours and more than $800 million in total costs.

There were also several new provisions dedicated to implementing the ACA. Perhaps the most notable is the IRS’s individual mandate tax. According to the administration’s back-of-the-envelope calculations, the new requirement on tax forms would add 7.5 million burden hours.

There was a proposed IRS measure that could drastically add to the nation’s paperwork burden, but it was omitted from the figures above. The IRS recalculated the burden of filling out corporate tax forms: the figures will jump from $0 in quantified costs and 362 million hours to $48.5 billion and 2.8 billion hours. If OIRA approves the proposal, the nation’s hourly burden will rise to 12.8 billion hours, by far the highest ever recorded.

Finally, the National Credit Union Administration (NCUA) gave a few regulated entities a scare when it proposed to add 43.4 billion hours of new paperwork. AAF initially thought this was a typo, but then the notice appeared again, and then it arrived at OIRA. After AAF formally commented on the proposal, noting 43 billion new hours could impose roughly $1.3 trillion in annual costs, NCUA issued a formal correction. The actual figure was 9.9 million hours, not 43.4 billion. However, once the revision is final, NCUA’s paperwork burden will increase 30-fold.

For the year, AAF recorded $87 billion in annualized benefits (7 percent discount rate), and the vast majority came from EPA and DOE. For example, DOE efficiency standards could generate $10.2 billion in annualized benefits, mainly from energy savings and reduced greenhouse gas emissions. DOE’s most beneficial and perhaps most controversial regulation, new efficiency standards for microwaves, would reportedly add $3.5 billion in benefits. That regulation contained the administration’s revised social cost of carbon, which several groups later challenged. On December 31, 2013, DOE formally rejected a petition from the Landmark Legal Foundation to reconsider the rule and its estimate for the social cost of carbon.

The Department of Transportation (DOT) published a surprising proposal that would generate $12.8 billion in benefits, reduce costs by $1.7 billion, and cut 46.6 million hours of paperwork, or 15 percent of the department’s total. The proposal would remove the requirement to file a report after every trucking trip, even if there is no incident, and instead require reports only for “defect” trips.

Finally, there were other significant deregulatory measures AAF recorded in 2013 that were not reported as benefits, but reduced costs and hours. Combined deregulatory measures for 2013 topped $6 billion, led by a proposal from the administration to reduce Medicare and Medicaid burdens on hospitals ($3.2 billion) and a Consumer Financial Protection Bureau rule that would integrate existing paperwork (saving 8.4 million hours).  However, the former did not reduce any reporting burdens and the latter will result in $275 million in annualized burdens.

It is important to note that despite these significant cuts to costs and paperwork burdens, net regulatory costs increased by $112 billion and the cumulative paperwork burden continued to climb.

AAF compiled thousands of cost-benefit figures in 2013, but these figures are just estimates; some contend that the actual costs and benefits can vary greatly. There is some academic literature on the accuracy of cost-benefit calculations, but given the volume of annual rulemaking, there isn’t enough data to confirm that agency estimates are either widely exaggerated or underestimated.

To move past initial government estimates, AAF once again examined 10-k annual reports from 30 large companies. This list includes a mix of industries, including (in descending order): finance, energy, manufacturing, and health care.

These data are limited by what companies report in their financial statements. Although a company might note $125 million to comply with federal environmental regulation, that company might spend far more complying with financial, health care, and labor rules. The figures of $30 billion and 1.9 percent of market capitalization should be viewed as floors for these companies, not ceilings. Even if regulatory costs consumed just 1.9 percent of company market capitalization, applied to the Dow 30, its regulatory spending would top $91.2 billion annually.

During the year, AAF also tracked where regulations will be codified in the Code of Federal Regulations (CFR). The CFR is organized into 50 titles, with each title corresponding to an industry or part of government. These data help to determine which sectors of the economy receive the highest number and the most significant regulatory actions.

Regulation by Industry in 2013

As noted above, Energy (Title 10) and Environment (Title 40) received the highest cost impacts. Given the expensive rulemakings from DOE and EPA, this is hardly a surprise. Combined, Public Health (Title 42) and Food and Drugs (Title 21), received $16 billion in new costs and more than 25.7 million paperwork burden hours. This is mainly the result of ACA implementation in 2013. Finally, Banking (Title 12) and Commodities and Securities (Title 17) added almost $4 billion in costs and 11.1 million hours. Not surprisingly, Dodd-Frank implementation drove many of these new burdens in the financial sector.

Adding more than $112 billion in new burdens is a stark reminder that current attempts to reduce regulatory costs are wanton. With more than $87 billion in proposed rules in 2013, likely to be finalized in 2014, burdens will continue to escalate. The final implementation push of Dodd-Frank and the ACA, and the first attempt to regulate greenhouse gas emissions from existing stationary sources will only add to the nation’s cumulative regulatory tally.

Looking forward to 2014, AAF has already predicted $143 billion in possible regulatory costs. But that figure is entirely dependent on OIRA and how quickly it speeds rules through the review process. If Election Day politics enter the fray, expect this number to be far lower. However, if the White House sees its final three years in office as an opportunity to cement its regulatory legacy, expect no slowdown in the number of significant new rules.

Beginning in 2011, AAF began tracking every proposed and final regulation that appeared in the Federal Register. Every regulation that imposes a private-sector, intergovernmental cost, or paperwork burden is recorded and each rulemaking is tracked during the year. Any quantified deregulatory measures were also included. All proposed and final rule costs are logged daily and listed on AAF’s website.