This year we’ll close the first decade of the fracking revolution, which inverted long-standing trends in energy production and turned the United States into the largest oil and gas producer in the world. As new trade opportunities open up, energy prices drop, and OPEC desperately tries to hold its market share, federal energy policy must be updated to reflect this new reality. Unfortunately, the administration is tethering us to the past.

Our oil and gas policies were largely written in the 1970s during a period of scarce energy resources and high prices. These policies were designed to isolate the U.S. market from oil price shocks, resist foreign sources of oil, and ensure we preserve scarce oil and gas reserves for our future and our national defense. Today, none of these policies work well; oil and gas production is collapsing the trade deficit, we’re in a position to export our resources to key international partners, and advances in drilling technology have opened up access to major shale and tight oil. It’s time to develop a policy that makes sense today.

To realize a pro-growth energy strategy, the first step is land use policy that provides access to relevant resources. This paper focuses on policies that provide for or limit access to the oil and gas resources that have been driving economic growth.

The federal government owns 28 percent of U.S. lands. The vast majority is managed by four agencies (the Forest Service in the Department of Agriculture and the National Park Service, Bureau of Land Management (BLM), and Fish and Wildlife Service in the Department of the Interior) for the purposes of preservation, conservation, resource development, and recreation. To allocate acreage across purposes, agencies use a lengthy and comprehensive land use planning process that involves all levels of government, the public, and stakeholder groups, and ensures compliance with the National Environmental Policy Act.

Once purposes for the lands have been established, land management agencies can begin the process of leasing acreage for the purpose of oil and gas development. Once a developer acquires leasing rights, it then applies for drilling permits to access resources on these lands. Major issues arise along all steps in this process.

With the 2000 Energy Policy and Conservation Act (EPCA) and the Energy Policy Act of 2005 (EPAct 2005), Congress directed the Secretary of the Interior to create an inventory of oil and natural gas resources on federal on-shore lands and to determine the restrictions inhibiting resource development. The Departments of Interior, Agriculture, and Energy relied on 18 sample geologic provinces to assess not just our natural resources, but also the bureaucratic obstacles to bring those resources to market.

The findings of the 2008 report, Inventory of Onshore Federal Oil and Natural Gas Resources and Restrictions to their Development (Inventory), are dismal. Federal policies restrict access to the majority of federal land and oil reserves. It’s not just the energy industry that is held back by restricted production. Lease and royalty payments generate about $15 billion dollars in federal revenue each year, revenue that is used to execute our resource conservation policy and manage public resources. Refer to Table 1 for a high-level summary of Inventory findings.

Let’s begin with the acreage most open to development – lands accessible under standard lease terms. The lease is a straightforward, four page document that outlines blanket lease terms, like rental and royalty rates and operational requirements. If the land use planning process does not yield any additional considerations, the lessee must comply with the numerous environmental, conservation, and cultural requirements imposed by the standard lease under a variety of federal statutes. Lands with these basic requirements account for less than one tenth of federal oil and gas resources.

Federal lands open to restricted lease conditions can come with a number of caveats over a broad scale. Some restrictions may be relatively minor operationally, like additional safeguards for local cultural landmarks or practices. Others can be quite arduous, like development windows restricted to less than three months to protect endangered species or fragile environments. Of the 125 land use plans sampled in the Inventory, land management agencies heaped on 3,125 individual lease stipulations. Leases under these plans had an additional 157 unique conditions of approval. These lands, accessible to varying degrees, account for 30 percent of all oil resources and nearly half of natural gas resources.

Finally, there are lands that are closed to development. These lands may be closed by congressional or executive action or administrative decisions by the land management agency, if they have not yet undergone the land use planning process, or because government owns only mineral, but not land surface rights. Together, these categories render inaccessible more than 62 percent of federal oil reserves and 41 percent of federal natural gas reserves.

It comes as no surprise that the energy boom has been most prolific in states with relatively minor shares of federal ownership, including Texas (1.8 percent), North Dakota (3.9 percent), and Pennsylvania (2.1 percent).[1] The Inventory reveals that federal land managers can and do tie up great portions of land and resources in states where they are major landholders. Particularly in the Western states and Alaska, significant amounts of oil and gas are removed from potential production for environmental protection, lagging land use planning processes, or administration priorities. Table 2 details the portion of land managed by federal agencies, the portion of that land managed for oil and gas resources, and how much of those resources are rendered unavailable.

According to the Inventory, 87.9 percent of all Alaskan acres managed by the federal government are closed to oil and gas operations. This ties up nearly half of all federally managed oil and a quarter of all federally managed natural gas resources. In a state that receives about 90 percent of its budget from oil and gas revenues, this limits state solvency and economic opportunity. In all, the Inventory estimates that 14 billion barrels of oil and 58 trillion cubic feet of natural gas are closed to development in the state of Alaska.

In January 2015, Obama proposed to expand wilderness designation to 64 percent of the Alaska National Wildlife Refuge (ANWR).  A wilderness designation is the highest level of protection available for federal lands, inhibiting resource development, roads, even permanent structures. Alaska has pushed back on this proposal; state officials are concerned about federal overreach and the budgetary implications of closing off an enormously resource-rich area (ANWR has somewhere on the order of 8 percent of all U.S. undiscovered oil reserves on an area that makes up just 7 percent of the 19 million acre refuge).

Western states don’t fare much better. Of 12 study areas and extrapolated oil and gas lands, nearly half is closed to development, representing 41 percent of oil and 25 percent of gas resources in the West. Some resource-rich regions are particularly tied up; 92 percent of the Ventura Basin in Southern California is closed to leasing by executive order and administrative priorities, and arduously slow land management planning shuts in most of eastern Nevada. Some 4.7 billion barrels of oil and 35 trillion cubic feet of natural gas are closed to development.

Eastern states have better prospects simply because federal agencies have very few land holdings east of the Mississippi River. These states largely have the ability to manage oil and gas resources themselves. Of that small portion of eastern lands with oil and gas resources managed by the federal government, some 51 percent are accessible to oil and gas interests. It’s worth noting that the Inventory may dramatically understate oil and gas resources available in the East; the study captured 201 million barrels of oil and 4.6 trillion cubic feet of natural gas, but relied on pre-fracking boom data that fails to capture the shale gas resources in the Appalachian Basin.

Other Enduring Obstacles at the Bureau of Land Management

The BLM has struggled to process applications and requests from industry. In 2013 and 2014, both the Government Accountability Office (GAO) and the Department of Interior Inspector General released reports suggesting that management issues at BLM slow down the permitting processes and prevent effective oversight of development projects.

EPAct 2005 attempted to improve BLM operations in two important ways. First, it initiated the Federal Permit Streamlining Pilot Project to improve the efficiency and speed with which BLM processed permits. The pilot afforded seven Western offices additional staff and funding. While the project is popular in the states where pilots were established, BLM has yet to develop a report on whether the pilot has been successful.

Second, it imposed a time limit on processing Applications for Permit to Drill (APD) of 30 days. GAO found that BLM has been unable to meet that target and fails to record data necessary to determining compliance with the target across the agency. The Inspector General identified issues with prioritization, supervision, and planning that make the APD approval process virtually indefinite. The result, as displayed in Figure 1, is an approval process that takes, on average, 7.5 months, significantly longer than states, which process permits within two months. 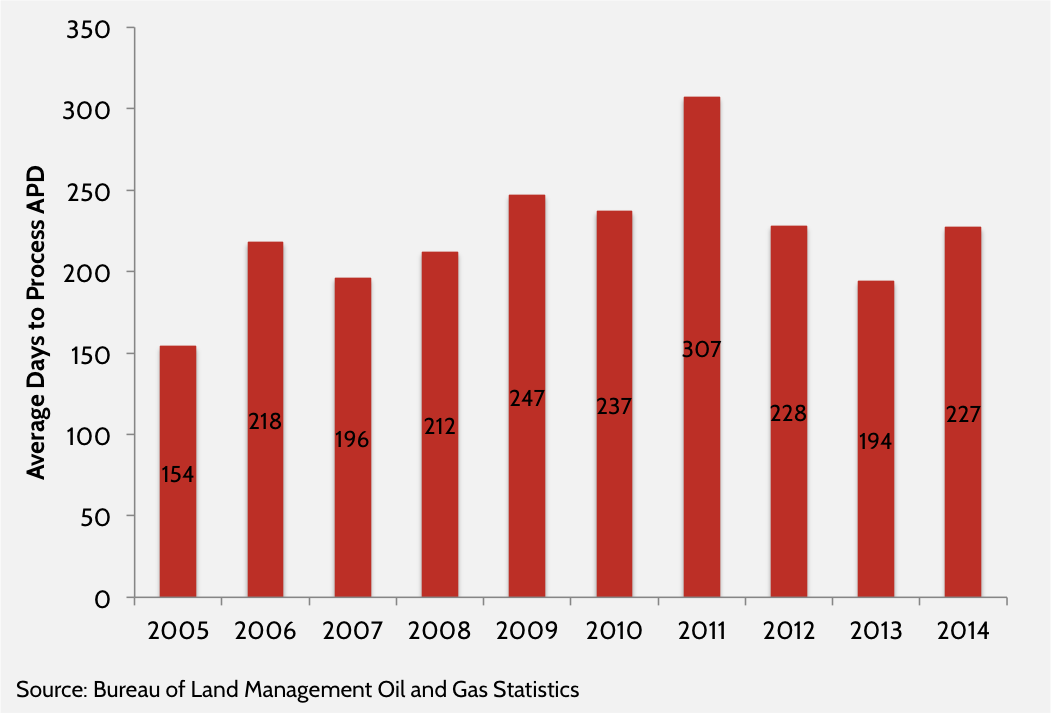 Note, too, that the number of approved APDs also declined rapidly just prior to the rebound in oil production, reflecting industry’s preference to work with states (Figure 2).

The BLM is also minimally receptive to industry requests to open lands for leasing. Industry can express interest in certain federal lands by nominating acreage for a lease sale. In the last three years of data, such nominations have nearly doubled, reflecting enthusiastic interest in pursuing development on public lands. This enthusiasm has not been reciprocated at BLM. Over the same 2011-2013 period, leases actually declined one fifth.  Figure 3 highlights the diverging trends between industry interest and BLM leasing activity. 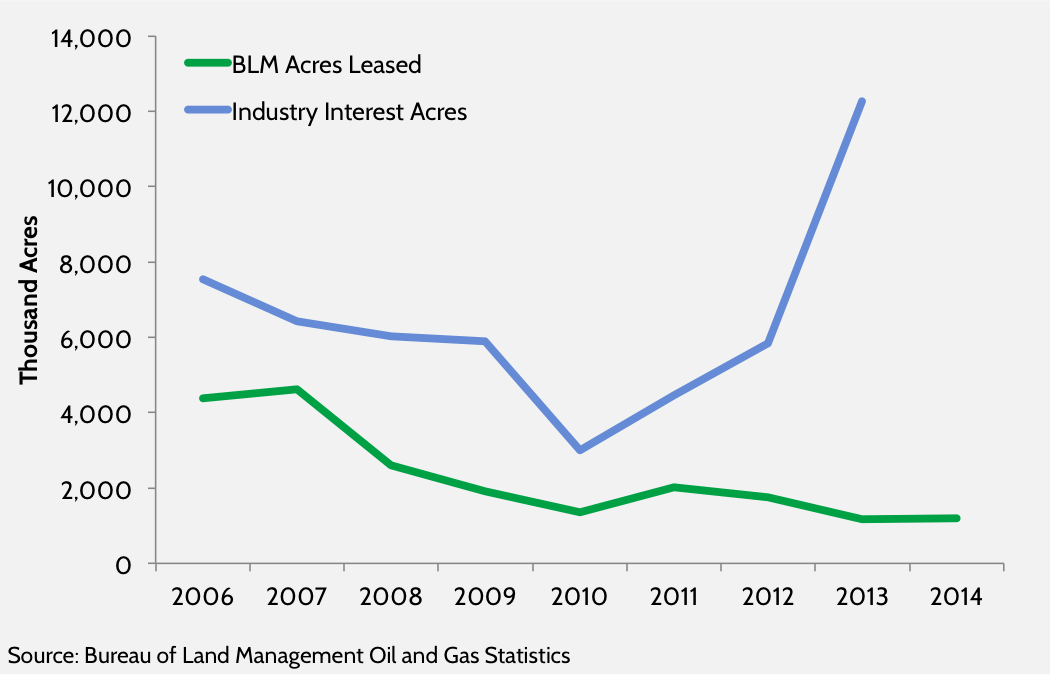 The issues at BLM are deeply rooted and certainly not restricted to the leasing and permitting process for oil and gas operations. The GAO and Inspector General reports also documented significant issues with environmental compliance, inspections, staffing, and performance metrics, suggesting BLM is due for an operational overhaul.

This administration’s land management policy as pertains to oil and gas is simply obsolete. Despite dramatic changes in domestic production technologies and trends, international trade, and domestic reserves, federal agencies manage oil and gas resources as if we were stuck in the volatile and scarce energy market of the 1970s. More than half of all oil resources and 40 percent of natural gas resources are kept locked away and off the market, directly impacting economic growth and job creation in resource-rich areas.

In regions where the federal government is a significant landholder, decisions about resource development are routed through a land use planning process that is predisposed to withdrawing resources from development. Moreover, land use management agencies, especially BLM, are plagued with management issues that further restrain access to the limited acreage open to energy development. There is a clear and defined need to improve land use planning processes and operations if the U.S. wishes to maintain dominance in oil and gas production.