Strengthening the U.S. Position as the Leading Oil and Gas Producer

The U.S. Energy Information Administration released new data in October that reframes the way Americans should think about oil: We are the leader of the pack. Recent production trends indicate that the U.S. has surpassed Russia as the world’s largest oil and gas producer, and will beat out Saudi Arabia as the leader in global oil production by 2015. Forecasts from industry suggest this production, along with dramatic growth in natural gas, will enable the U.S. to be nearly self-sufficient in energy by 2030.[1]

With increased production comes a host of benefits: increased employment, economic opportunity, and wage growth. But hanging on to this coveted top slot and all its perks is not a guarantee. The private sector has been driving the growth and expansion of domestic production, often in spite of the federal government’s limitations. With transportation and infrastructure improvements, and an opening of federal land leases, as well as shorter processing times for permits, the U.S. has a shot of maintaining their new title.

The recent dramatic increases in American oil production have the power to upend decades-old structural norms governing petroleum pricing and trade. Significant additional oil supply is eroding the collusive power of OPEC and keeping a lid on global pricing, even as demand in developing economies continues to grow. Production trends have helped drive down the domestic price of gasoline, previously regarded as an unlikely result of pro-development policies.

This paper will examine the broader trends of domestic oil production, detail the broad economic impacts of expansion, and explore opportunities for the federal government to take a more proactive role in maximizing oil production and economic growth.

The striking growth in oil production is propelled entirely by production of unconventional resources known as “tight oil” accessed using the same union of hydrofracking and horizontal drilling technologies that have opened up massive natural gas resources.[2] The oil-heavy formations are concentrated in the American interior, as detailed on the following map. 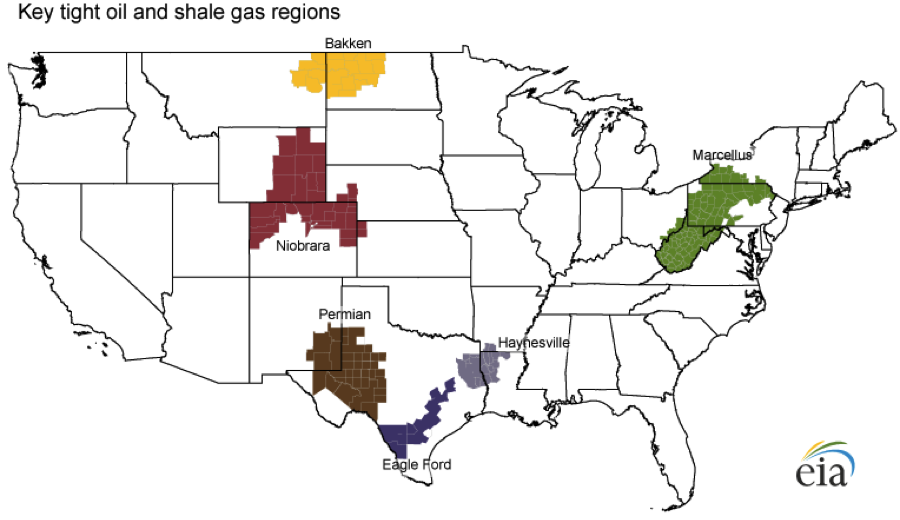 In November of 2013, the Permian Basin in West Texas will produce roughly 1.3 million barrels per day (bpd).[3] Eagle Ford production will exceed 1.2 million bpd, while the U.S.-side of the Bakken formation will produce roughly 970,000 bpd, and Niobrara 280 bpd. Supply from these four fields will satisfy nearly one fifth of American daily oil demand.

Fortunately, the U.S. is not just seeing leaps in oil quantity, but positive changes in quality as well. In combination, the production profile of crude oil is satisfying the diverse needs of our domestic refinery fleet, ensuring that North American supply is replacing imports from the Middle East, West Africa, and Central America.[4]

To better explore how these trends are playing out on the state level, the American Action Forum built a series of interactive energy maps that trace production and consumption patterns from 1999. Recent trends indicate exponential growth in oil production centered around major tight oil formations. 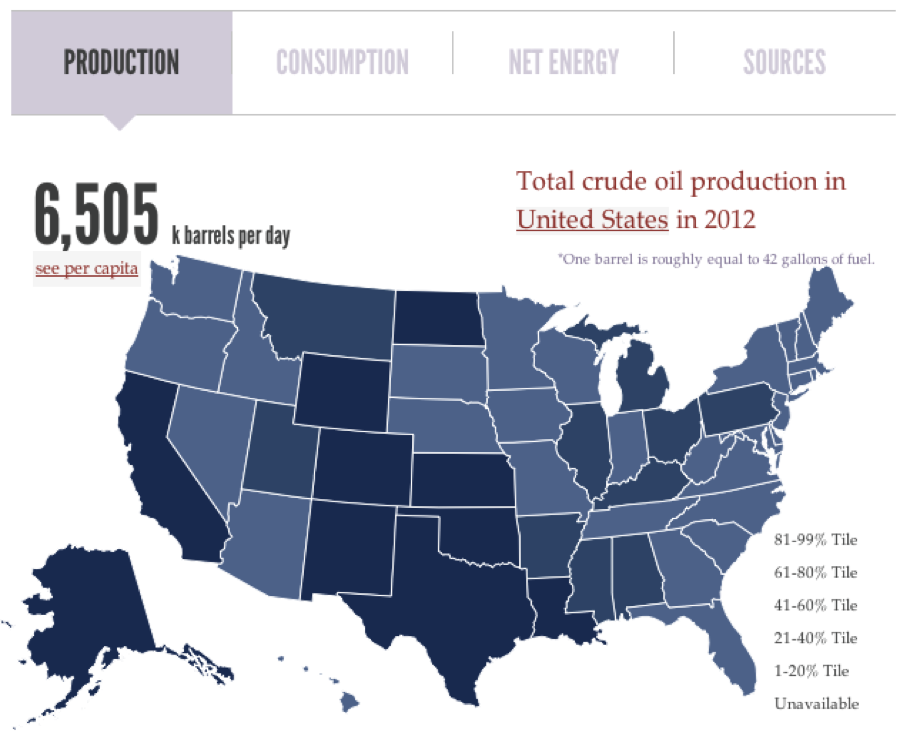 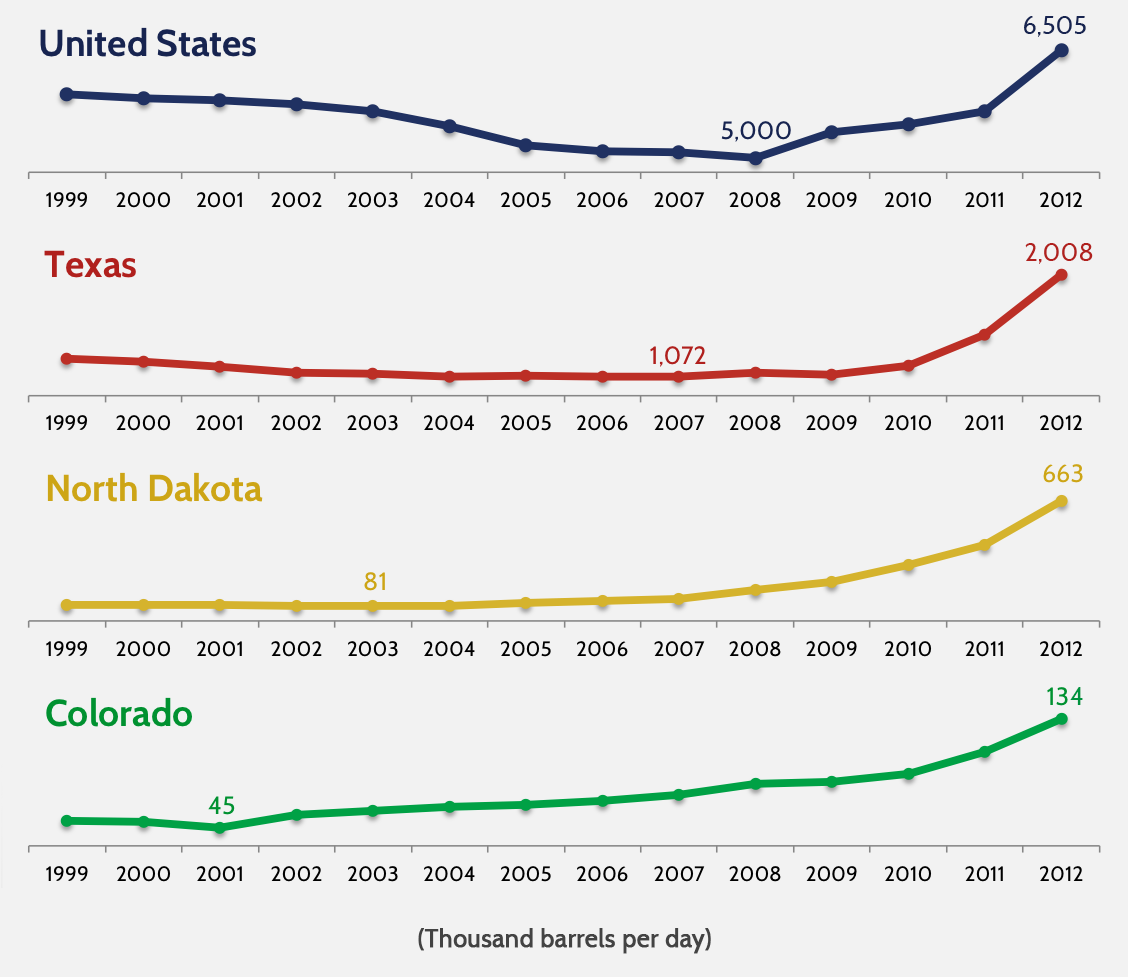 We focus here only on Texas, North Dakota, and Colorado as indicators of expansive oil production growth centered at tight oil formations. Note that combined production growth in just these three states between 2007 and 2012 – 1.6 million bpd – outpaces total U.S. supply growth during the period. This reflects lingering declines in conventional oil fields and the growing prominence of unconventional production. 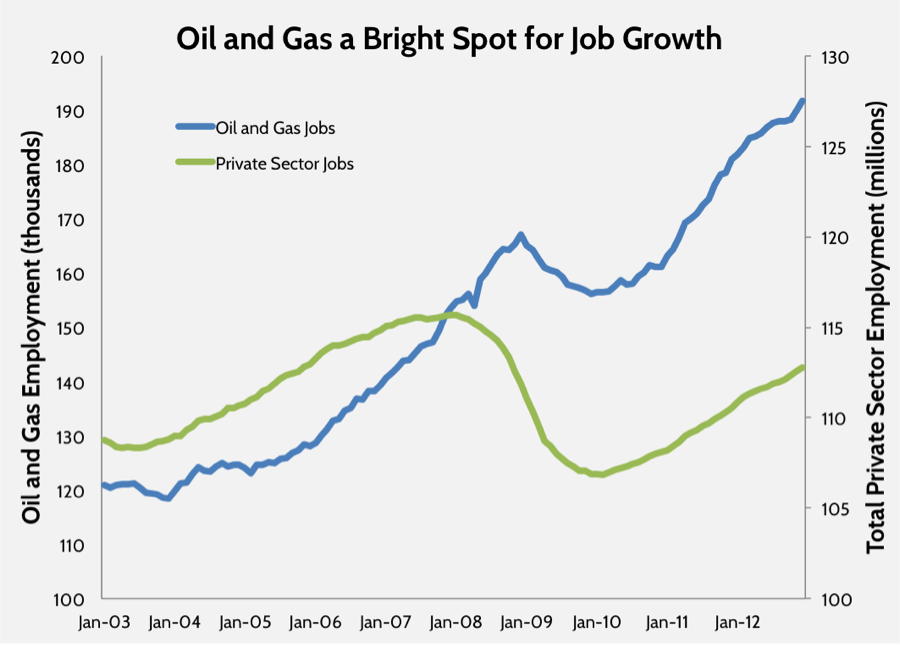 The oil boom is spilling over into the broader economy: creating new jobs in supply-chain products, chemicals manufacturing, transportation, and the service industry. Analysts estimate that for every job in oil and gas, four jobs are created elsewhere in the economy.[6] Since December 2009, the oil and gas boom has generated 164,000 jobs.

Oil prices are generally measured against two reference crude streams: West Texas Intermediate (WTI) and Brent.  Due to the quality of the different types of crude, WTI has typically traded at a price slightly above Brent. As detailed in the below chart, recent supply expansions have forced a major divergence in WTI and Brent pricing, depressed the price of WTI, and made American oil relatively cheap – a price difference of as much as $27.31 in September of 2011. 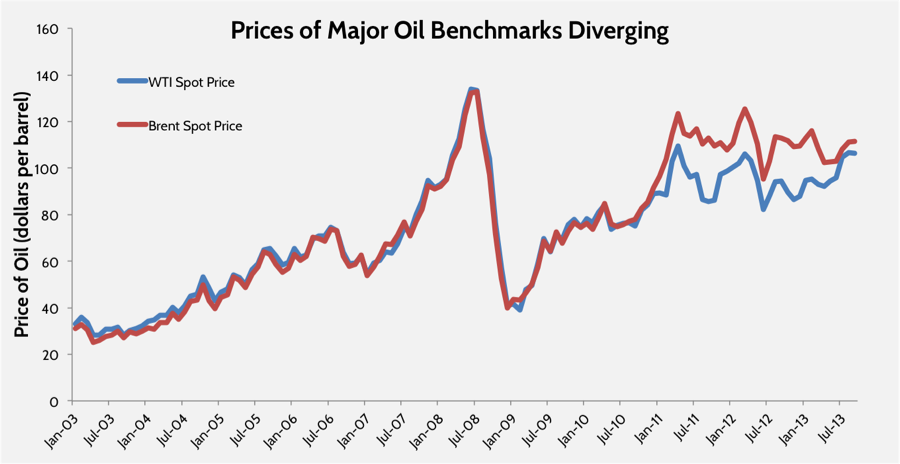 Domestic refineries are benefiting from this discount, increasingly relying on domestic crude streams and churning out valuable products – like diesel and gasoline. Their savings are passed forward to American consumers. Lower fuel prices will continue to benefit consumers and provide a boost to economic activity.

Encouraging Development from the Public Sector

So far the federal government has been an absent participant in expanding the production of oil and maximizing resulting benefits. Production has been centered on private lands and permitted by state governments, foregoing interaction with the federal regulatory apparatus. To ensure the U.S. retains its top global spot, it is time that the federal government engage to expand and encourage development of our unconventional oil resources.

This is changing quickly, as pipeline and shipping companies work quickly to catch up to these ever-growing oil flows. More than 2.6 million bpd in new pipeline capacity serving Eagle Ford and Permian basins is expected to come on-line by 2016. This oil will concentrate along the Texas Gulf Coast, potentially adding further to trade congestion. Shippers out of the Bakken are opting to put oil on rails, affording them the opportunity to seek out a more diverse pool of buyers and maximize profits while waiting for pipeline capacity to come on-line.

Approving these projects in a timely and predictable manner falls to government. The Federal Energy Regulatory Commission serves as the lead agency for interstate pipeline approvals, and partners with federal, state, and local agencies to comply with assorted environmental, cultural, and zoning regulations. A Government Accountability Office analysis found that interstate pipeline projects approved over the last two years took 558 days to work through the full process. Efforts to shorten that timeline and streamline the process across all stakeholder agencies are important to improving the domestic oil trade and lowering transportation costs.

Infrastructure serving oil by rail is approved largely outside the constructs of the federal regulatory system, though the Department of Transportation establishes safety standards for tank car selection and material classification. As more oil moves via rail car, and in light of three explosive oil train derailments in Canada and Alabama, these standards are changing. It is important that the FRA engage industry and assert these standards clearly and predictably.

While unconventional oil production is concentrated on private lands, U.S. federal lands and waters contain about 43 percent of all domestic reserves – 25.2 billion barrels of oil – and 72 percent of all oil shale acreage[7]. Capturing these resources is important to building energy production and security.

The Bureau of Land Management (BLM) begins with a planning process that considers all potential uses for a parcel of land that generally takes about three years. If land is approved for oil and gas drilling, companies can nominate this land for auction and bid on development rights. Auction winners then apply for a well permit to develop the lease. This Application for a Permit to Drill (APD) involves a number of informational requirements, and can involve lengthy environmental review. As of 2012, the processing time for an APD took an average of 228 days, down from 307 in 2011.[8]

Though the permit process is improving, oil developers have preferred to focus on privately held lands that can move into development on shorter timeframes. This interest is shifting; between 2010 and 2012, industry nearly doubled the number of acres it nominated for lease sale (see chart, “Federal Government Failing to Open Lands”). This interest has not been met with an increase in federal leasing. Over the same period, the number of new acres opened to leasing has increased just 30 percent; since the oil boom began in 2008, the number of leased acres each year has actually declined by a third. 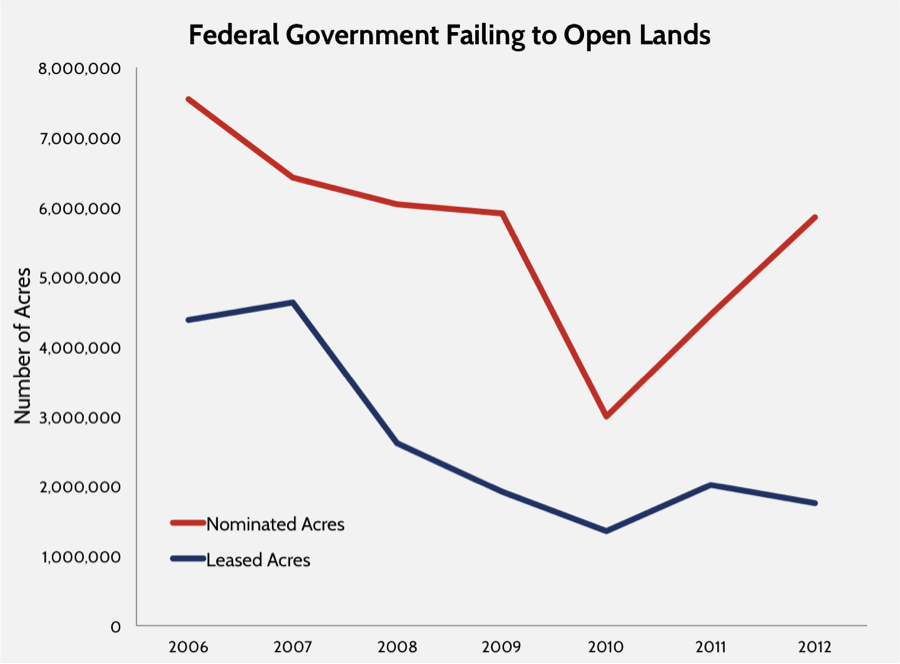 The Bureau of Land Management can open access to federal lands, increase the portion of nominated lease areas brought to auction, and continue to reduce the processing time for APDs.

The U.S. unconventional oil boom is complemented by major production gains in Canadian oil shale and a dramatic reform effort by the Mexican government to open oil and gas production opportunities to private investors.

Canada is our closest petroleum ally, supplying nearly 30 percent of all oil imports, but conflict over the Keystone XL (KXL) pipeline is straining this relationship.[9] Regardless of whether the president decides to approve this particular pipeline, the protracted, heavily politicized debate over KXL should not be repeated. Efforts to abate the regulatory uncertainty around these investments will help us restore our relationship with Canada and pursue greater energy cooperation throughout North America.

While the Mexican government is pursuing opportunities to invite private investment and boost natural resource production, Congress can move to approve a joint U.S.-Mexico deal that would expand Gulf of Mexico development opportunities. Since 2000, our shared maritime border has been closed to production. If accepted by Congress, this deal would establish a framework for developing resources, improve enforcement of safety and operational standards, and open Mexican waters to American producers, providing for greater development of the oil-rich Gulf.

The recent boom in oil, like in natural gas, can be traced back to an enormously successful public-private partnership that helped develop fracking and horizontal drilling technologies. Government can build upon this success with further engagement through public-private partnerships dedicated to the next generation of exploration innovations and establishing industry-wide best practices to improve output, environmental performance, and safety. Programs like the Environmental Protection Agency’s Natural Gas STAR or the Energy Department’s partnership on cybersecurity improve collaboration and cultivate institutional knowledge across industry.

Long-accepted as impossible, American supply dynamics are dropping domestic prices for oil and petroleum products. The international oil market is recalibrating around new centers of supply growth in North America.

It is time for the government to seize opportunities to improve oil transportation infrastructure, open up new finds to production, and improve collaboration across North America. Should this boom continue, the role of government will expand as the energy focus shifts to potential exports, the role of the strategic petroleum reserve, and how to prioritize development opportunities. Fully leveraged, this oil boom can put to rest the politics and policies of energy scarcity.

[2] The Forum report Fracking and the Natural Gas Boom highlights dramatic changes in natural gas production and the technology developments that enabled these trends.

[4] The international dynamics of the U.S. oil supply will be explored in a subsequent paper.

[8] A summary of average APD processing times from 2005 through 2012 can be found at http://www.blm.gov/wo/st/en/prog/energy/oil_and_gas/statistics/apd_chart.html

[9] The delay in approving KXL carries more than diplomatic costs: AAF analysis found that the delay will also force the U.S. to send an additional $7.7 billion to Middle Eastern oil suppliers, while losing 42,100 jobs and $2.1 billion in wages.