Connecting America’s Small Businesses to Foreign Buyers: The Role of the Export-Import Bank

Congress is faced with the decision to reauthorize the Export-Import Bank (Ex-Im).  Ex-Im is the official U.S. export credit agency (ECA) and levels the international playing field for U.S. exporters. Critics, however, contend that Ex-Im represents “crony capitalism,” citing a high proportion of its credit activity devoted to the largest U.S. exporters. A closer examination of Ex-Im activity reveals, however:

In short, the data do not support the notion that Ex-Im’s pattern of activity is more politically-driven than market oriented.

The charter of the Export-Import Bank (Ex-Im) is set to expire at the end of September 2014 unless reauthorized by Congress.[1] Acting as the official U.S. export credit agency (ECA), Ex-Im works to level the international playing field for U.S. exporters. Critics, however, contend that Ex-Im represents crony capitalism, citing a high proportion of its credit activity devoted to the largest U.S. exporters.

As policymakers consider the merits of reauthorizing the Ex-Im Bank for 2015 and beyond, continued Ex-Im financing will affect small and medium-sized enterprises (SMEs) as much as large exporters, perhaps more given the distinct challenges and risks they face when looking to export. In addition, networks of smaller businesses comprise supply chains of larger firms.  While the latter may produce the vast majority of U.S. exports and seek Ex-Im financing when facing fierce competition from foreign ECAs, the benefits accrue to the supply chain as a whole.

In its capacity as the official export credit agency of the United States, the Export-Import Bank’s objective is to boost U.S. exports using a range of financial products, including insurance, direct loans, and loan guarantees. Ex-Im financing is available when commercial institutions are unable or unwilling to provide it and serves companies of all sizes.

While there are many more SME exporters, large firms dominate U.S. exports.  In merchandise, manufacturing, and services exports, data has shown that large companies lead. One study, for example, shows that SMEs account for only 15 percent of manufacturing exports.[2] While it would seem that shows how small business exports have room to grow, larger companies can often expand production more easily and with possibly larger growth impacts. Small business suppliers also feed products into larger companies and benefit when the exports of the final product are expanded. For example, Boeing claims over 21,000 various suppliers and partners in the production of its products.[3]

If the primary goal of the Export-Import Bank is to boost exports and jobs, it must necessarily serve companies with as few limitations as possible on the allocation of credit across regions, industries, and firm sizes. Bank critics frequently ignore how Ex-Im financing is reflective of the composition of U.S. exports in regard to small businesses, and the support that is given through larger company supply chains.

The Export-Import Bank operates under a renewable charter that was most recently reauthorized in 2012 to operate through September 30, 2014.[4] Small business impacts are but one concern being weighed as policymakers discuss the merits of reauthorizing the Ex-Im Bank for 2015 and beyond. Ex-Im offers directs loans, loan guarantees, and export credit insurance for various term lengths. All obligations carry the full faith and credit of the United States. Authorizations supporting small businesses, however, are typically concentrated in the bank’s credit insurance program and working capital financing (See Figure 1). 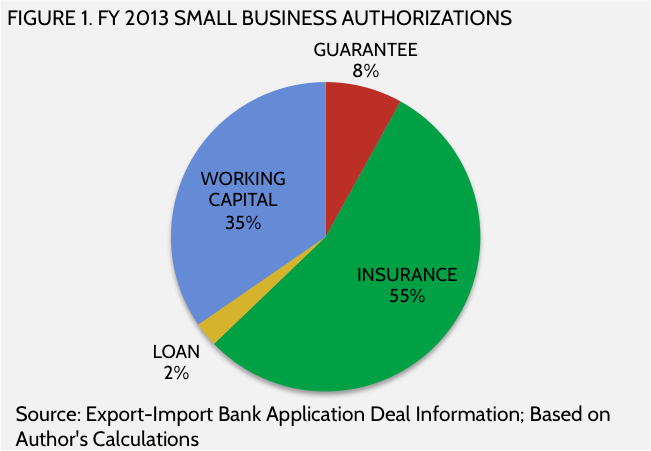 Short-term and medium-term export credit insurance, which made up 20 percent of total authorizations but 55 percent of small business authorizations in FY 2013, protect an exporter against the risk of nonpayment by a foreign buyer whether for commercial reasons (e.g. default, insolvency, or bankruptcy) or political reasons (e.g. war or nationalization). It reduces an exporter’s payment risk associated with shipping products internationally.

Small businesses also frequently take advantage of working capital loan guarantees (including supply chain finance guarantees) and, less frequently, working capital loans. Either through a direct loan or guarantee on loans made by qualified commercial banks, the Ex-Im’s working capital program is designed to help American businesses finance the daily operations needed to expand production for export. A guarantee, usually available for one year, can apply to either a single loan or a revolving line of credit and covers 90 percent of the outstanding balance when the borrower defaults, thereby decreasing the risk assumed by the lender. Working capital loans and guarantees made up 9.6 percent of all FY 2013 authorizations, but comprised 35 percent of small business authorizations.

The overarching function of the Export-Import Bank is to boost exports, and in doing so increase employment, through its financial products. But also by law, 20 percent of Ex-Im financing authorizations (by dollar amount) should support small business exports.[5] In practice, Ex-Im often comes close but does not consistently meet that target in any particular fiscal year (See Table 1). However, from FY 2004 to FY 2013, the percentage of small business authorizations averages 19.9 percent.

Ex-Im Lending During and After the Financial Crisis

During and following the financial crisis of 2007 and 2008, commercial banks tightened lending and faced new regulatory burdens (e.g. Basel III treatment of trade finance). Large and small firms alike turned to Ex-Im trade financing, resulting in a jump in total authorizations from a pre-crisis average of 2,717 authorizations to a post-crisis average of 3,562, a 31 percent increase. For small businesses, the number of authorizations jumped 35 percent, while authorization volume increased 135 percent from a pre-crisis average of $2.3 billion to $5.4 billion. Recognizing these new demands, Congress raised Ex-Im’s total level of allowable exposure to $140 billion, while making that increase dependent on new reporting requirements and a default rate less than two percent.

The commercial trade finance market however appears to be recovering and adjusting to new regulatory efforts;Shown in Figure 2, despite the falling amount of authorizations, the overall number increased by 1 percent; authorizations jumped 3 percent for small businesses. As the economy continues to recover and banks strengthen their balance sheets, commercial trade finance is expected to rebound (depending on new regulations), as it has been traditionally low-risk.[8]  With more robust commercial lending, Ex-Im volumes should fall, as the bank is mandated not to compete with private institutions but merely fill financing gaps.

Table 2 shows the top primary exporters associated with the highest number of small business authorizations in FY 2013. With individual authorizations ranging from six to 53, these exporters have geographically dispersed headquarters, produce goods and services in varying industries, and utilize different Ex-Im financing programs. Authorization amounts additionally range from $630,000 to $37.2 million. While overall authorizations have received criticism for concentrating on aircraft-related exports and other capital goods, small business authorizations support a variety of industries as shown in Table 2. Furthermore, if the primary objective of Ex-Im is to increase exports and jobs, allocation of credit across regions, industries, and firm sizes should have few limitations in contrast to current quotas and mandates (i.e. those for small businesses, minority- and women-owned businesses, sub-Saharan Africa, etc.).

Examples like this show how nuanced authorizations for large companies like General Electric truly are. In policy analyses of Ex-Im impacts, focusing solely on the primary exporter of a particular authorization erroneously fails to recognize the support that accrues to small businesses. Many small businesses, not all of which are reported by Ex-Im because they are not necessarily party to financing deals, are often involved in the production of high-value goods like airplanes and construction equipment by supplying parts or services necessary for the production of the finished good. With Ex-Im’s content policy requirements (generally acknowledged to be more stringent than foreign ECA competitors[12]), the exports receiving the most financing are also assuredly made with a majority of American supplies.

* WORKING CAPITAL
** THESE COMPANIES DO NOT QUALIFY AS A SMALL BUSINESS. INSTEAD, THEY ARE LIKELY LEAD EXPORTERS IN DEALS INVOLVING MULTIFPLE SMALL BUSINESS EXPORTERS. THE TOTAL AMOUNT STEMS FROM THE PORTION OF THE DEAL THAT SUPPORTS SMALL BUSINESSES.
SOURCE: U.S. EXPORT-IMPORT BANK FOIA APPLICATION DEAL & PARTICIPANT INFORMATION;[13][14] BASED ON AUTHOR CALCULATIONS

Previous AAF research documented the fierce competition from foreign ECAs and the market realities that make reauthorization of the Export-Import Bank a pragmatic trade policy. As policymakers consider the merits of reauthorizing the Ex-Im Bank for 2015 and beyond, the role that Ex-Im financing plays for SMEs is important due to the distinct challenges and risks they face when looking to export abroad and in the aftermath of the financial crisis. Yet perhaps more importantly, networks of small businesses comprise supply chains of larger firms, which not only produce the vast majority of U.S. exports but also seek Ex-Im financing when facing fierce competition from foreign ECAs. Reauthorizing the bank with reforms provides a chance for policymakers to streamline the bank’s functions, limit distortions, continue to add safeguards to protect taxpayers, and add transparency to bank operations.

[1] For a more detailed discussion of policy options for the 2014 reauthorization of Ex-Im, see: http://americanactionforum.org/research/reauthorizing-the-export-import-bank-a-policy-evaluation