“Year One”: Assessing the Biden Regulatory Record Against Recent Administrations

This week marks the completion of the Biden Administration’s first full year . As such, it is worthwhile to examine how this administration’s “Year One” regulatory record compares to those of its immediate predecessors. With RegRodeo data going back to at 2005, the American Action Forum (AAF) has been able to track how the overall Biden Administration’s first-year compares to the Trump and Obama Administrations during similar points in time. The data show that, due in large part to a handful of significant rulemakings, the Biden Administration has put forth the highest regulatory cost and paperwork burden totals by a wide margin. Furthermore, in examining additional data, AAF finds that President Biden has produced the highest number of executive orders of any president over the past half-century.

The two main regulatory metrics AAF regularly tracks for RegRodeo are total regulatory costs and annual paperwork burdens produced by each rulemaking. Since these data include the Biden Administration to-date as well as the full spans of the Obama and Trump Administrations, it is possible to go back and compare trends across all three. The following graphs illustrate the month-by-month cumulative volumes of costs and paperwork coming from final rules promulgated by the relevant administrations. “Month 1” covers January 21 (the first real day of an administration’s rulemaking period) through February 20.  Succeeding months continue that pattern through January 20 of the next year, one year from Inauguration Day. With more than $201 billion in costs, the Biden era to-date far outpaces its predecessors, with more than three times the costs of Obama’s first year and nearly 40 times those of Trump’s. The Biden total, however, only overtook Obama’s due to a massive Environmental Protection Agency (EPA) emission rule (discussed further in the next section) to put it over the edge in the final month. Perhaps somewhat surprisingly, the Trump Administration lead the administrations in regulatory costs for its first few months, hovering in the low billions of dollars. By the year’s mid-point (“Month 6”), however, both Biden and Obama shot past Trump with cost totals of $16 billion and $27 billion, respectively. The Biden Administration was also clearly the leader in terms of paperwork totals by year’s end. The 131 million annual hours of paperwork attached to its rules exceeded the Trump and Obama totals by 123 million and 105 million hours, respectively. This was, however, not the result of a year-end surge. Starting at around the middle of the year, the Biden total spiked noticeably and never came close to relinquishing its lead. Overall, the paperwork trends hewed closer to expectations. Outside of “Month 1,” the Trump Administration’s total was consistently far below the others, reaching a high point of 9.2 million hours in “Month 11.”

It is worth pointing out how singular rules provided either the largest increases or decreases across these metrics for each administration. As noted above, the most significant shift came in final month of the cost side. The cause of this spike was the EPA rule on “Revised 2023 and Later Model Year Light-Duty Vehicle Greenhouse Gas Emissions Standards.” Published on the last official day of 2021, this rule’s $180 billion in total costs make it the most expensive on record for RegRodeo. The Biden cost total would’ve remained in second place at roughly $21 billion without it, behind the Obama year-end total of nearly $65 billion.

The Biden paperwork lead comes primarily from two spikes in months 6 and 10. Perhaps unsurprisingly – given the overall societal impact of COVID-19 – the two actions that provided the brunt of these increases were Department of Labor (DOL) regulations promulgated to address risks presented by the pandemic. The first, entitled “Occupational Exposure to COVID-19; Emergency Temporary Standard,” established a series of safety standards and protocols for employers to undertake to help prevent workplace exposure to the virus. DOL estimated that the administrative burden attached to this rule would yield roughly 19.3 million hours of paperwork.

The second, entitled “COVID-19 Vaccination and Testing; Emergency Temporary Standard,” presumably builds off the same emergency authority cited in the previous rule. In this rule, however, DOL established a mandate that employers with more than 100 employees either require their employees to get vaccinated or submit to regular testing for COVID-19. DOL found that the estimated burden of this rule could push to nearly 80 million hours of paperwork. The status of this mandate is up in the air, though—just last week, the Supreme Court stayed the regulation under the argument that the rule exceeded DOL’s regulatory authority, even on an emergency basis.

These actions provide much of the explanation for the Biden Administration’s position in this analysis. It is, however, worth exploring notable shifts in the other administrations. For the Trump Administration the most significant month of cost-cutting came in “Month 11” with actions from DOL and the Department of Transportation (DOT) combining to produce approximately $2.5 billion in estimated cost savings. For the first Obama year, its high point in terms of costs (nearly $24.6 billion) came in the final month, thanks primarily to a DOT rule on “Positive Train Control Systems.” It is hardly surprising that the most significant impacts of any administration’s actions come to fruition at the tail end of the year. After all, it can often take months for an agency to propose a rule and several more for the agency to finalize it.

President Biden sent a message in his early days in office that he intended to leverage existing executive authorities, whether they be of obvious or presumed legality, to implement his agenda. From inauguration through the end of January 2021, President Biden signed 25 EOs.

While that pace has relented, President Biden issued more EOs in his first year than any recent predecessor with 77, and matched President Ford for the second most since 1953, according to the Office of the Federal Register (OFR). The chart below shows the number of EOs issued in the first full calendar year of each presidency going back to President Eisenhower. Since President Clinton, the number of first-year EOs has been largely trending upward. 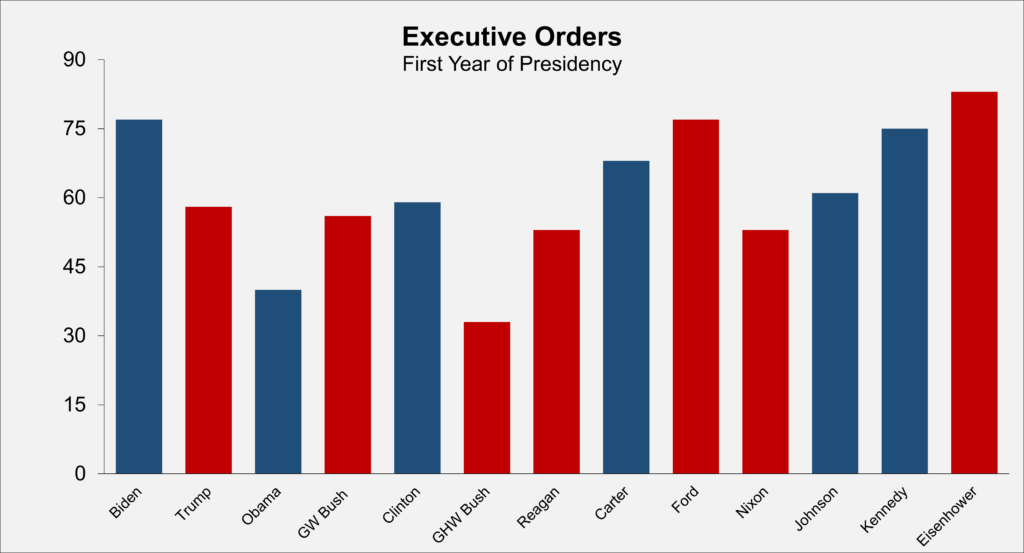 President Biden cited COVID-19 as a reason for many of his EOs. More than one-third (27) either directly relate to addressing the pandemic or mention COVID-19 in justifying a certain policy, according to the OFR. Several of these EOs had high profile regulatory implications.

Among the notable EOs directly addressing the pandemic, the costliest – in terms of estimated economic impact – is the EO on “Protecting Worker Health and Safety,” which led to a DOL rule on workplace COVID-19 mitigation policies for health care settings, another DOL rule requiring either vaccination or testing for all workers of employers with 100 or more employees (blocked last week by the U.S. Supreme Court), and a Department of Health and Human Services (HHS) rule requiring vaccinations for all workers in facilities participating in Medicare and Medicaid. These rules’ combined cost was an estimated $8.3 billion and added 79.7 million hours of annual paperwork burden. That does not include an EO requiring federal employees to be vaccinated.

Other EOs directly addressing the pandemic include one related to generating new therapies and increasing the capacity of the health care system, one setting out policies on domestic and international travel, and one calling on agencies to find ways to provide economic relief.

The COVID-19 pandemic was also used as justification in other broader EOs setting out wide-ranging policies designed to implement goals set out during the 2020 presidential campaign. These include EOs covering: climate change; reversals of several Trump Administration regulatory policies; Medicaid and the Affordable Care Act; and equity advancements for several historically disadvantaged and marginalized communities.

The span of January 21, 2021, through January 20, 2022, represented a historically prodigious year in the realm of regulatory activity. Federal agencies under the Biden Administration produced regulatory costs and paperwork burdens that exceeded the “Year One” totals produced under the past two administrations many times over. Also, according to available data going back even further, President Biden issued executive orders at a rate unmatched for nearly half a century. With much of his legislative agenda stalling – a trend that is unlikely to be reversed quickly – one can expect this historic pace of executive action to continue, if not increase, heading into 2022.