Base Erosion and Profit Shifting in a Global Economy

The Action Plan on Base Erosion and Profit Shifting (BEPS) is a sweeping initiative by the Organization for Economic Cooperation and Development (OECD) designed to reduce the ability of multinational firms to lower overall taxation by shifting profits to low-tax jurisdictions. Despite its complexity – full implementation would require changes in law in 31 countries and modification to some 3,000 tax treaties – BEPS is advancing quickly. Even if U.S. policymakers do not incorporate BEPS guidelines into U.S. tax law, changes in other countries could have large implications for U.S.-based multinational corporations.

In 2013, the OECD, acting at the request of the G20, released an action plan to address concerns over the ability of large multinational corporations to minimize taxation through sophisticated tax planning, and thus reduce tax revenues in affected nations. The diminution of a nation’s tax base through such tax planning is known as base erosion. Broadly, base erosion occurs when multinationals locate profits in low tax jurisdictions. This legal practice, known as profit shifting, therefore diminishes the tax base, and thus tax receipts, of nations that might otherwise claim tax on the profitable activity. The OECD initiated an Action Plan on Base Erosion and Profit Shifting (BEPS). The Action plan, or more colloquially the BEPS project, sets forth a number of areas of concern and corresponding approaches to reduce “double non-taxation,” and “double taxation” of corporate and individual income. This primer seeks to clarify the status, goals, and implications of the OECD’s BEPS project.

Genesis of the BEPS Project

In 2012, the finance ministers of  G20, expressed concern over base erosion and profit shifting and requested that the OECD, which had already been examining BEPS-related issues, report on the status of their initiative in time for the G20 finance ministers’ next meeting in February of 2013.[1] The resulting report, Addressing Base Erosion and Profit Shifting, identified 6 major elements of BEPS, and called for an action plan to address these factors.[2] The finance ministers endorsed the finding in the 2013 report, including the development of an action plan.[3] In July of 2013, the OECD released an action plan with 15 separate “actions,” and a timeline for deliverables that include draft and final rules as well as reports designed to address base erosion and profit shifting. The Action Plan was endorsed by both the G20 finance ministers and heads of government in July and September of 2013, respectively.[4]

Timeline and Status of BEPS Deliverables

The OECD Action Plan set forth 15 actions designed to limit double non-taxation, or “stateless” income, while precluding over-taxation or double-taxation of that income. The OECD set a fairly aggressive timetable for development of these actions given the complexity of the subject matter. Broadly, the OECD set three deadlines with a staggered release of 19 deliverables addressing the 15 actions (some work on certain actions include two phases) in September 2014, September 2015, and December 2015. 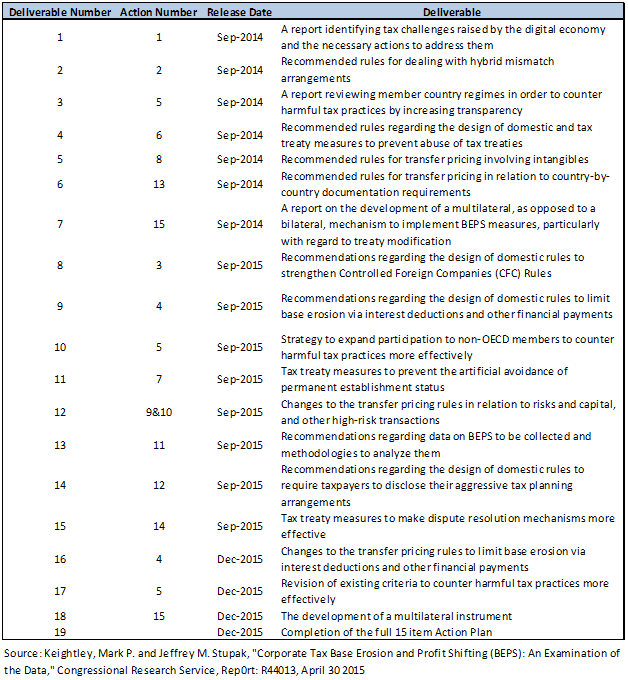 Establishing national tax policy is an essential aspect of sovereignty, which necessarily suggests that nations must take domestic action, through changes in their own laws and regulations, and modify tax treaties for the BEPS project rules to take effect. This is true, and indeed the breadth of the policy changes needed to implement the proposed rules in full – changes in law in 31 countries and modification to some 3,000 tax treaties – highlight the significance of the BEPS project and its potential implications on international tax policy.[6] Indeed, owing to the relative intransigence of U.S. policymakers on tax policy, one might assume that the BEPS project has little significance to U.S. economic interest. This assumption is misguided. To the extent that the BEPS rules are adopted by any nation in which a U.S. multinational corporation has operations, it would be exposed to these new rules. Inaction by the U.S. will likely not spare U.S. corporations’ exposure to these new rules.

While the rules remain in interim form, implementation processes for some of the released rules are already being developed. Indeed, participating countries have already agreed to three measures to advance implementation of a multilateral instrument for modifying tax treaties, an implementation package for new country-by-country reporting (action 13), and criteria for assessing when preferential tax regimes for intellectual property, such as patent boxes, are harmful.[7] Further work has been completed on the new country-by-country reporting requirement, with the OECD having released model legislation and treaty language to enact the new reporting requirement. The new requirement requires multinational companies to disclose certain information related to their activities globally to tax authorities in which they have operations. This is expected to be adopted by a number of participating countries, which would almost certainly affect U.S. interests.[8]

Another implication of the BEPS process reflects the impetus for the initiative in the first place: national concern about base erosion and profit shifting that could lead to unilateral tax changes. The concern about declining revenues and political reaction to tax avoidance of large companies has animated the BEPS project – but the same pressures also operate on individual nations, which could lead to tax changes affecting U.S. interests. Among the most glaring example is the so-called “Google Tax” in the U.K. that went into effect on April 1. The unilateral policy applies a 25 percent levy on income that the U.K. tax authority deems to have been artificially shifted out of the nation. This policy underscores concern from the U.S. business community that the BEPS project is ultimately targeted at large U.S. companies, which will be unduly burdened with new regulatory and compliance costs, as well has potentially higher tax burdens.

[2] The OECD report identified the following 6 elements as key drivers of BEPS: (1) hybrids and mismatches which generate arbitrage opportunities; (2) the residence-source tax balance, in the context in particular of the digital economy; (3) intragroup financing, with companies in high-tax countries being loaded with debt; (4) transfer pricing issues, such as the treatment of group synergies, location savings; (5) the effectiveness of anti-avoidance rules, which are often watered down because of heavy lobbying and competitive pressure; (6) the existence of preferential regimes. See: http://www.oecd.org/tax/addressing-base-erosion-and-profit-shifting-9789264192744-en.htm

[8] Clark Chandler, Stephen Blough, and Michael Plowgian, “Why U.S. Multinationals Need to Care About BEPS Even