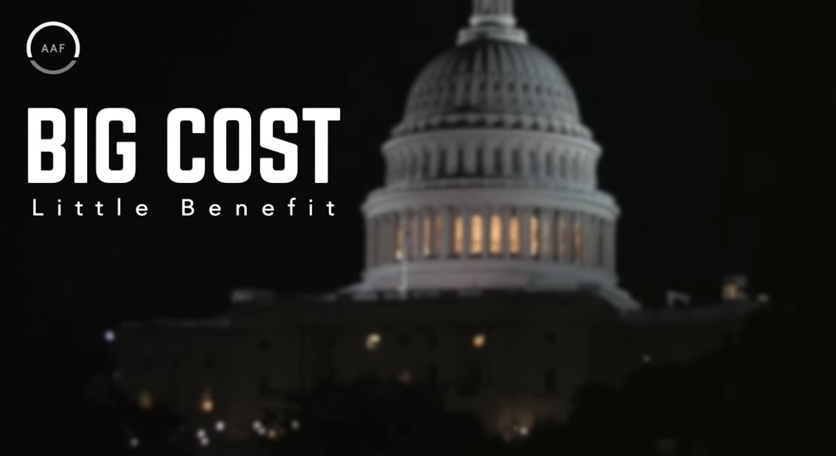 As the world meets in Paris at the United Nations (UN) Conference on Climate Change during the first two weeks in December, it is important to take note how the U.S. has already regulated greenhouse gases (GHGs). According to American Action Forum (AAF) research, regulators have already imposed $26 billion in annual costs to limit GHGs and have proposed an additional $1.7 billion. However, to meet President Obama’s climate goals the nation will have to spend up to $45 billion more each year by 2025.

What are the benefits of these investments? According to the Environmental Protection Agency (EPA) estimates, previous actions will avert a combined 0.0573 degrees Celsius of warming. Meeting the president’s 2025 goals could add reductions up to 0.125 degree Celsius. In other words, full achievement of the president’s climate goals will cost more than $73 billion in annual burdens to alleviate less than two-tenths of one degree of warming.

Below is a list of the five most significant GHG regulations since President Obama took office:

Combined, all 15 major rules aim to eliminate more than six billion tons of carbon dioxide (CO2) during the life of the rulemakings or roughly 860 million annually. For comparison, the U.S. emitted 6.1 billion tons in 2005. Yet, despite the heavy costs of regulation now and the questionable future benefits, regulators will continue to issue new rules to address climate change.

At the beginning of his administration, President Obama set a goal to reduce U.S. GHG emissions by 17 percent, below 2005 levels. Based on the latest Energy Information Administration (EIA) projections, the U.S. will emit 5.49 billion tons of GHG in 2020. (This baseline includes all regulatory and legislative actions as of October 2014.) A 17 percent reduction from 2005 levels means the U.S. needs to emit just slightly more than five billion tons in 2020, so the U.S. is still 303 million tons away from the goal.

That might not appear to be difficult, given the nation has already cut more than 900 million tons annually, but consider that time is hardly on the administration’s side. What’s more, relaxing the initial deadline for power plant compliance means the “Clean Power Plan” will only save 81 million tons of CO2 by 2020. Any similar regulation affecting stationary sources of GHG will likely reap only marginal cuts in the remaining four to five years.

The 2025 goals are even more daunting. According to EIA, the nation will emit 5.5 billion tons, barely an increase above 2020, but President Obama has called for a reduction of up to 28 percent below 2005 levels. This puts the president’s goal at 3.9 billion tons or a reduction of more than 1.2 billion tons by 2025. This includes EIA’s baseline, in additional to the Clean Power Plan, and pending proposals for a second round of heavy-duty truck efficiency and a new fracking measure. With all of these reductions assumed, the nation must still double its GHG cuts to date and then find additional reductions of more than 400 million tons of CO2. Even though the Clean Power Plan is scheduled to cut 265 million tons of GHGs by 2025, it is just a fraction of the remaining goal.

The graph below displays the heavy lifting required to meet the president’s targets: What will it cost to cut an additional 1.2 billion tons by 2025? If history is any guide, up to $45 billion in annual regulatory costs. To arrive at this figure, AAF examined the cost of reducing past GHG emissions from the Obama Administration. For example, examining the full slate of the administration’s regulatory actions on climate yields $261 billion in total costs to reduce more than seven billion tons of GHG. This yields a cost of $37.04 to prevent one ton of CO2 from entering the atmosphere. Comparing annual costs ($28 billion) to annual GHG reductions (902 million tons) results in a slightly lower figure: $31.11 to prevent the release of an additional ton of CO2.

With these figures in mind, we know in 2020 the nation will need to eliminate 303 million tons above EIA’s baseline and what is currently in proposed form. By 2025, that figure grows to 1.2 billion tons. Assuming the cost of eliminating CO2 remains constant for the next decade nets the following figures: $11 billion in additional annual costs by 2020 and $45.5 billion by 2025. Using the lower figure of $31.11 to reduce emissions could impose costs of $9.4 billion (greater than the burden of the Clean Power Plan) and $38.2 billion, respectively. The 2025 goals are the equivalent of two to three years’ worth of government-wide regulation.

With those costs pending, what’s left to regulate?

The administration has already targeted oil and natural gas wells twice, existing and new power plants, and the transportation sector. Yet, there are obviously more sources of GHG left for regulators.

EPA has already put out a proposed “Endangerment Finding” on aircraft emissions, although eminent regulation is unlikely until international regulators conclude their work. The fracking boom has generated plenty of sources of methane, beyond the well sites, that could be attractive for the Department of Interior or EPA.

In addition, the regulation of refineries or large manufacturing plants could be an attractive target in the future, although controlling GHG emissions from those sources will hardly net significant cuts. For example, the largest refinery (by emissions) in the U.S. emits 10.5 million tons of equivalent CO2 and there are only 145 refineries that report to EPA. Compare that to the power plant sector, where the largest facility emits 22.2 million tons and there are 1,572 facilities that report to EPA. In total, power plants emitted 2.1 billion metric tons of equivalent CO2 in 2013, compared to just 177 million tons for refineries. Suppose the nation eliminated 100 percent of refinery emissions by 2025; that would reduce the amount needed to reach the president’s 2025 goal by just 14 percent.

Finally, according to EPA data, electricity generation and transportation generated 58.5 percent of U.S. GHG emissions in 2013. Industrial emissions, which regulators will doubtless address during the next decade, consumed 21 percent. The next closest contributor of GHG emissions is the agricultural sector, at 8.8 percent. Hardly a popular villain, regulating farms, large or small, will be politically difficult for any administration, expensive, and likely to yield few returns. Regardless of which industry is next for regulators, the price of reducing an additional 1.2 billion tons will remain high.

There will be benefits from continuing to reduce GHGs. Some industries will flourish and others will shrink. There will be indeterminate health gains and some climate benefits. EPA admits climate benefits will remain small because climate change is a global problem and there is only so much a nation with four percent of the world’s population can do to avert the problem.

EPA has produced estimates from its past efforts to alleviate climate change. In five previous rules, EPA projected temperature declines ranging from 0.0042 Celsius to 0.0176 Celsius by the year 2100. Combined, previous EPA action to limit climate change could avert just 0.0573 degrees by 2100 (including the second round of heavy-duty trucks in this baseline). Those small reductions come at the total cost of more than $208 billion.

There are also GHGs reductions associated with these five measures. Combined, EPA projects they will eliminate 546 million annual tons of CO2. Using these metrics as a baseline, AAF assumed the same ratio of GHG reduction to temperature reduction for the president’s 2025 goal. Assuming the rate remains constant for the next decade, reducing emissions by an additional 1.2 billion tons could avert 0.125 degrees of warming. In other words, unless there is a drastic change in EPA’s modeling, meeting President Obama’s 2025 climate goal will reduce global temperature by 0.1823 degrees Celsius; a number that is difficult to measure, much less halt drastic climate change. This is also a high-end figure, as agencies typically give a range of temperature declines and AAF always assumed the most beneficial climate scenario.

What about monetizing the benefits? According to the White House, the “Social Cost of Carbon” (SCC) represents “an estimate of the economic damages associated with a small increase in carbon dioxide (CO2) emissions, conventionally one metric ton, in a given year.” It also represents a per ton monetary equivalent of the value of avoided climate change. For example, if a regulation reduced emissions by 265 million tons in 2025, it could yield $13.5 billion in climate benefits, assuming a discount rate of 3 percent.

The latter is important when comparing costs and benefits because costs are likely incurred initially and benefits are typically years, decades, or in the case of climate change, generations away. White House guidance dictates a discount rate of three and seven percent. “As a default position … a real discount rate of 7 percent should be used as a base-case for regulatory analysis.” However, for climate change, the administration has ignored its own guidance. It SCC analysis uses 5 percent, three percent, 2.5 percent, and an extreme that represents the most catastrophic effects of climate change. EPA completely omits a seven percent rate and instead concocts a 2.5 percent rate.

Assuming a discount rate of five percent, (the average of three and seven) as EPA does in one analysis, yields a $16 benefit per ton of CO2 eliminated in 2025. Given AAF’s analysis that the cost of eliminating a ton of CO2 ranges between $31 and $37, it appears the costs far exceed the benefits, at least at the five percent rate.

After $28 billion in annual regulatory costs to address climate change, the U.S. is hardly finished if it wants to meet the president’s goals. As much as $45 billion per year in regulatory burdens will likely be required to meet the 2025 benchmark, with just a 0.125-degree temperature reduction as a reward. As the U.S. approaches another round of climate negotiations, these figures demonstrate the American people have already shouldered a heavy burden to reduce emissions.