The American Action Forum recently released a study revealing that the price of the lowest-cost health insurance coverage for a 30 year old single male nonsmoker is set to increase by 260 percent between 2013 and 2014. Our 30 year old subject is part of a group known as “young invincibles,” 18-35 year olds whose participation in the health insurance exchanges is necessary in order for the markets to function properly. As a follow-up we have applied the same methodology to a 30 year old single female nonsmoker purchasing the lowest-cost bronze level plan and the results – including an average increase of 193 percent – are just as shocking.

Interactive Map: Premium Rate Increases for Women From 2013 to 2014*

There were no decreases in 2014 premium rates for healthy, 30 year old women under the exchange system as compared to the individual market in 2013. All 50 states and the District of Columbia saw insurance rate increases, with 42 of those states experiencing triple digit percentage increases in premiums for the lowest-priced coverage. Pre-ACA premiums for a 30 year old nonsmoking woman average $74.49 monthly, while post-ACA premiums average $188.72 per month, a $114.23, or 153 percent, increase. The average percent change between 2013 and 2014 minimum level plan monthly premiums is 193 percent, reflecting a nearly 2 to 1 ratio between the two sets of premiums. 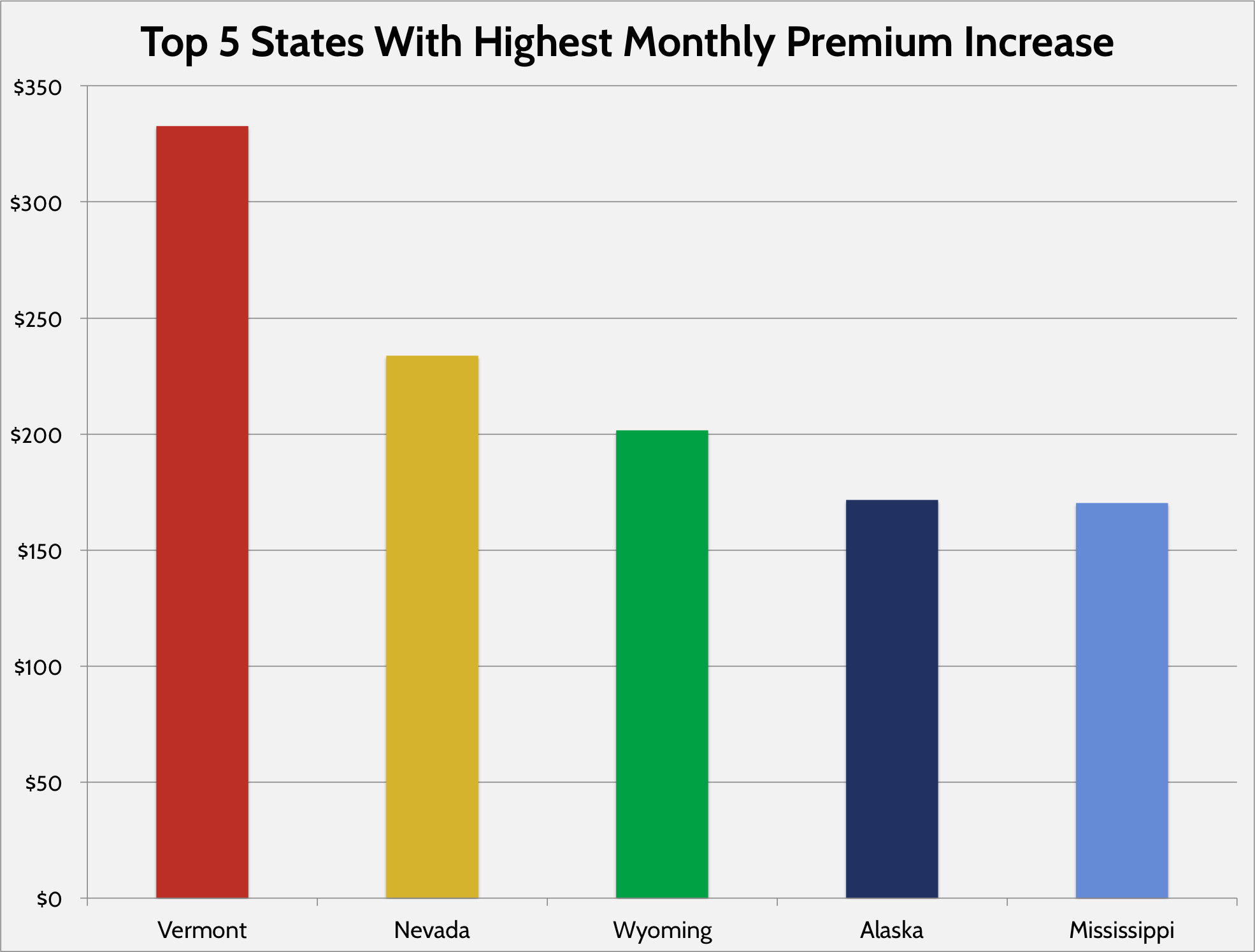 Similar to the results for men, the maximum monthly increase for women, 600 percent (a $332.69 increase), is found in Vermont. A minimum monthly increase of 4 percent was found in both Massachusetts and Rhode Island ($7.57 and $8.07 increases, respectively). The median increase is 183 percent (between Wyoming’s 186 percent increase and Colorado’s 180 percent increase) and 37 of the monthly increases range between 100 and 300 percent. States with the top five highest percent changes are (in order starting with the highest): Vermont, Nevada, Nebraska, Georgia, and Kansas. In addition, Vermont, Nevada, Wyoming, Alaska, and Mississippi all experience the highest actual dollar amount changes between 2013 and 2014.

Table 2 demonstrates that women faced with these increased premiums will only receive the benefit of a substantial offset if they are in the lowest income level.  The numbers below explore the premiums, subsidies, and penalties for a 30 year old single female purchasing bronze level coverage through the exchange in a state with Medicaid expansion.

For our hypothetical female subject, any salary above $36,052, or about 314 percent of FPL, would preclude her from receiving premium subsidies. It is at this level that our subject must pay the full amount for a bronze level insurance plan. Without any premium subsidies, our subject is expected to pay $236.58 per month for her coverage.  For those women actually eligible for subsidies, only those making 133 percent of the FPL will find it financially advantageous to “purchase” coverage in 2014 and 2015, as compared to paying the individual mandate penalty. Only in 2016 does it become financially advantageous for women making 175 percent FPL to purchase insurance. For all other income ranges during the coming years, the cost of purchasing subsidized health insurance is far greater than the cost of the penalty. Across the next three years, the cost of subsidized insurance is, on average, around 4 times the cost of the penalty.

These numbers, in concert with the 260 percent average increase in premiums for bronze level coverage for a 30 year old male nonsmoker, demonstrate just how damaging the ACA’s provisions are to the insurance market. The Obama administration estimates that it will need 2.7 million “young invincibles” to enroll via the exchanges in order for the system to function and to subsidize the costs of coverage for the sick and elderly. Both young men and young women, faced with exploding premiums, are likely to forego coverage in favor of paying the individual mandate penalty, as the costs of subsidized coverage in some instances are 10 times more than the penalty.