The growth in higher education costs is hardly a secret to parents and students. As evidenced by findings of a recent survey commissioned by the American Action Forum that found 92 percent of respondents agreed that college is too expensive. Published tuition and fees have outpaced inflation and increased 28 percent during the last ten years. There are countless factors driving these spikes, but increasingly, legislators and universities have targeted regulations as a primary culprit for rising costs. Indeed, the Department of Education today imposes more than double the amount of paperwork it did a decade ago, likely increasing the amount of administrative staff colleges and universities need to manage for compliance, and playing a role in higher tuition bills across the country.

The American Action Forum (AAF) found that the Department of Education currently imposes 85 million hours of paperwork, and more than 465 federal education forms, including 120 in postsecondary education, at a cost of more than $2.7 billion annually. The graph below details the unmistakable growth of paperwork requirements during the last ten years. 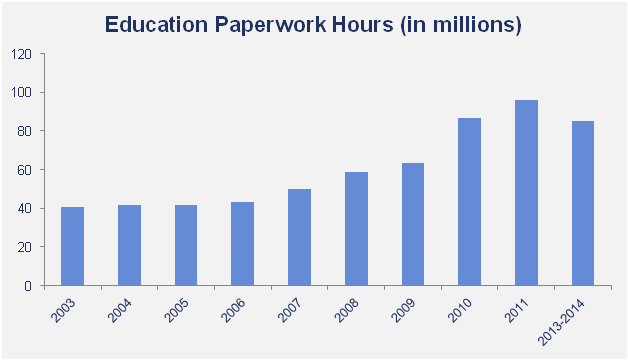 The largest paperwork requirement should be familiar to students who have applied for financial aid. The Free Application for Federal Student Aid (FAFSA) is one of the 15 affiliated student aid forms that combine for more than 26.1 million burden hours annually, or 31 percent of the Department of Education’s total.

Like many other agencies, the Department of Education rarely monetizes the burden of its paperwork. For example, it declines to report a cost for the 26.1 million-hour burden on students, parents, and post-secondary institutions. In fact, the agency lists the “Electronic Debit Account Application” for direct loans as its most expensive collection, at $233,046. However, if one simply applies the mean wage for a regulatory compliance officer ($32.10 per hour), to the agency’s 85 million hours of paperwork, the monetized burden exceeds $2.7 billion annually. This compares to the Department of Education’s figure of $375,756 for total paperwork compliance, or less than half-a-cent hourly.

There are several factors contributing to higher tuition: demand, government subsidies, and more educational services. However, recent commentators blame post-secondary administrative costs for the steady increase in tuition and fees. Evidence from the Bureau of Labor Statistics reveals that many institutions have aggressively expanded administrative staff during the last decade. The following data includes staffing levels at universities, trade schools, business schools, and junior colleges. 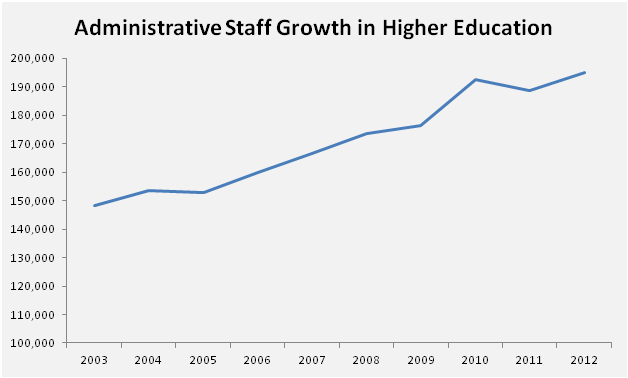 General administrative staff, which includes business and financial operations at postsecondary institutions, grew 31.5 percent during the last decade (from 148,190 in 2003 to 195,000 in 2012), with a 10 percent gain from 2009 to 2012, despite the Great Recession. Although staff growth is substantial, the graph above hardly captures the cost pressure of these increases. For example, in 2003 post-secondary institutions (including trade schools, junior colleges, and universities) paid approximately $7.1 billion for administrative staff expenses. By 2012, that figure jumped to $11.5 billion. In other words, institutions added $4.4 billion in costs for administrative staff alone.

Loan and credit counselors, and compliance officers who “investigate eligibility for, or conformity with, laws and regulations” have also grown steadily during the last decade. 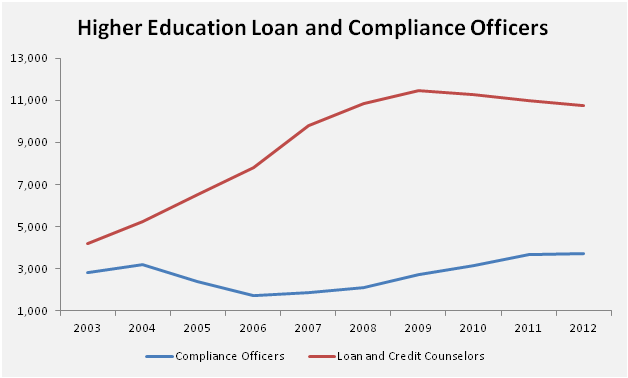 There has been a 32.8 percent growth in “compliance officers” in secondary education during the last decade, with 18 percent growth from 2010 to 2012. Loan and credit counselors more than doubled during the ten-year period (154 percent growth). Amazingly, the cost of wage and credit counselors increased from $142 million in 2003 to more than $508 million in 2012, a 256 percent increase. Someone has to comply with the doubling of the department’s paperwork requirements, and it appears that hiring for compliance and loan officers has mirrored increasing regulatory requirements.

With bipartisan inquiries surrounding Department of Education regulations and general discomfort about the regulatory state from institutions, it is clear that regulations play some role in what students ultimately pay for education.

Not surprisingly, legislators have taken note and scrutinized these new regulatory requirements. The U.S. Senate recently established a bipartisan task force to examine federal regulations and reporting requirements affecting post-secondary institutions. Its goal is to “make recommendations to reduce and streamline regulations, while protecting students, institutions and taxpayers.” Given current bipartisan views on regulatory policy, it is rare that Department of Education regulations can unite Congress, especially considering that the last major regulatory reform measure passed almost twenty years ago.

The department has taken the lead, to some extent, in efforts to cut reporting and paperwork requirements. Recently, the administration issued a final rule cutting 4 million hours of paperwork and $109 million in costs.

However, beyond a few exceptions, fundamental reform at the agency is sorely lacking. In their most recent retrospective regulatory update, the department conjured just 13 rulemakings that could reduce burdens or streamline the regulatory process, compared to its 303 current reporting requirements.

In 2011, a federal “Advisory Committee on Student Financial Assistance” conducted a comprehensive report on higher education regulations and concluded, “The overarching finding is that the higher education community perceives the regulations under the [Higher Education Act] to be unnecessarily burdensome.” While not too surprising, the report did prove useful as it identified 15 burdensome or redundant regulations that should be modernized.

The table below outlines the 15 regulations and their annual paperwork burden. One regulation appears on the list four times, cash management for student assistance, and imposes 59,999 burden hours. This collection illustrates the cumulative nature of regulatory burdens. Although cash management for student assistance is a single collection, it imposes four detailed reporting requirements that many institutions find burdensome.

Combined, these regulations account for 15 million hours of total paperwork, $486 million in annual costs, or roughly what post-secondary institutions spend on loan and credit counselors. This is approximately 17 percent of the Department of Education’s total paperwork burden, so reform in these areas could produce significant cost savings.

The Committee report is more than two years old, and just four associated paperwork requirements have been amended since the report. “Family Education Loan Program” requirements underwent the steepest drop, from 12.3 million hours to 8.2 million hours today, although this arguably has more to do with the elimination of the program than any concerted effort by Education. The three other revisions to paperwork reporting cut less than 100,000 burden hours combined.

The growth of regulation in higher education and the associated costs suggested by additional administrative hiring should lead to four immediate considerations on the part of the Department of Education:

It is hard to argue that additional regulations are not partially responsible for the rise in college tuition, as the number of administrative staff has grown in lock-step with the number of regulations impacting postsecondary education. Modernizing many of the Title-IV regulations that impact colleges and universities would go a long way toward reducing paperwork burdens and related cost implications, which in turn should help moderate the growth in tuition costs. As student loan volumes hit record levels and tuition costs continue to grow faster than the rate of inflation, the Department of Education should be looking for any opportunity to help stem the growth in tuition costs.