Amid all the hoopla of the off-year elections, and Democrats’ ongoing struggle to get to “yes” on a social spending package, this week kicked off the 9th annual open enrollment period for the Affordable Care Act’s (ACA) health insurance exchanges. And while it might seem like open enrollment never ended during year one of the Biden Administration—because it effectively didn’t—the start of open enrollment for the 2022 plan year is as good a time as any to take stock of where the ACA stands and where Congress wants to go next.

While data for all 50 states and the District of Columbia will take a while to accumulate, the Centers for Medicare and Medicaid Services (CMS) has released information on premiums and plan offerings for the 33 states participating in the federal exchange. The Biden Administration wants to highlight that 67 percent of 2021 enrollees can choose a plan for 2022 with a premium of less than $10 a month after applying federal subsidies. Of course, that’s because under the American Rescue Plan Act (ARP) the taxpayer is picking up a much larger share of individuals’ premiums,regardless of income, in 2021 and 2022 (Democrats hope to extend that through 2025 as part of the Build Back Better legislation). The actual average premium for a 27-year-old purchasing a benchmark Silver plan before subsidies will be $368 in 2022. But again, for more than two-thirds of enrollees the federal government will take care of at least $358 of that premium. Prior to the passage of ARP, 89 percent of 2021 federal exchange enrollees were receiving subsidies, while 92 percent of those who enrolled or changed plans during the never-ending, post-ARP special enrollment period were subsidy eligible.

Overall, according to CMS, premiums will be about 3 percent lower in 2022 and the average number insurers offering plans per rating area will jump from 4.5 in 2021 to 6.4 in 2022. The administration would like to take credit for these improvements, but it’s worth noting that this is simply a continuation of a trend that started under the Trump Administration. Insurer participation has increased every year since 2018, growing from 109 issuers and an average of 2.5 per rating area in 2018 to 171 issuers and 4.5 per rating area in 2021. Premiums also stabilized and then began their downward trajectory during the Trump years, dropping 10 percent since 2018 for an individual 27-year-old and 9 percent for a family of four.

Of course, for all the positive trend lines, the broader trajectory of the ACA leaves something to be desired. AAF’s Margaret Barnhorst points out in this week’s chart review (below) that when Congress was debating the ACA, the Congressional Budget Office (CBO) projected that by 2020 the law would result in 24.6 million people gaining individual market coverage through the exchanges. As it turns out, enrollment in 2020 was less than half that projection, standing at 10.7 million. Further, while much lower enrollment than expected has led to lower total spending, the per-enrollee cost in 2020 was almost 16 percent higher than what CBO anticipated. One might expect that such results—the ACAdelivering far below what was promised for higher-than expected per-capita costs—would give pause tocongressional Democrats before embarking on another massive expansion of the federal government’s role inhealth care. Their actual response, however, appears to be, “Let’s do it again!”

Since the Affordable Care Act marketplaces opened for enrollment in 2014, the program has seen significantly lower enrollment and higher costs per enrollee than originally predicted. As seen in the chart below, enrollment was expected to increase from 8.6 million in 2014 to 24.6 million in 2020, yet actual enrollment, reported as the average monthly number of individuals who had an active policy and paid their premium, was 6.3 million in 2014 and only 10.7 million in 2020. Total costs over the decade were lower than expected as a result of the lower enrollment, but costs per enrollee have been significantly higher than expected: From 2014-2020, actual costs per enrollee averaged around $830 above projections per year. This is in part because the share of the enrolled population receiving premium tax credits was greater than expected each year (77-79 percent estimated versus 84-87 percent actual). Read the insight here for more details and additional data sources. 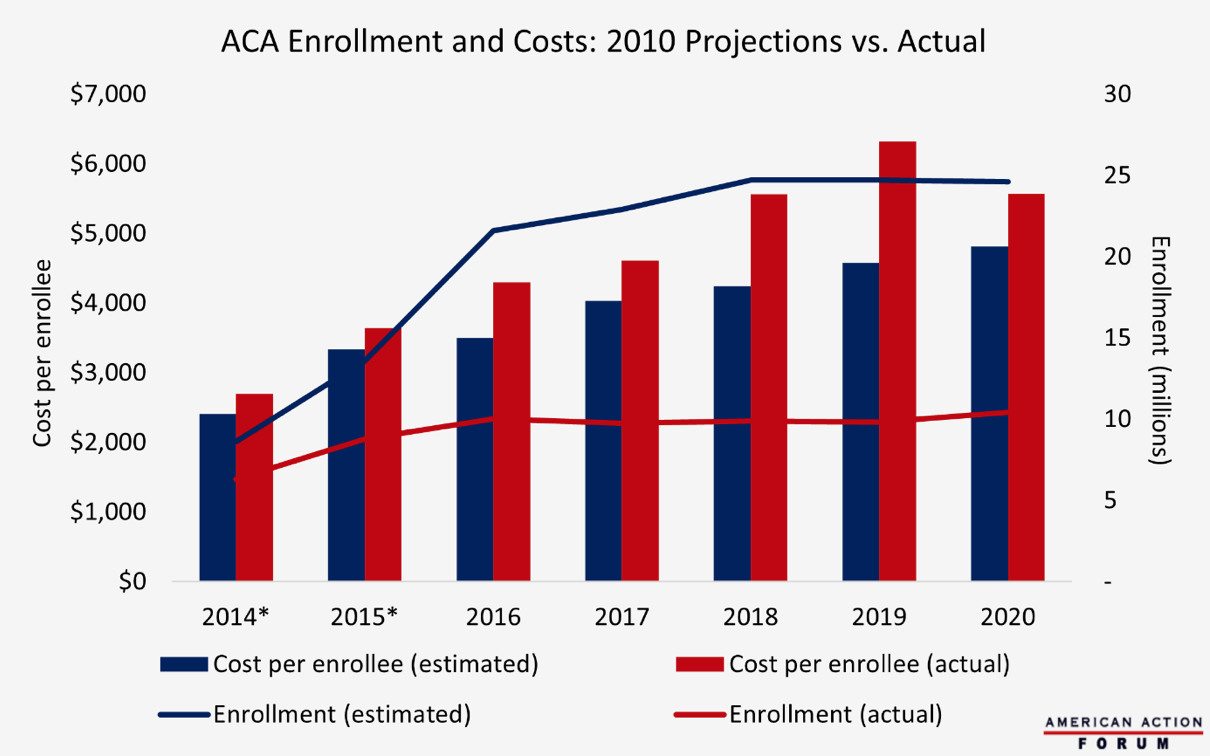 *Note: CMS began reporting “Average Monthly Effectuated Enrollment” for the year in 2016. For plan years 2014 and 2015, CMS released quarterly point-in-time estimates of enrollment; numbers from the December 2014 and December 2015 reports were used in the chart above. Average monthly effectuated enrollment was used above for plan years 2016 and beyond. 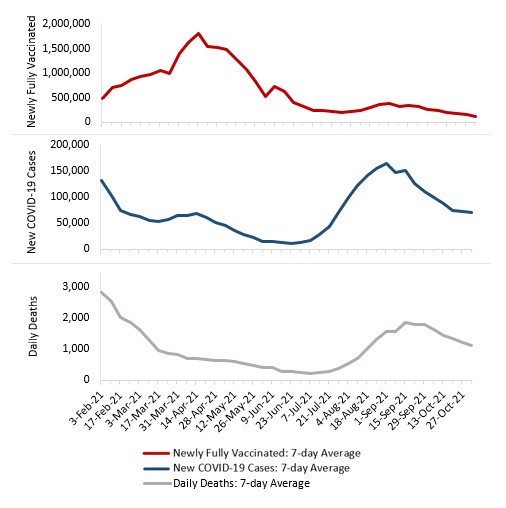