This week the Biden Administration rolled out another tranche of executive orders (EO) including one that will “take critical steps to reverse attacks on and strengthen Medicaid and the Affordable Care Act.” I’ll come back to those “critical steps” in a moment, but first let’s consider the broader narrative that is being advanced. According to the administration, over the last four years the Affordable Care Act (ACA) has been brutalized under a continuous, no-holds-barred assault by the Trump Administration, but now President Biden is beginning the process of reversing this damage through bold action. The reality does not align with this presentation of the facts.

The Trump Administration cut spending for ACA advertising and enrollment assistance, allowed people to purchase less comprehensive, short-term, limited-duration plans, expanded association health plans, and repealed the individual mandate penalty, all of which ACA supporters say have seriously damaged the law. Oddly enough, these same supporters are not complaining about the one Trump Administration policy that really was destabilizing—the decision to stop making cost-sharing reduction payments (CSRs) to insurers—because they’ve come to appreciate the way that particular policy gooses the subsidies enrollees receive.

Outside of the CSR payments, the Trump Administration’s policies appear to have had negligible impact on the marketplace. Instead, we’ve seen both ACA enrollment and premiums stabilize. Individual market enrollment through the law’s state-based and federally facilitated marketplaces peaked in 2016, with almost 12.7 million enrollees, before dropping by roughly 1.3 million over the succeeding four years. But most of that loss was in 2017 and 2018—amid huge premium spikes—and enrollment was effectively stable between 2019 and 2020. Further, indications are that enrollment may have increased slightly in 2021. The Centers for Medicare and Medicaid Services (CMS) reported earlier this month that total enrollment in just the 36 states using the federally facilitated marketplace is virtually identical to 2020, even though New Jersey and Pennsylvania and their 500,000 plus enrollees switched to state-based exchanges in 2021.

Still, you might wonder what critical steps President Biden took this week to reverse these attacks. First, Biden is ordering a three-month special enrollment period (SEP) starting February 15th, during which people, including those who have lost their jobs because of COVID-19, will be able to sign up for coverage. This may not have much of an impact though, since job loss automatically triggers SEP eligibility. Second, the EO instructs agencies to think really hard about other actions they might be able to take down the road, particularly with regard to clawing back agreements with state Medicaid programs implementing work requirements.

Now to be fair, I actually think the SEP is a harmless, if largely unnecessary, action and advocated for the Trump Administration to order one last year to avoid unnecessary political fire over the issue. But the reality remains that the last three years have seen a marked stabilization of the individual market at odds with the Biden Administration’s talking points, and the president’s actions today are largely window dressing.

A report from Castlight Health based on 2.5 billion medical claims during the first month of the pandemic shows that there was a large variance in the cost of a COVID-19 diagnosis across major metropolitan areas, as well as within individual markets at different sites of care. While the cost of a COVID-19 test was fairly consistent across a single metropolitan area regardless of site of care, the total cost of a visit showed significant deviation. For example, the charge for a visit to a New York City emergency department for COVID-19 diagnosis averaged $2,320.94, while the charge for diagnosis at a primary care doctor averaged $235.43.

These cost discrepancies are not unique to diagnosing COVID-19. The average cost of an emergency department visit is 12 times higher than a primary care visit and 10 times higher than an urgent care visit. In an estimated two-thirds of these cases, emergency care is not required. The higher charge can largely be accounted for by the higher operating costs that emergency departments face, meaning higher facility fees for simply stepping foot in the care site. 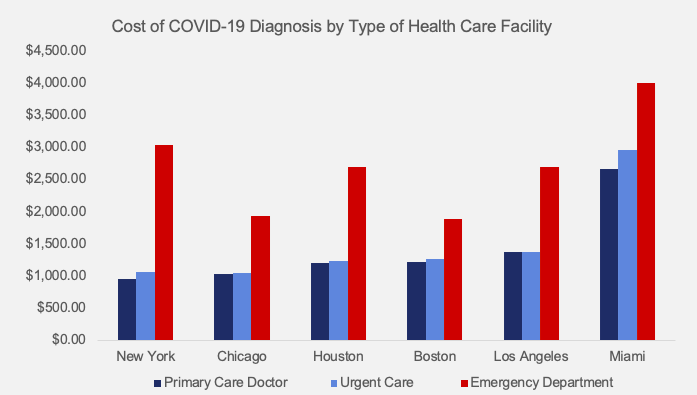 Axios: Vaccine hesitancy is decreasing in the U.S.

New York Times: With All Eyes on Covid-19, Drug-Resistant Infections Crept In